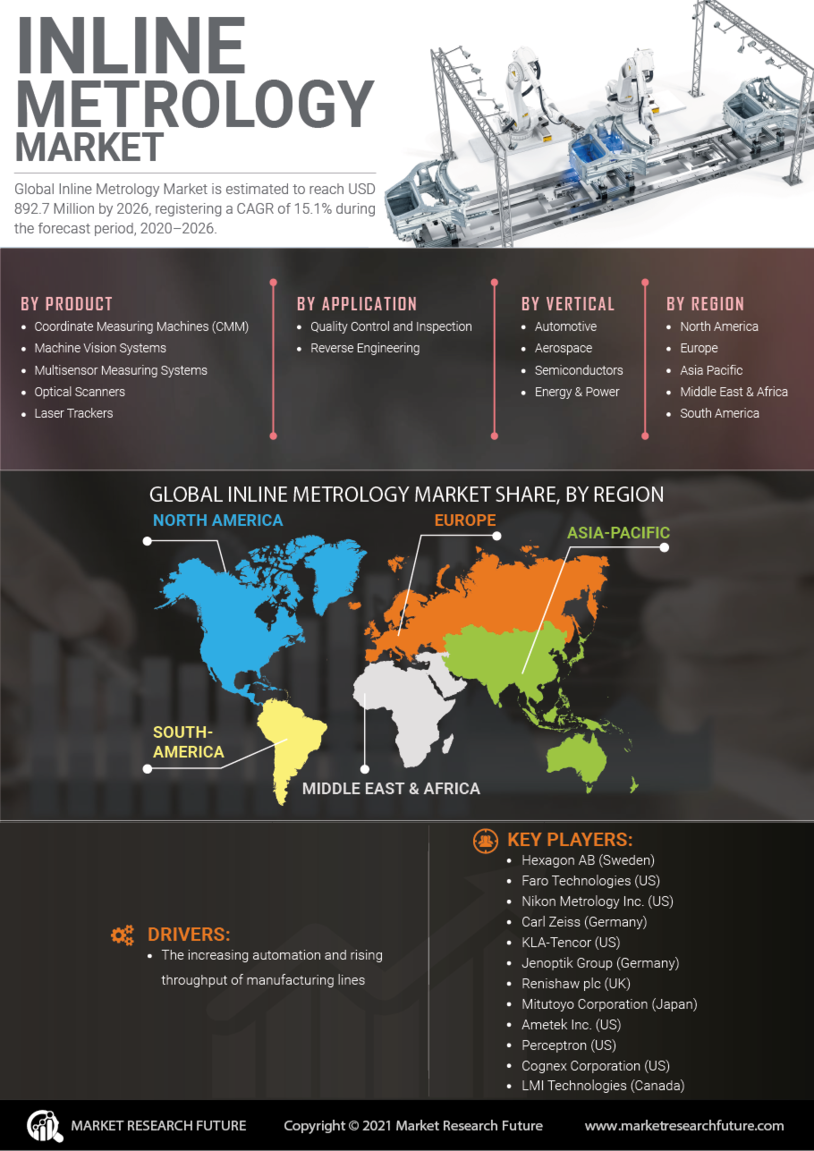 The Global Inline Metrology Market Size is expected to reach USD 892.7 Million by the end of the Inline Metrology Market Forecast, registering a CAGR of 15.1% during the forecast period. Automated, reliable, and non-destructive measurements of items and equipment in a moving manufacturing line are referred to as inline metrology. The requirement for effective quality control and speedy inline metrology systems for data collecting and statistical data analysis has grown as manufacturing lines have become more automated and throughput has increased. Photovoltaics, OLED/OPV, displays, touch screens, and glass coatings are all common uses for inline metrology systems. Quality control operations take place in two places: laboratories, where article components are initially digitized offline using contact-based technologies, and factories, where parts are inspected in fast-moving inline processes utilizing non-contact optical methods. One of the most significant differences between metrology and inline inspection environments is speed. Non-contact scanning of the targets is required for inline inspection. The most prevalent digitizing methods are laser triangulation and structured light 3D sensors.

Scanning, measuring, and controlling all things inline while a part is in motion is referred to as inline metrology. It entails accurate, automated, quick, and non-destructive measurements that are fully integrated into a production line for total process control. It can be incorporated into the systems that transport data between processing stages. As a result, it is used in reverse engineering, quality control & inspection, and other applications in semiconductors, aerospace, automotive, energy & power, medical, and other end-uses. Electronic system innovations are paving the road for the inline metrology business to expand.

Like other markets, the COVID-19 outbreak has had a severe impact on the global Inline Metrology Market Size and Inline Metrology Market Share. As workers have stayed at home, global manufacturers have struggled to create products requiring inline metrology, as well as develop or improve current inline metrology methods, disrupting the global supply chain.

COVID-19 has a temporary influence on inline metrology market trends because only the production and supply chain were halted. The production, supply networks, and demand for these products will gradually improve as the situation improves. This will allow businesses to consider ways to increase output, conduct technological research, and improve their current products.

The dearth of expertise required to effectively manage inline metrology systems, as well as the high costs associated with establishing inline metrology facilities, may stymie industry expansion. Furthermore, the market is being hampered by the continued acceptance of predictive analytics by new business models, the decreasing deployment of AI technology in the automotive industry, and the diminishing need for customized solutions from autos.

During the historic forecast period, Perceptron formed a cooperation with Coherixinc. Because Coherix Inc. manufactures and develops high-definition and high-speed 3D vision solutions for electronics, semiconductors, and automotive applications, increasing perceptron's manufacturing capability in the machine vision sector will be helpful. Manufacturers have been concentrating on developing new goods for certain applications because demand varies depending on the application. Inline metrology is becoming increasingly popular in applications such as touch panels, photovoltaics, displays, OLED/OPV, glass coating, and other devices in the electronics sector. Non-contact measurements can be used to regulate the industrial thin-film production process. In addition, these inline metrology systems can be customized.

The Inline Metrology Market Report has been bifurcated into various segments that will help the market to achieve the highest CAGR during the forecast period. The market segments are as follows:

North America now dominates the worldwide market and is anticipated to remain so for the foreseeable future. The area of Asia-Pacific, on the other hand, is predicted to develop at the fastest rate during the forecast period. The market in this region is likely to be fueled by the growing usage of AI and IoT technologies, as well as the increasing integration of automation in industrial facilities. Due to the significant economic growth seen by major nations in the region, such as China and India, APAC is expected to have the greatest share of the market in terms of value. Inline metrology systems are used for quality control inspections at various automobile and electronics production industries in the region. As a result, inline metrology solutions are projected to be in high demand in this region because of the presence of various Inline Metrology Market Key Players.

Because there are so many competitors in the industrial metrology market, it is highly competitive. The market is moderately concentrated, with the leading players employing techniques such as product innovation and mergers and acquisitions to gain a competitive advantage. Companies are also pursuing a variety of growth and expansion tactics to get a competitive edge in the market. These companies are focused on innovation and, as a result, spend in R&D to create cost-effective product portfolios. There have been recent mergers and acquisitions among the top competitors, which is a technique used by businesses to expand their access to customers. The major Inline Metrology Market Key Players are as follows:

At what CAGR is the global inline metrology market projected to grow in the forecast period (2020 -2026)?

Global inline metrology market is projected to grow at approximately 15.1% CAGR during the assessment period (2020 -2026).

How much is the global inline metrology market worth in the future?

The valuation of the global inline metrology market is estimated to increase to USD 892.7 MN by the end of 2026.

Which region holds the largest share in the global inline metrology market?

Who are the top players in the global inline metrology market?

Inline Metrology Market is Expected to Showcase Rampant Growth Over 2026