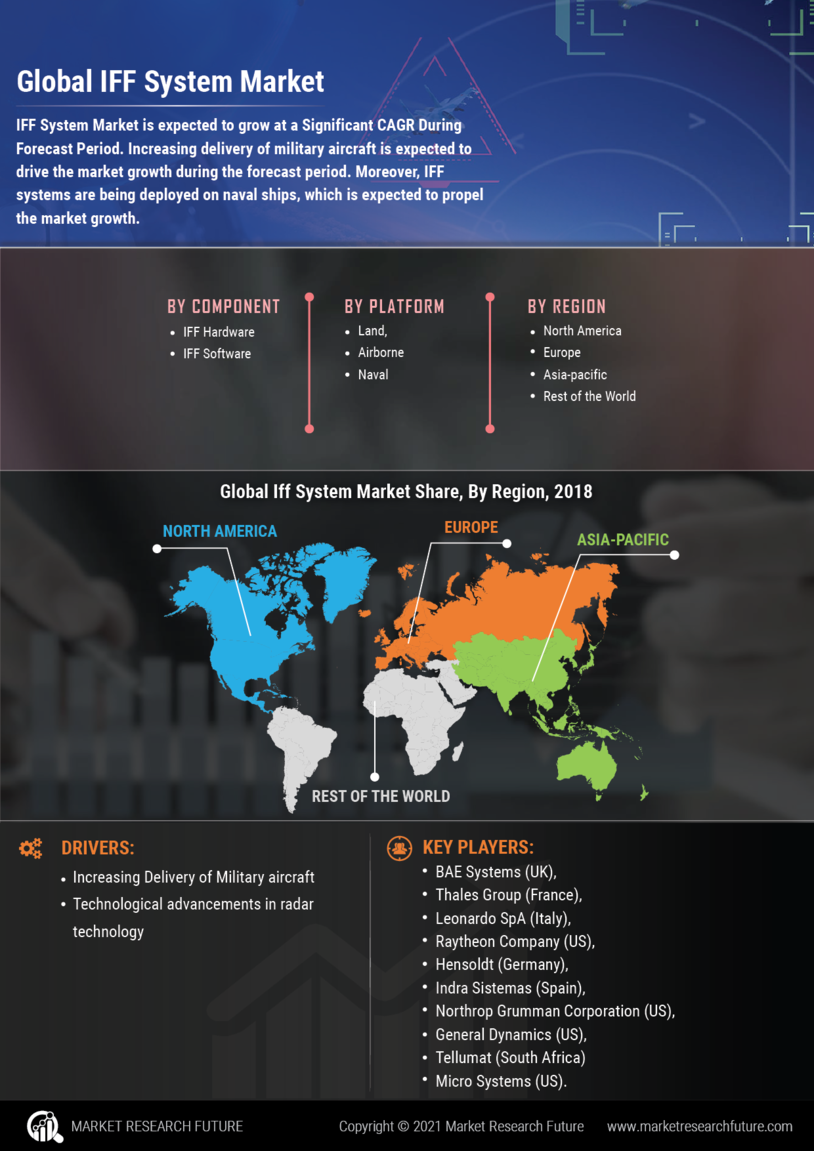 
The IFF System Market is predicted to account for a significant increase in the Compound Annual Growth Rate (CAGR) of more than 8% in the forecasted period. It is subjected to witnessing market share and revenue growth, valued millions, during the forecasted years. IFF or Identification, friend or foe is an advanced cryptographic detection system designed to command and controls the Identification of the opposing militant or hostile missiles and aircrafts alike. This technology is the development of the already present radar technology used in military bases for various purposes.

Since this identification system effectively detects if an aircraft or vehicle is a similar friend or opposing foe, it has benefited many dire military situations by protecting from destructive events. With the rising usage of these IFF systems, the revenue and shares of the IFF System Market are increasing significantly. Moreover, several governments of nations across the globe are investing in the technological development of the aircraft transponder market, which has also contributed to the size of the respective markets.

These advanced Radar Identification systems are also used for on-air traffic control in airports. Still, they are mostly used in the military for interrogation and Identification of friendly or unfriendly forces, vehicles, and aircraft. In this detailed IFF market analysis, all the aspects of the respective market are covered, providing an efficient iff system market forecast of the global market.

Following the latest surveys and statistics in view, it is noted that numerous industries and markets have been greatly affected due to the rise of the COVID-19 pandemic. With more government investments in essential and health care goods, the non-essential product manufacturers have been negatively affected. The IFF System Market requires a huge capital investment to commence the research and manufacturing of the IFF systems. Due to the low capital investments provided by the government, the respective market is witnessing extreme manufacturing and development disruptions. But the recent statistics have also stated that the aircraft transponder market is subjected to improvement post the pandemic.

The global IFF System Market is subjected to rapid annual growth during the forecasted period. This rising growth is the increasing investments of many regions in modernizing and developing the already present military infrastructure.

Other drivers include the rising need for advanced detection devices that are run on the latest technologies, such as the developments related to the aircraft transponder market. Apart from that, many military operations include IFF Cloud computing and adaptation of other machine learning, IoT, and AI-induced technologies in the respective market.

Opportunities of the Global Market

As per the latest reports, the global IFF market is open to a vast field of opportunities. The inclusion of electronic warfare and satellite-based systems in the iff system for the military had opened vast possibilities in the respective market.

Apart from this,Identification Friend or Foe (IFF) has also witnessed increasing interest of the government of various potential nations; this will provide future growth scope and new opportunities in this market.

As showcased in several IFF System Market analysis reports, the factors that can act as major market restraints are network security issues. Apart from that, other restraint-ridden factors are the increased reliance on technology and other related factors.

The major challenges that hinder the growth of the various iff system market segment profiles are the stringent rules and regulations provided by the defense industry.

Along with these strict laws, the low economic status of many nations worldwide, as a result of the impact of the pandemic, there is a reduced flow of government investments for facilitating developments in the IFF System Market.

Viewing the IFF market analysis, many nations across the globe are subjected to seeing a steady growth during the forecasted years.

But the targeted growth regions like the Asia-Pacific and European countries are predicted to experience an increase in the CAGR during the forecasted years is due to the ring demands of iff system in aircraft in the military.

Under the IFF System Market analysis, it is to be noted that the global IFF industry is segmented into three important divisions, namely by platform, component, and by region.

Based on the platform segmentation, the IFF System Market is divided into airborne, land, and naval platform type, with the land classification to reach the highest CAGR during the forecast years due to the investments for advancements in the iff rail system along with other sectors as well.

Although all the classifications under this segment have steady growth, many companies are known to invest in the naval segment in recent years, which will add to its fast growth.

According to the iff system market forecast, the IFF hardware segment had the largest market shares in 2018 due to various technological advancements in the field, such as enhanced radar technologies.

Based on the regional segmentation, the IFF System Market is divided into countries of the Asia-Pacific, Europe, North America, Latin America, the Middle East, and Africa. Also, as per the latest statistics, the Asia-Pacific is predicted to experience the highest CAGR of all other regions. It is due to the profitable increased investments in the military sector.

Based on the region-wise iff system market segment analysis, the Asia-Pacific region is predicted to experience a very high CAGR during the forecasted years. The main reason behind this substantial growth is the increased capital investments in the military sector of this region.

Apart from this data, China will also see a considerable increase in the IFF market shares and revenue in the coming forecasted years due to the huge investments in the iff system for military. Other regional segmentations that will witness normal to steady annual growth include North America, Latin America, Europe, Middle Eastern countries, and Africa.

As per the IFF System Market forecast, due to the rising needs and demands of the IFF system, many nations are extensively towards adding new technological innovations to these valuable detection systems.

The IFF System Market analysis is formulated using both primary and secondary research methods. The secondary research includes data collected from journals and annual reports, defense and aerospace magazines, and many others. The primary research includes sources like industry stakeholders, market trends, CEOs and directors, etc. This report is put together to understand the IFF System Market in detail and a quick outlook towards the current market performance at the global level.

This report includes a precisely formulated market overview, the impact of Covid-19 in the global IFF System Market, market dynamics like the market drivers, restraints, opportunities, challenges, and so much more. This report also showcases the market and regional segmentation, the key players and competitors of the market, and the latest developments.

The Middle East and Africa

Who are the vital influencers in the IFF system market in the future?

Which CAGR is projected to motivate the global IFF system market in the impending period?

Which region is spurring the IFF system market favorably in the forecast period?

The Asia Pacific region is estimated to increase a significant effect on the overall market in the forecast period.

Which income levels are foreseen in the IFF system market?

The market is estimated to gain a profitable income level in the forecast period.

Which reasons are predicted to inspire the IFF system market?

The uptick in the distribution of military aircrafts is estimated to prompt global market progress.