Hyper Car Market Research Report: Information by Propulsion (ICE Vehicle, Electric Vehicle and Hybrid Vehicle), by Application (Racing Competition, Entertainment and others) and by Region (North America, Europe, Asia-Pacific and the Rest of the World) - Forecast till 2030 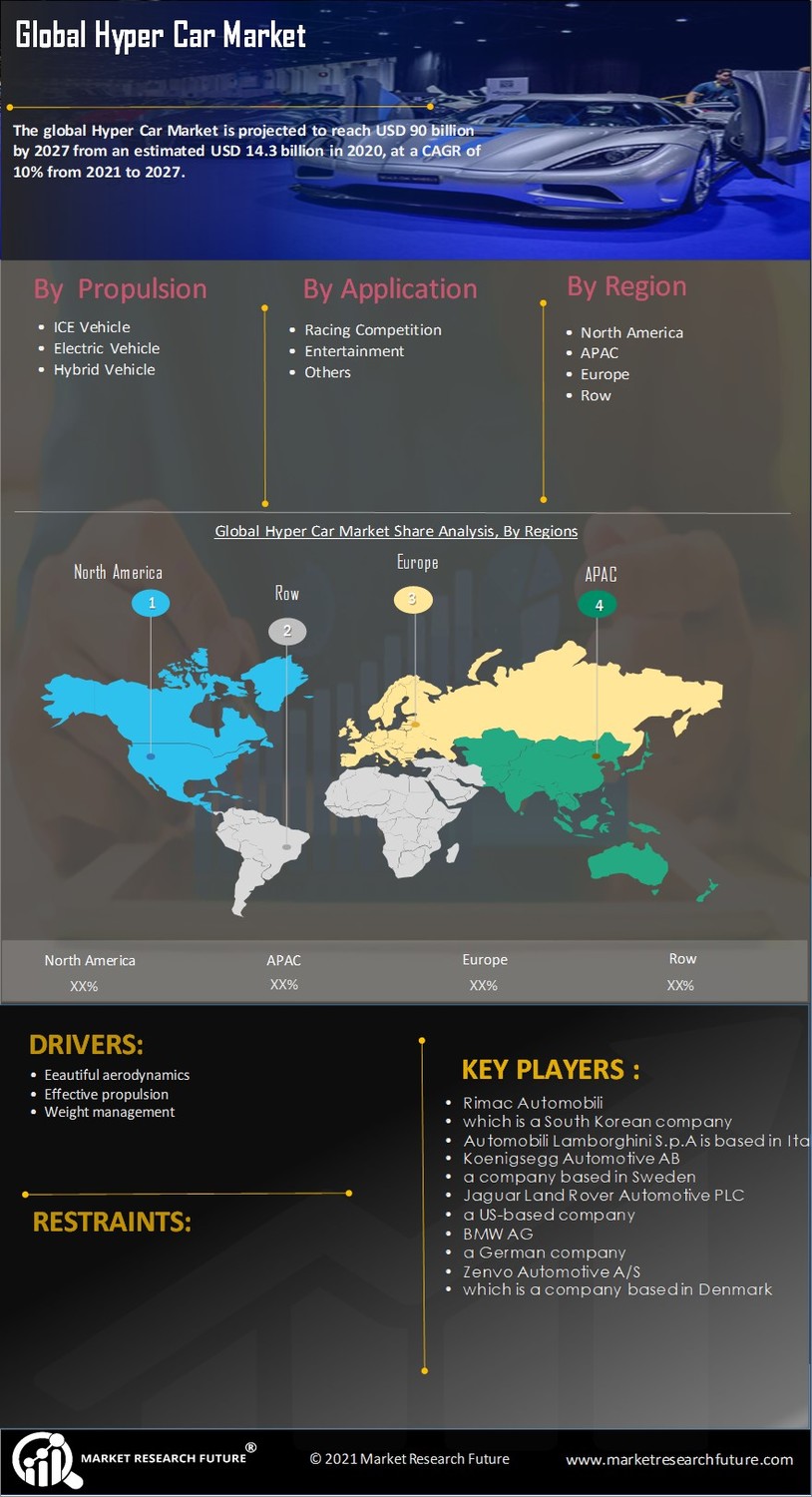 Hyper Cars are the highly efficient cares that provide safe and budget-friendly efficiency. It is also expected that the market Outlook will touch almost three to four times increase in the fuel economy, which will bring along the protection of the amenities and much more affordability. Apart from the beautiful aerodynamics, these cars have effective propulsion, and weight management has surpassed motorway speeds. Currently, there are only 1% of luxury cars. The automotive industry has been moving towards making ultra-lightweight cars that are creative and affordable, and this is the primary factor that would lead to the growth of the global hyper car industry Share.

There is nothing more heartbreaking than the fact that the pandemic has brought about a change in the lives of every living being on this planet. Business has been affected similarly. The corona period is something that no one would ever forget in this lifetime. Lockdowns quickly spread, and much more have affected the business to the extent that many of them have to be closed down due to high losses. But life has to move on, and there needs to be a way where they can restart from scratch, obviously with an experience this time or mend the already running business with proper guidance. The reports provided to them have all the necessary information that the companies would need to get back on track. Starting from the market Trends, current situation, to the competitor's status; everything has been provided in detail. All this is a result of the detailed study and analysis by the analysts. The reports have been prepared by the in-depth study of the market by the expert analysts who know where the market stands in the current scenario.

The hyper car market Growth is substantially going to increase by almost 1880 units during the year 2021-2025. Sideways, the CAGR of the market is also expected to be at 34.5%. The report provided on the market Revenue has the extensive research that has been done primarily. This is also accompanied by the analysis of the quantitative and the qualitative aspect in details. The analysts and the hyper car Industry experts are the ones who have prepared the in-depth analysis, which is beneficial for the companies. The reports also provide a clear picture of the market Revenue, which also has the history of the previous forecasts regarding the hyper car industry Analysis, size, volume and value. The technological advancements, governing factors of the market and macroeconomics have also been considered while preparing the reports. The discussion about the strategies followed by the top companies has also been included in the reports provided to all the organizations.

Various government bodies across the globe have laid down distinct regulations to the supercar market, which is one of the significant factors affecting the market Trends. A highly luxurious model was supposed to be launched by one of the primary critical players in the market, McLaren, in 2018. Still, due to strict regulations by the Australian design rules, it could not happen. Moreover, the prices of these hyper cars are something that needs a high budget. Hence everyone can't go with these. Subsequently, these cars lie in the luxury asset criteria. The industry is regularly working to make sure that the costs are reduced to be made available to everyone. The hyper car Industry 's paradigm shift has shifted towards developing and electrifying cars to minimize the harmful impacts on the environment and boost market Value. While the market is still waiting for the laws to be passed at different levels in different regions that can help it nurture, all that can be wished is that they get into place really soon.

The hyper car market is subdivided into two major segments

Based on propulsion: This is further categorized into the following:

Base on application: This segment is further divided into:

Based on the regions, the market is divided into following

The region that is expected to dominate the hyper car market Size is Europe. The primary reasons behind the growth are the increased investments in development and research areas to manufacture high-quality hyper cars. Also, there has been a substantial increase in the demand for luxury cars.

With a high CAGR of 34.5% over the forecast period, the global hyper car market Share is experiencing a high and significant growth. The growth is mainly due to the increase in the demand for comfortable and sophisticated vehicles. These cars are incredibly light in weight and are powered by an all-wheel system if driving. These also offer ample car horsepower combined with a scheme called turbocharging that helps the cars achieve high speeds. Also, the racing experience's preference has been increasing in the young generation, which is also another reason for the growth of the market Outlook in the forecast period.  Hyper cars can also achieve high-level fuel economy, which is three to four times more than the others. Improve efficiency, safe amenities, and affordability is what the manufacturers are looking at currently in the hyper car industry Analysis. The automotive industry is aiming at designing and producing the vehicle that is ultra-light in weight.

What are the segments, on the basis of propulsion?

Electric vehicles, ICE vehicle, as well as hybrid vehicle are the types of propulsion in the market.

among which regions is the market expected to show strong growth?

North America, Europe, Asia-Pacific, and the rest of the world are the regions where the market can note strong growth in the future

Name the regions where the market is expecting growth?

The areas which are expecting growth include Europe, North America, Asia Pacific and the rear of the work.

What is the difference between a supercar and hypercar?

The big supercar/hypercar differences are design, performance, and rarity — a supercar is a world-class vehicle, but a hypercar pushes the boundaries of the possible while generally being produced in more limited quantities.

Hyper Car Market to Demonstrate a Healthy Growth Over 2030