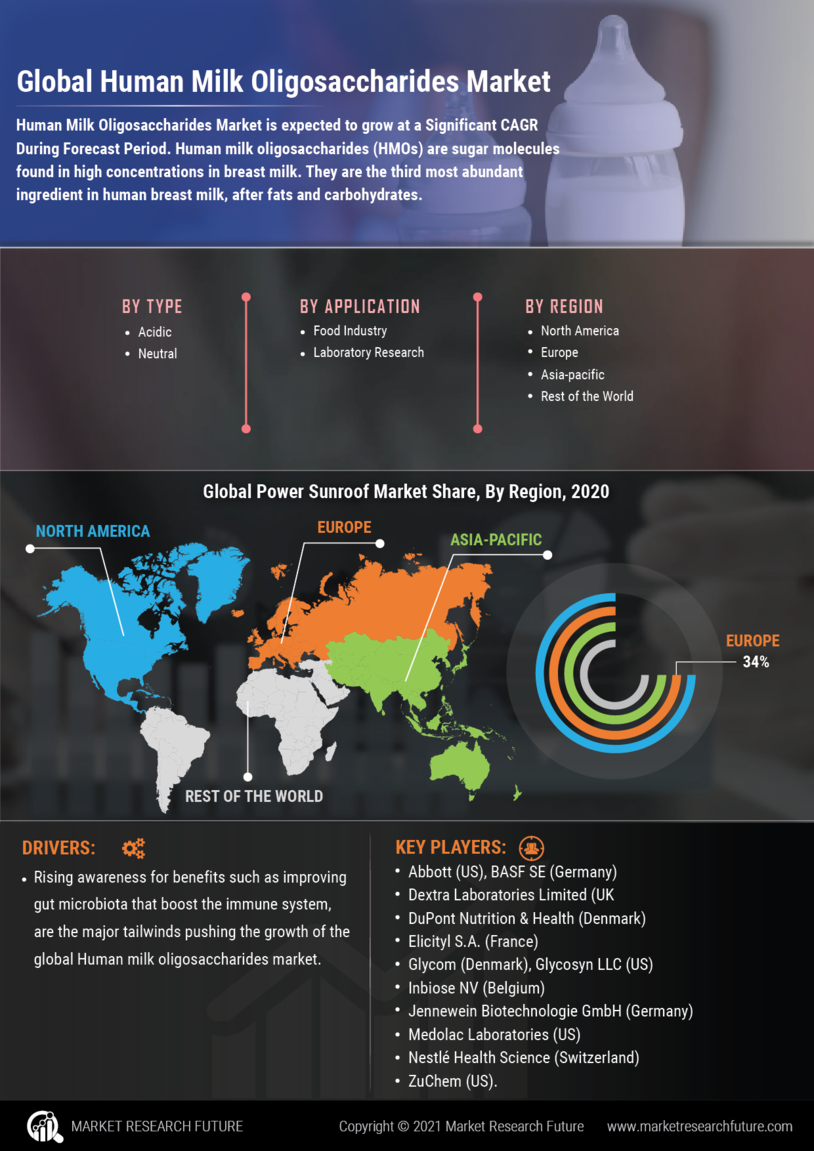 Growing health awareness has resulted in significant changes in behavior and nutrition over the last several years, increasing the supply of food supplements like nutritional supplements and probiotics throughout the world. Growing evidence supports the use of HMOs in grownup nutrition products such as functional meals and supplementation because of their advantages such as enhancing gut flora and strengthening the defensive system. Aside from encouraging the development of healthy microbes in functional food items and drinks, HMOs have been shown to reduce the presence of dangerous germs like salmonella and campylobacter in drinks and snacks. During the projected period, it is anticipated that these factors would contribute to the market's expansion.

This report contains all the information on the global human milk oligosaccharides market analysis and its strengths. The report also contains the culmination of dynamics, segmentation, key players, regional analysis, and other important factors. And a detailed analysis of the global human milk oligosaccharides market forecast for 2030 is also included in the report.

COVID-19 outbreak has a substantial influence here on the Human Milk Oligosaccharides market, according to industry analysts. When the lockdown was implemented, there was a rise in desire for HMOs as a result of panic purchasing for at-home usage during the early period of the epidemic. As a consequence, sales of HMOs increased significantly during the outbreak, owing to the idea that it works like an immunization booster.


Market growth will be driven by expanded applications in baby formula, trailed by expanded applications in nutritional supplements, during the projected timeframe. The many health advantages provided by HMOs are also a driving force in the industry. The consolidated prebiotic, antibacterial, and antiadhesive impacts of HMOs make a contribution to trying to shape the newborn gut microbiome early childhood, minimizing the chances of severe illnesses and also the danger of non-conditions such as respiratory problems and allergy symptoms.


The absence of technologies for large-scale manufacturing, the massive price of research and development, and the rigorous federal regulations are all expected to limit the expansion of the HMO industry. Baby formula is the most common application sector for the goods, which helps to improve health and avoid illness in newborns by providing them with nutrients. Furthermore, they play an important function in the evolution of the individual brain as well as the increase of recollection in individuals.


It is possible that the high prices connected with the goods would hinder market expansion throughout the projection period.

Human milk oligosaccharides seem to be the most important elements of human milk, and they may be found in a variety of formulations and quantities. HMOs are considered new foods or substances the essential for appropriate, and their safety must be evaluated. As in the United States, HMOs designed used in foods apart from nutritional supplements have been authorized under the GRAS (Generally Recognized as Safe) Act. CARE4UTM by DuPont has been authorized as GRAS in the United States for use in baby formula and child meals. With the rising desire for HMOs, 2 HMOs went through a new food quality assessment process in Europe in 2021, both of which had a good assessment result and were approved by European Commission in the year 2022.

Based on the application, the market is segmented into the food industry and laboratory research.

Based on the propulsion types, the market is segmented into neutral and acidic.

According to a UNICEF study issued in the year 2021, the United Kingdom is among the cheapest levels of breastfed in the globe, with only 34 percent of newborns getting breast milk by the time they hit the age of 6 months. As a result, the low prices of breastfeeding and the increasing number of EU certifications for newly released HMO-based treatments are the most important variables impacting the expansion of the European marketplace. Because of the fall in the newborn count, Japan had the lowest proportion of the worldwide human milk oligosaccharides marketin the year 2021. The Japanese market represented 3.26 percent of the global market in the year 2021.

Developments, innovative products, agreements, and acquisitions were among the primary tactics used by the companies functioning in the worldwide human milk oligosaccharides supplement market.

At what CAGR is the global human milk oligosaccharides market projected to grow in the forecast period (2022-2030)?

Human milk oligosaccharides market is projected to grow at approximately 14.4% CAGR during the assessment period (2022-2030).

How much is the global human milk oligosaccharides market worth in the future?

Human milk oligosaccharides market is estimated to reach a valuation of approx. USD 332.4 Million by the end of 2030.

Who are the top players in the global human milk oligosaccharides market?

Which region holds the largest share in the global human milk oligosaccharides market?

What are the major tailwinds pushing the growth of the global human milk oligosaccharides market?

Rising awareness for benefits such as improving gut microbiota that boost the immune system, are the major tailwinds pushing the growth of the global Human milk oligosaccharides market.

Human Milk Oligosaccharides Market Share is Estimated to Grow at a 14.4% CAGR During Forecast Per...