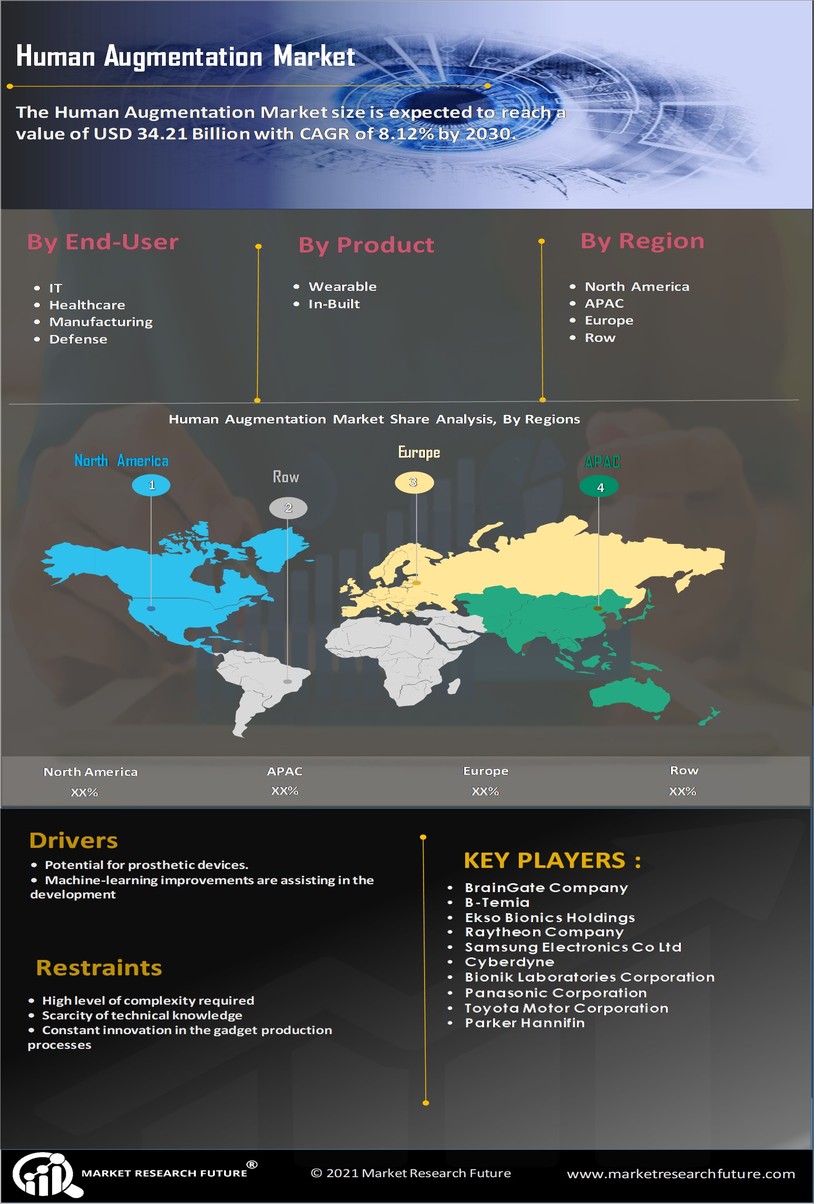 Human augmentation market size is expected to reach a value of USD 34.21 Billion by the end of the year 2030
Request a Free Sample

Human Augmentation Market Overview:According to the reports, the human augmentation market size is expected to reach a value of USD 34.21 Billion by the end of the year 2030, expanding at a compound annual growth rate of CAGR of 8.12% during the forecast period. Human augmentation is a term that refers to procedures that improve human ability by integrating biology, technology, and mechanical, and using either naturally or artificially means. Human augmentation has made considerable strides in recent years, with the majority of its applications occurring in the medical, army & defense, and industrial sectors.

Human Augmentation Market Covid 19 Analysis:The COVID-19 epidemic had a significant impact on the human augmentation business, causing many device manufacturing facilities to decrease their output and closed down for an extended period of time. In response to the disruption created by the pandemic, a number of major channel partners and technology companies were forced to reduce costs and manufacturing in some sectors. Industrial and technological changes that were emerging posed new difficulties to the building industry. As a result, industry participants began to work on defenses and solutions to reduce the effect on a large scale.

Nevertheless, the human augmentation market growth is progressively returning to normalcy, and as a result, revenues are also steadily increasing as well. An increasing number of nations are using artificial intelligence-enabled apps to offer more accessible gadgets in order to optimize the fundamental benefits of human augmentation technology.

Market Dynamic:Drivers:The industry for human enhancement seems to be on the verge of a boom, with many possibilities to be discovered. Research activities in the areas of biotechnology, automation, and medical equipment are being carried out in large numbers at a number of different institutions. Also collaborating in these research efforts are significant technology companies like Panasonic, Fujitsu, and Samsung, which are all growing in importance.

Opportunities:Recent technological advancements in the area of electronics have resulted in innovation that is potential for prosthetic devices. It is anticipated that the creation of a bionic tactile-perception technology with combined stimuli sensing and neuron-like knowledge capabilities in a low-pressure environment would provide enormous commercial human augmentation market opportunities. Moreover, pioneering efforts and significant investments are done by major market participants in the creation of skeletons and prosthetics are anticipated to propel the human augmentation market size to new heights in the coming years.

In addition to real-time translation software, another popular emerging technology that is expected to revolutionize the way people interact is voice recognition. Machine-learning improvements are assisting in the development of automatic translation accuracy and efficiency. The market will expand as a result of the research being done to improve accuracy and accuracy in real-time translation, as well as advancements in ai and machine learning.

Restraints:The human enhancement industry is experiencing severe setbacks, regardless of the fact that it has tremendous potential. The high level of complexity required in human augmentation production is expected to limit the market's expansion.

Challenges:The scarcity of technical knowledge, as well as the need for constant innovation in the gadget production processes, are significant obstacles.

Cumulative Growth Analysis:A solid foundation of technologically sophisticated manufacturing sectors underpins Japan's manufacturing sector, creating a major potential for the country's sector electronic industry. Along with this, the country's large mobile customer base and rapidly growing population are both contributing to the country's rapid development in the APAC market. The human augmentation market outlook in India is being driven by a number of reasons, including increasing use of smart gadgets, availability of low-wage labor, increasing disposable income, and also the country's recovery from the global financial crisis.

The end-user sector is further subdivided into the following categories: healthcare, military, information technology, production, and others. The healthcare sector, which accounts for the biggest share of the market and is expected to maintain its dominance during the forecast timeframe, is the most significant of these. The military industry, but on the other hand, is projected to expand at a compound annual growth rate of CAGR of 298 percent over the evaluation period.

Human Augmentation Market Segmentation Overview:The market is segmented on the basis of product, end-user, and geographic location. The global Human Augmentation market trend is expected to witness decent growth during the forecast period.

By Application:Based on the application, the market is segmented into portable augmentation and in-built augmentation.

By end-users:Based on the propulsion types, the market is segmented into healthcare, military, information technology, production, and others.

Human Augmentation Market Regional Analysis:According to the reports, the human augmentation market is segmented into four regions: the Americas, South America, Europe, Asia Pacific, and the rest of the world. North America has the greatest market share of all of them, followed by Europe and the Asia Pacific area, in that order of importance. North America is the most important participant in the worldwide market for human enhancement. The fast development of artificial intelligence technologies, as well as advances in gene-editing technologies, are driving the rise of the human augmentation industry. Aside from that, the existence of many significant companies such as BrainGate Company, B-Temia Inc., and Ekso Bionics Holdings, Inc., has an effect on the market size for human augmentation technology. The United States is the world's largest market for human augmentation technology, and it is anticipated to continue to expand at a rapid pace in the coming years.

Europe is the second-largest market for human enhancement in the world, behind the United States. During the projected period, the area is expected to develop at the highest pace in the world. Technological advancements and the increasing need for program performance measurement platforms across several business verticals in this area are factors that support the growth of the human augmentation market demand.

Human Augmentation Market Competitive Landscape:Due to the obvious significant existence of well-established market competitors, the industry seems to be highly competitive. As a means of gaining traction, they look for chances to integrate throughout the entire value chain while concentrating on R&D expenditures, manufacturing facility development, and mergers and acquisitions. With high margins, new competitors join the market with the goal of undercutting the incumbent suppliers and gaining a presence in foreign marketplaces.

Recent Developments:27th of January, 2021 – Aetna, one of the biggest health insurers in the United States, has announced that it is extending its cover of gender-affirming procedures to also include breast augmentation for transgendered people. In November, the insurer Manulife Financial Corp. stated that its transgender workers in the United States and Canada would be qualified for certain treatments and operations, including breast augmentation, under certain conditions.

What has been the historic valuation of the market?

The historic valuation of the market was valued over USD 588 million in 2017.

What is the futuristic valuation of the market included in the study?

What are the key regions mentioned in the study of the market?

Europe, Asia Pacific, North America, and the Rest of the World are the key regions mentioned in the regional analysis of the market.

Who are the key competitors of the market mentioned in the study?

Which region will be projecting to occupy the largest market share in the market?

North America will be projecting to hold the largest market share in the market.

Human Augmentation Market to Witness and Astounding 30% CAGR by 2023