A high-performance alloy is a mixture of high-end metals that exhibits several significant characteristics in various complex processes and operations. The primary features defining the high performance of such metals are resistance to thermal creep deformation, excellent mechanical strength and surface stability, and greater resistance to corrosion or oxidation.  The important alloying elements include nearly 2.0% manganese and small quantities of various metals such as nickel, copper, niobium, nitrogen, chromium, molybdenum, vanadium, calcium, rare earth elements, titanium, and zirconium. Of these, copper, niobium, vanadium, and titanium are added to provide strength. Some of the important alloys are Inconel, Hastelloy, Rene alloys, Waspaloy, MP98T, TMS alloys, Incoloy, and CMSX single crystal alloys. The development of such alloys is heavily reliant on chemical process innovations. Various chemical treatments such as solid solution strengthening confer high temperature strength to an alloy. In addition, one of the substantial strengthening mechanisms is the precipitation method which includes secondary precipitates such as gamma prime and carbides. Important metals such as aluminum and chromium provide oxidation or corrosion resistance along with strength. High performance alloys are used in almost all major end-use industries such as machinery, tools, turbine engines, and mechanical equipment. Moreover, the aerospace and defense and marine industries are major consumers of high performance alloys as they provide better mechanical properties or greater resistance to corrosion than carbon steel. 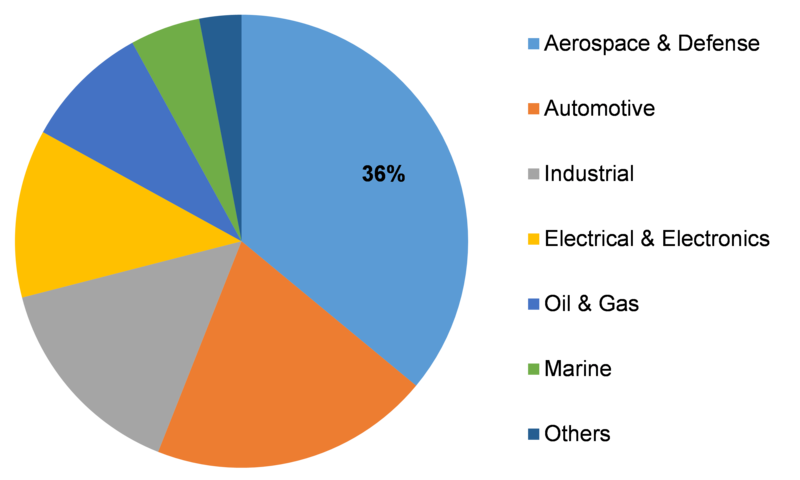 The global high performance alloys market has been segmented on the basis of metal type, product, end-use Industry, and region.

On the basis of metal type, the market has been segmented into iron, aluminum, titanium, magnesium, and others.

Based on product, the market has been segmented into non-ferrous, refractory, superalloys, and others.

By end-use industry, the market has been segmented into aerospace and defense, automotive, industrial, electrical and electronics, oil and gas, marine, and others.

The market has also been studied with regard to five key regions—Asia-Pacific, North America, Europe, Latin America, and the Middle East and Africa.

What is the expected valuation of the global high performance alloys market?

The global high performance alloys market can surpass a valuation of UDS 50 billion by 2023.

The growth of the aerospace & defense industry is the primary driver of the global high performance alloys market.

What are the restraining factors of the global high performance alloys market?

Complex production processes and need for large-scale investments are major factors which can impede the growth of the global high performance alloys market.

Which region can dominate the global high performance alloys market?

The APAC region is presumed to dominate the global high performance alloys market till 2027 due to presence of end-use industries of electronics, electrical, and automotive.

Who are the key players of the global high performance alloys market?

High Performance Alloys Market Is Projected To Grow At A High Cagr On Account Of The Growing Dema...