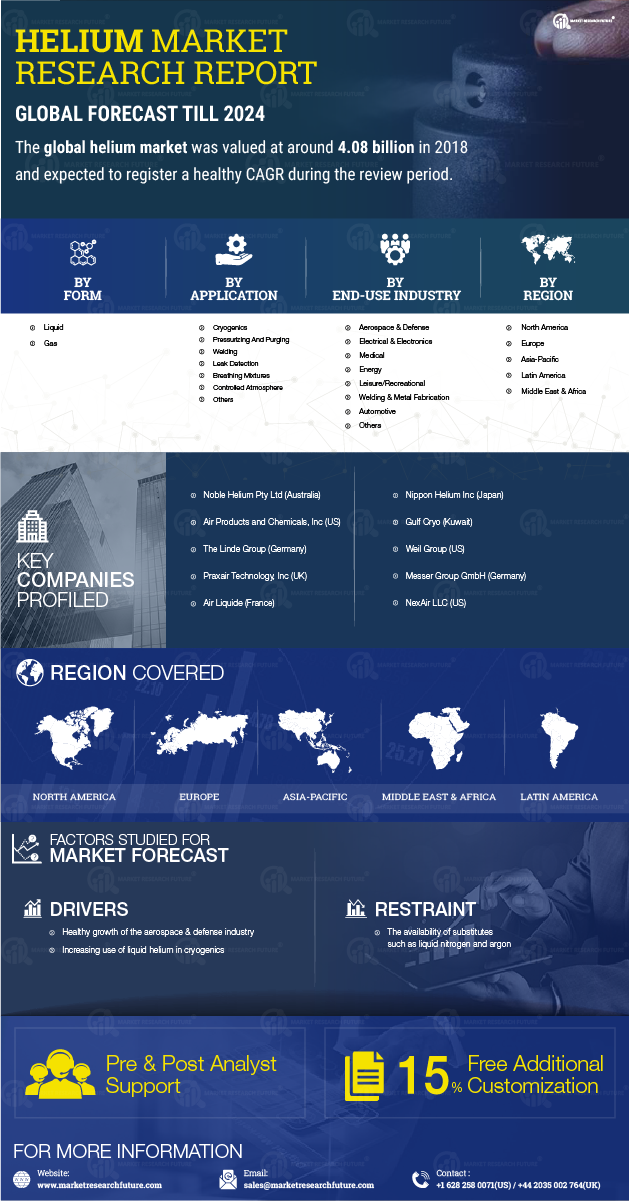 However, helium is primarily used as a byproduct at various gas and conventional projects. Therefore, the increasing demand for gas and oil caused a reduction in helium production. But, gradually, the need for the production of pure helium is increasing. Subsequently, the Helium Industry will grow in the upcoming years.

The aerospace industry suffered a significant decline due to the outbreak of coronavirus disease. Due to this, the Helium Industry faced a substantial drawback due to the lockdown in several countries. However, it is expected that the market will regain its growth with the lowering of the cases of COVID-19.

The rising use of liquid helium in MRI scanners and cryogenics will drive market growth. Also, the rapid expansion of the medical industry and the development of medical infrastructure in several countries will further boost the Helium Market Growth.

It is anticipated that the use of helium substitutes such as argon and liquid nitrogen will act as a restraint for the Helium Market Growth.

Helium is used for various purposes such as welding, fibre optic, leak detection, MRI scanners, NMR, and many more. Also, It has wide usage in the defence and aerospace industry. Therefore, the Helium Market will have vast opportunities in the future years.

The low availability of a robust supply chain can be challenging for market growth.

The Compound Annual Growth Rate (CAGR) global Helium Market is projected to grow at 5.30% in the studied forecast period. Also, in 2020 was valued at USD 4462.19 Million. It is expected that the value will further increase up to USD 31.30 Million by the studied forecast period 2022-2030. The potential drivers such as demand in the aerospace industries and boost by prominent key players are expected to propel the Helium Market Revenue.

The betterment of medical facilities will eventually enhance market growth. Also, the increasing demand in various industries will be favourable for the market. Also, India, China and other Asian countries will further enhance the value chain of the Helium Market.

The global Helium Market is divided into different segments such as end-use, application, form, and region. Based on end-use, the market is divided into Recreational/Leisure, Medical, Automotive, Electronics and Electrical, Defense and Aerospace, Energy, Metal and Welding Fabrication, and Others.

On the basis of form, the Helium Market is segmented into Gas and Liquid.

On the basis of region, the Helium Market is divided into Europe, Africa and the Middle East, Latin America, Asia-Pacific, and North America.

The Helium Market Size is divided into Latin America, Asia-Pacific, Europe, North America, Africa and the Middle East. It is estimated that North America will have the highest Helium Market Share. The aerospace and the defence industry of the US helped generate USD 865 Billion Helium Market Revenue. Also, the growth of the healthcare industry and technological advancements will further improve the market growth.

Also, the Asia-Pacific region will experience the fastest growth in the studied forecast period. The presence of end-use industries, electronics and electrical, medical, automotive, etc., will promote market growth. Countries such as China and India will increase the demand for helium. Recently in 2017, China approximately allocated USD 150.2 Billion to purchase helium for its defense industry.

Europe is also anticipated to improve its position with a healthy Helium Market analysis in the forecast period. Due to the rising demand for the latest technology products at low costs and metal-fabricated products, the region will improve its growth significantly.

Also, Africa and the Middle East region will proliferate. The presence of several key players and end-use industries will further boost market growth. Hence, the rapid development of end-use industries such as medical electronics and electrical and aerospace will positively influence the market.


November 2021: First Helium Inc., a helium exploration corporation with major development opportunities across western Canada, announced that its technical team has completed its assessment of approximately 880,000 acres of prospective helium lands in Southern Alberta (Canada) and has taken the initiative over 276,000 acres of land, which includes over 176,000 acres of corresponding 3D seismic and 512 kilometers of 2D seismic for another two years.November 2021: First Helium Inc., a helium exploration company with considerable development possibilities across western Canada, stated that two separate transactions with private, third-party entities to buy an aggregate of 40 kilometers of natural gas collection pipeline assets have completed.November 2021: Helium explorer Helium One started work on its Rukwa Project in Tanzania's Phase 2 exploration program. Around 200 line kilometers of 2D seismic will be used in the Phase 2 2D Seismic Campaign to target northern extensions of structure highs that serve as helium charge focus. The Tai well site so far yielded some promising structures, including high-quality seal and reservoir units. Helium One also discovered charge focus and trapping geometries far beyond known surface steeps. In Tai-1A, the company discovered a possible pocket of helium gas trapped within reservoir units below a 130m sealing claystone unit.

The report overview of the Industry is as follows.

The report score provides valuable information about the Helium Industry. It covers essential information such as CAGR, restraints, key players, and many more. However, the information in this report is gathered from several secondary and primary sources.

What is the anticipated growth rate of the global Helium Market in the studied forecast period?

The global Helium Market is anticipated to grow at a robust CAGR of 5.30% in the studied forecast period.

What is the estimated Helium Market Value expected to touch in the forecast period?

What are the market segments of the Helium Market?

What are the essential drivers pushing the Helium Market Growth in the studied forecast period?

The rising demand for helium in welding, MRI, cryogenics, and various items is fuelling the market growth. Also, the increasing support to use helium in defence, automation, and aerospace will further drive the Helium Market.

Which region is anticipated to hold the largest share in the Helium Market?

The Helium Market on the basis of region is segmented into Latin America, Europe, North America, Africa and the Middle East, and Asia-Pacific. North America is evaluated to improve at robust CAGR. The US defence and aerospace is recorded at Helium Market Revenue of USD 865 Billion. Hence, it will have the largest share. Secondly, the Asia-Pacific region is expected to grow at the fastest CAGR in the forecast period of 2022-2030. Similarly, Europe will also hold growth at a substantial rate due to the growing development in the medical industry. Also, Africa and the Middle East region will grow at prominent CAGR due to the presence of several key players.

Name the essential players of the Helium Market.