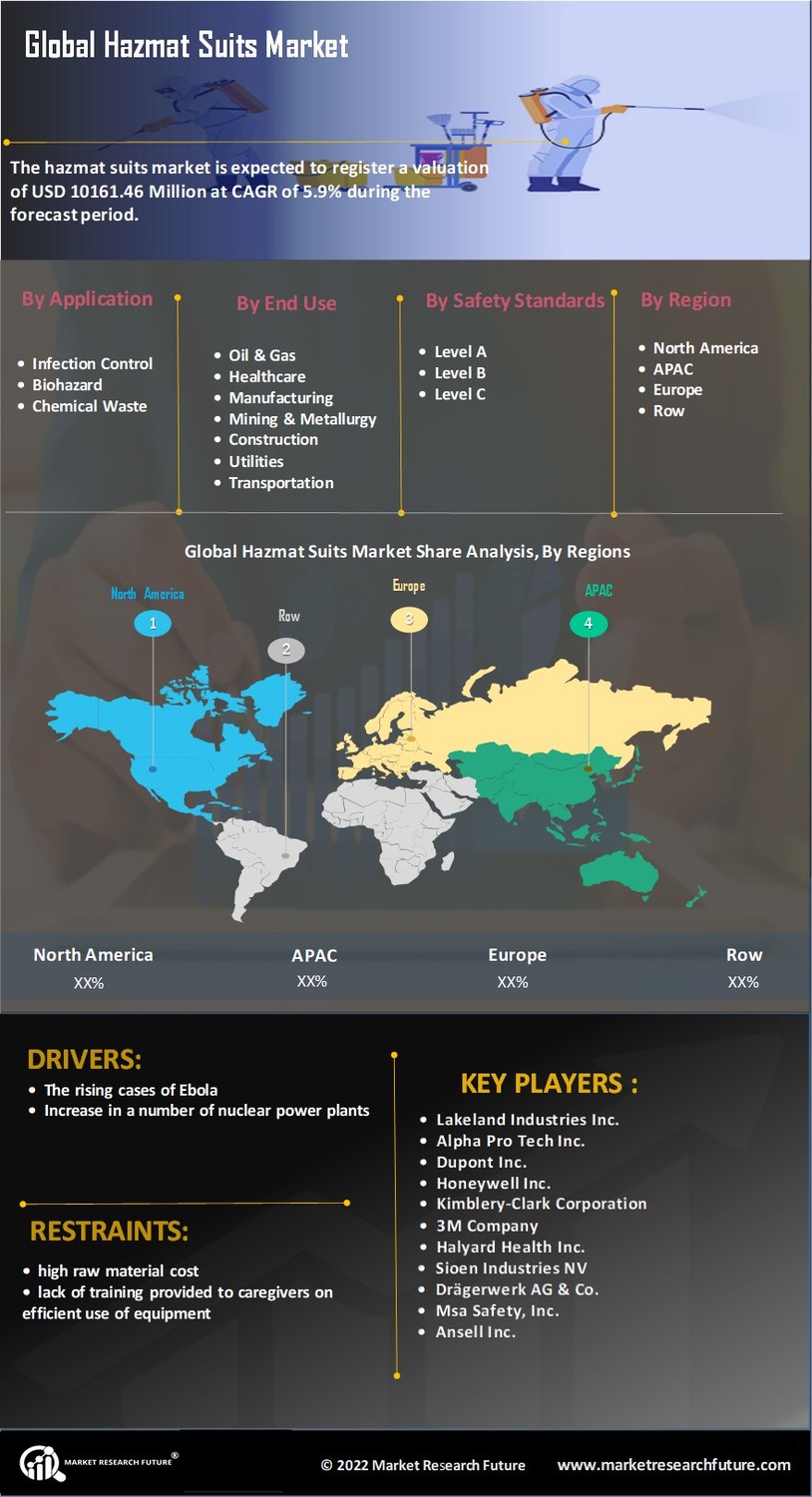 The rising cases of Ebola is one of the key factors driving the hazmat suits market. According to the Centers for Disease Control and Prevention in 2018, the Ebola virus disease case fatality rate was 61% and the reported a number of cases were 54 in the Democratic Republic of the Congo.

Various other factors such as the increase in a number of nuclear power plants across the globe and rise in work safety are also expected to propel the growth of the market.

However, high raw material cost and lack of training provided to caregivers on efficient use of equipment can hamper market growth over the forecast period.

The Hazmat Suits Market is segmented based on application, end use, safety standards, and region.

The global market for hazmat suits, by application, has been segmented into infection control & biohazard, chemical waste, haz-mat, and others.

Based on end use, the market has been divided into oil & gas, healthcare, manufacturing, mining & metallurgy, construction, utilities, transportation, and others.

Based on the safety standards, the market has been segregated into level A, level B, level C, and others.

In the current scope of the study, the segments mentioned above are covered into the four global regions, namely, the Americas, Europe, Asia-Pacific, and the Middle East & Africa.

The hazmat suits market in the Americas has further been segmented into North America and South America, with the North American market divided into the US and Canada.

The Americas dominated the global market for hazmat suits owing to the increase in the number of nuclear plants, and growth in the number of pharmaceutical and biotechnological industries. According to the World Nuclear Association, the US is the world's largest producer of nuclear power, accounting for more than 30% of worldwide nuclear generation of electricity. Moreover, according to the US Energy Information Administration, as of June 18, 2019, there are 59 commercially operating nuclear power plants with 97 nuclear reactors in 29 of the US states. Additionally, increasing initiatives taken by the US-based manufacturers to develop effective chemical protective suits. For instance, DuPont has introduced ProShield FR, which has been designed as a disposable suit that helps protect primary flame-resistant clothing worn underneath.

In 2018, it was estimated that Europe stood second in the Hazmat Suits Market. Increasing safety awareness among people and strict government guidelines are driving the growth of the market in European region. Germany commanded the largest share in the European market for hazmat suits due to the increasing need for protection against both the chemical and biological hazardous waste materials.

Asia-Pacific (APAC) is expected to represent the fastest growth in hazmat suits throughout the forecast period due to an increase in the end use applications of hazmat suits and an increase in the economic activities in this region. Countries in Asia-Pacific are adopting advanced waste management practices; this in turn fuels the market growth in this region. Moreover, China is a hub for the manufacturing companies of Level C and D type of hazmat suits. This is expected to have a positive impact on market growth.

On the other hand, the Middle East & Africa holds the least share in the Hazmat Suits Market due to the low economic development, especially within the African region.

The Market of Hazmat Suits, by Application

The Market of Hazmat Suits, by End Use

The Market of Hazmat Suits, by Safety Standards

The growing awareness about workplace safety is the major driver for the market.

Asia Pacific is the largest regional market for hazmat suits due to the growing industrial sector in the region.

Leading players in the market include Lakeland Industries, Alpha Pro Tech, and DuPont, among others.

The Rising Need for Protection Against both the Chemical and Biological Hazardous Waste Materials...