Artificial lift global market has been segmented on the basis of type, mechanism, application, and region.

Based on type, the market is classified into rod lift, ESP, PCP, gas lift, and others. Others include plunger lift and hydraulic pumping. Among these, rod lift segment is expected to dominate the market as it can be used for wide range of operating conditions and production rates. Also, it is easy to operate, and it find application majorly in inclined, deep, and horizontal wells.

Based on mechanism, the market is segmented into pump assisted and gas assisted. Pump assisted is estimated to hold the largest share owing to major deployment of rod lift, ESP, and PCP pumping systems.

The key players of global artificial lift market are Halliburton (US), Schlumberger (US), Weatherford (US), GE Oil & Gas (US), National Oilwell Varco, Inc. (US), Borets International Limited (UAE), Dover Corporation (US), Flotek Industries, Inc. (US), JJ Tech (US), John Crane Group (US), and AccessESP (US), and OILSERV (UAE), among others. 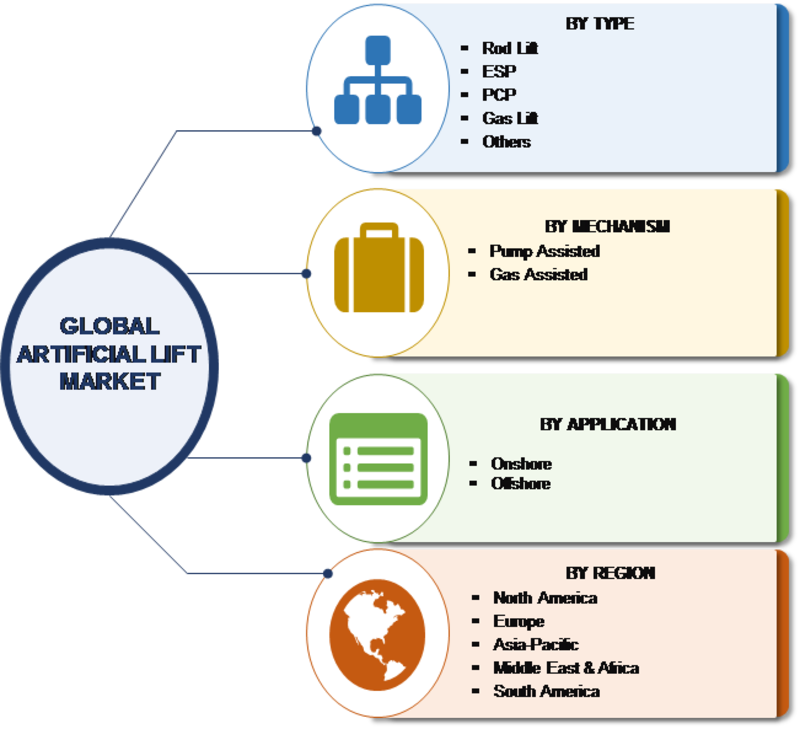 Artificial Lift is a method which is used on oil wells to increase pressure within the reservoir in order to increase flow of liquids such as crude oil or water. Some reservoirs do not flow naturally. Hence, artificial lift methods are employed to lift the oil to the surface. These methods can be deployed on both mature and new wells to maximize and maintain production from well. For instance, in US, 96% of the wells require artificial lift from the beginning. The other advantages of artificial lift method include reduced maintenance and risk, boost life-of-well productivity, and increase ROI by balancing flow rates and lifting costs.

The two main type of artificial lift methods include pump assisted and gas assisted. Pump assisted methods mostly include rod lift, ESP, and PCP and gas assisted include gas lift and plunger lift. The key drivers of artificial lift market are rising shale gas production, increasing heavy oil production, and presence of large number of oil & gas reserves. U.S., China, Canada, and Argentina are the key countries involved in production of shale gas. US is the largest producer of shale gas and is expected to produce 80 billion cubic feet (bcf) of shale gas by 2040. The countries such as Canada, Venezuela, Saudi Arabia, U.S., Mexico, Brazil, Russia, and China are the active heavy oil producing countries. Large number of reservoirs are present especially in the Middle East & Africa region, thereby driving the market.

What are the key drivers of the market?

Which regions are growing faster with the market share?

Asia Pacific, North America, Europe, the Middle East & Africa, and South America are the regions that are growing faster with the market share

Which countries are active heavy oil producing countries across the world?

Which region to hold the largest share during the forecast period?

The market has recorded 5.63% CAGR of the market.

Artificial Lift Market Is Expected To Showcase Rampant Growth Over 2027