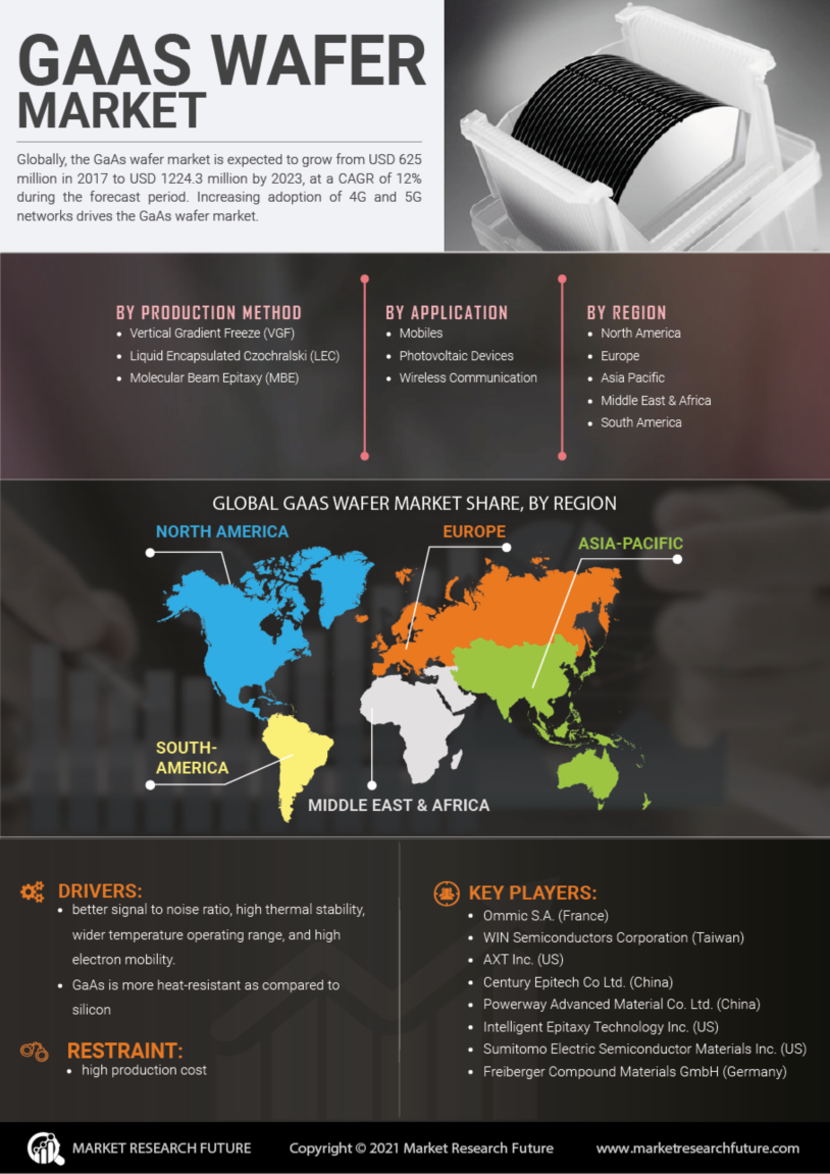 Globally, the GaAs wafer market is expected to grow from USD 625 million in 2017 to USD 1224.3 million by 2023, at a CAGR of 12% during the forecast period. Increasing adoption of 4G and 5G networks drives the GaAs wafer market. However, the high production cost is restraining the market growth.

Gallium Arsenide (GaAs) is a semiconductor compound of two elements gallium (Ga) and arsenic (As). Gallium is a product produced after smelting of aluminum and zinc. GaAs is used in various end-use applications such as solar cells, manufacturing of LEDs, laser diodes, and wireless communication. The GaAs is also used in Field Effect Transistors (FET) and integrated circuits (ICs). In this compound, the velocity of electrons is faster than silicon, which makes it ideal for high velocity and high electric field applications. GaAs is more heat-resistant as compared to silicon which makes it suitable for use in power amplifiers for transmitting high-speed signals.

By application, the market is segmented into mobile devices, photovoltaic devices, wireless communication, optoelectronic devices, aerospace & defense, and others.

By region, the GaAs Wafer Market is segmented into North America, Europe, Asia-Pacific and the rest of the world.

The global market for GaAs wafer is estimated to grow at a significant rate during the forecast period from 2018 to 2023. The geographical analysis of GaAs wafer market is studied for North America, Europe, Asia-Pacific, and the rest of the world.

MicroLink Devices has achieved a 37.75% power conversion efficiency from a three-junction epitaxial lift-off (ELO) thin-film solar cell. This device’s performance is certified by the US ‘National Renewable Energy Laboratory’ and tested under AM1.5G industry standard.

At what CAGR will the GaAs wafer market grow during the forecast period?

What valuation is the GaAs market predicted to reach during the forecast period?

Which region will dominate the GaAs market?

North America is predicted to dominate the GaAs market.

Which factors may limit the GaAs market growth?

Name the key players profiled in the GaAs market.