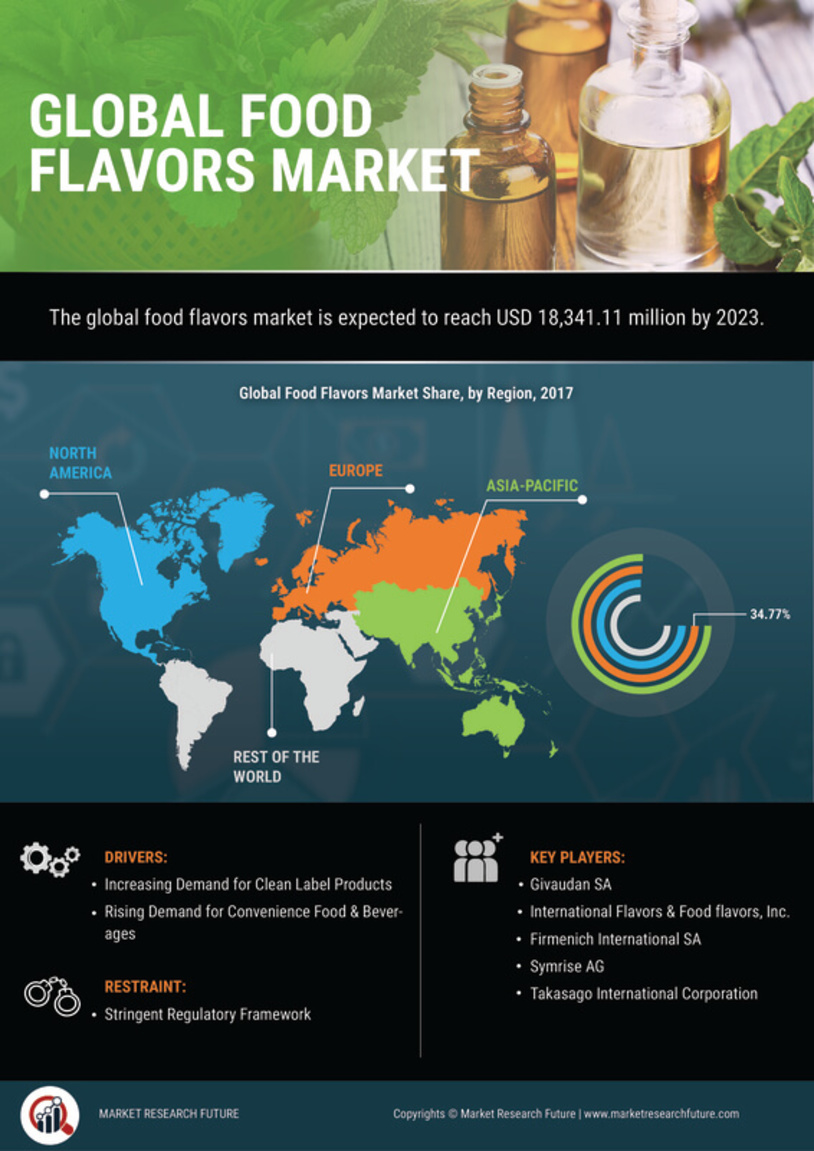 According to the market scenario, the food flavor market has been approximately making the growth of USD 18.51 billion by the forecast period. It has an expectation to register with a CAGR rate of 4.2% during the period, 2019-2024. Food flavors consist of the ingredients that include the additives used for adding flavors within the food and the beverages. Further, this process enhances the taste of the final products for better nourishment as well. It derives the basic significance along with the sources through which the process has been conducted. An increase in the demand for the food flavors across the various applications. In this situation, the rising health consciousness among the entire consumers that led to the increase in the increased sales for food flavors from the natural sources.

Apart from that, microencapsulation has a major technique and the food flavors to be across the globe and the low stability for the growth. Hence, the food flavors has the application tends to be within the bakery and the sweet & savory snacks and that majorly flavors the suppliers across the entire globe. This tends to the low stability with the better growth and the major technological aspect.

The outbreak of Covid 19 analysis and has an impact on the financial economy for the better understanding of the situation. In this case, the sales of the companies and the food flavor market has reduced the operation has been halted.  In this report, the elaboration is based upon the benefits of finance along with the food flavor market growth that attains the crisis. Thus, the development of the metabolism initiates the overall access of the world growth. The global analysis of the key manufacturers with an improved sensation of the business expectation with utmost precision. Hence, the convergence of the majority of the industry avails to be the better demand for the food flavor and management has increased currently.


The shift in the consumer base has been observed and it states that in the past few years on the various scales and that includes the connoisseurs, health awareness and the food choices. This mainly includes the meat or the vegan diet for the better demand of the wide portfolios of the flavors. Hence, to make a match with the consumer demand entails the constant strive in the R & D for achieving the innovation of the product portfolio.


The side effect of the added flavors includes both the synthetic and the natural ailments for betterment. In this section, the major health of the effects includes the artificial flavors and the natural flavors as well. Thus, several of the synthetic flavors includes the central nervous system with depression and the convulsions. Here forth, the synthetic flavors has made the amyl acetate and might cause indigestion, fatigue and the irritate mucus manages the membrane symphocally. Such the toxins happen to be harmful and it mainly includes the health hazards that cannot be treated properly. Therefore, the effects of the restrains happens the food flavor market growth and it eventually advices that certain toxins present the natural flavors to be extracted through plants and fruits.


One of the compliances has the efficiency of the quality with regulatory standards for various norms and standardization. In this situation, the regulatory standards have been mentioned by the country management and it regulates the common goal for better safety of the consumers. In this scenario, the regulations have been set up by the different countries and it mainly includes the emphasis on the better utility of the flavors. Here, the stringent regulations has been considered as both a delay and the prevent of the launch of the new products manages the increase for the better efficiency of the products induced and managed. Thus, the implementation of the new regulations along with the modifications states to be an existing regulation that negatively affects the growth of the global market.

The segmentation of the market overviews the importance of the segmented market and it initiates the importance of the application, region, source and others. Based on the application, the global market of the food flavors has been classified in the synthetic and natural. Further, based on application, the food flavor market has been divided as the bakery, confectionary and the dairy frozen material for the better enhancement of the sweet, savory and the snacks. This initiates the formulation of the global food flavors and has been studied under the regards of the key regions of North America, Asia-Pacific and the rest of the world.

In this market region analysis, Europe has expected to dominate the entire market for the food flavors during the forecast period. A strong presence and the key players within the region has innovation and in the natural food majorly drives the growth within. In this speculation, North America has projected and that holds the significant growth for the global flavor market and within the US hold of the major market share. This entails the growing demand for the organic and the clean label products has increased the demand for the natural food flavor.

Further, the Asia-Pacific has been projected and it registers the highest CAGR during the stated forecast period. The rapid growth of the food processes the industry that mainly includes China, Japan and India.

This report includes all the basic details and it also tends to initialize the growth along with the better efficiency of the companies with particular management. It states that all the driving factors have been interrupted due to the sudden covid 19 situations. The entire analysis is based upon the Covid 19 analysis, regional analysis, market overview, segmentation analysis, market dynamics and it mainly includes the challenges, opportunities, restraints, and drivers. Further, the competitive landscape and the other sections are been presented. Hence, all of the information, that has been collected is from the primary as well as the secondary sources.

What is the valuation of the food flavors market?

What is the CAGR of the food flavors market?

food flavors market is expected to exhibit a strong 4.2% CAGR over the forecast period from 2020 to 2027.

What is the major driver for the food flavors market?

The increasing demand for natural flavors is likely to be a major driver for the food flavors market.

What is the leading regional food flavors market?

Europe is likely to dominate the global food flavors market.

What are the leading players in the food flavors market?

Leading players in the food flavors market include Givaudan SA, International Flavors and Food Flavors, and Firmenich International, among others.