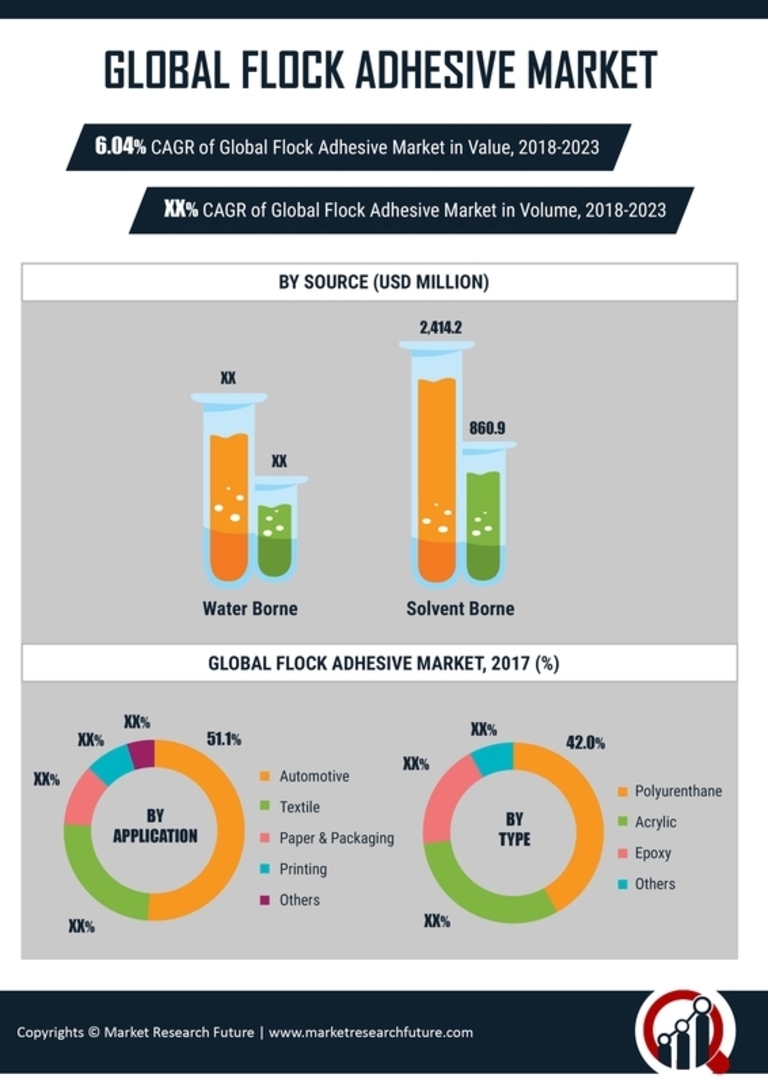 The Flock Adhesives Market in the global market is expected to grow at a high CAGR of 6.2% to account for the market value of about USD 3,275 million by the end of the forecasted period from 2017 to 2023.

A mass that has been pasted onto a substrate from a short fiber cut from the substance is termed a flock. It also helps in producing a faultless finish and smoothness in a substrate. It is attached electrostatically. In this substrate, millions of small strands are fibred for producing a uniform and aesthetically because of electric charge in vertical alignment. Flock adhesives provide a special feature according to the specific requirements for producing a homogeneous finish. Under the Flock Adhesives Market, thicker fibers are used in a brush-like surface, whereas thinner fibers are used in a softer surface. The use of fissure-free surfaces helps in improving efficiency in existing technologies.

The global pandemic of COVID 19 has affected the lives of all businesses in the most negative way it can. It has pushed the economies into forced recession as a battle has to be fought from the health front as well as the fiscal front. Owing to the lockdown situation and post lockdown situation, many businesses manufacturing and production units were shut down in the Flock Adhesives Market, because of which there was a downfall in the market revenues and profit margin.

The Flock Adhesives Market is expected to recover from this low revenue situation which was the result of a global pandemic at the end of the first quarter and beginning of the second quarter in the coming year.

The widespread use in the industrial sector has made the customizability and its widespread applicability of the Flock Adhesives Market in the global market. The Market has various applicability in different sectors like in uniform plain print in the wide range of substrates. This new technology technique is also used fulfilling the tailored requirements of the customers that produce a highly homogeneous finish. This Flock Adhesives Market is further expected to rise at great heights in the global market by the end of the augur period from 2017 to 2023.

The Flock Adhesives Market in the global market has been divided based on Type, Source, Application, and Region.

Based on the type:

The Flock Adhesives Market in the global market has been divided based on type into polyurethane type, acrylic type, epoxy type, and many other types.

Based on the source:

The Flock Adhesives Market in the global market has been divided based on source into solvent-borne adhesives and waterborne adhesives.

Based on the application:

Based on the region:

The Flock Adhesives Market in the global market has been divided based on the region into the Europe region, the North America region, Latin America region, Asia-Pacific region, and the Middle East and Africa region.

The Flock Adhesives Market in the global market has been divided based in the region into the North America region, the Europe region, Latin America region, Asia-Pacific region, Africa region, the Middle East, and the rest of the world. The largest share in the Flock Adhesives Market in the global market is held by the Asia-Pacific region as this is the fastest-growing region and shows a positive increase in demand during the augur period owing to the presence of various emerging countries like South Korea, India, Japan, and China.

The second-largest market share is held by the Europe region owing to increasing expenditure on infrastructure for enhancing the overall productivity of workers in an organization and also due to the presence of various competitive countries like Russia, Italy, Germany, and Spain. The next position is held by the North America region, followed by the Latin America region and the Africa region, and the Middle East, respectively.

The most prominent market players in the Flock Adhesives Market in the global market are as follows:

These prominent market players use various innovative strategies for developing the product at low cost along with increasing efficiency in the working of the organization for increasing the customer base in the potential market all across the globe in the Flock Adhesives Market during the estimated period.

What would be the valuation of the global flock adhesives market by the end of the year 2027?

The global flock adhesives market is set to grow commendably while achieving revenues worth USD 3,275 MN by the end of the forecasted period.

At what CAGR is the global flock adhesives market growth projected to accelerate during the forecast period (2020-2027)?

What ate the major growth drivers of the global flock adhesives market?

Widespread use in the industrial sector.

Which region holds the largest share in the global flock adhesives market?

Who are the top players in the global flock adhesives market?

Henkel AG & Co. KGaA, H.B. Fuller Co., Sika AG, DowDuPont, Inc. and Bostik are the manufacturing companies which collectively account for the majority share of the flock adhesive market. The market is concentrated in North America and Europe and comprises of market players which are operational in US, Germany, and Switzerland. Different strategies such as product launches, expansion, and sales and purchase agreement, collaborations are implemented by market players to expand their footprint and gain maximum revenue. There is a surging demand for the product from automotive and textile end-use industry which contributes to the growth of the market. There is intense competition between the market players in North America and Europe.

In July 2017, Techsil Ltd. announced a distribution agreement with Henkel. This agreement will strengthen both the companies and can increase its product portfolio by offering wider range of structural adhesive products. In March 2016, Asian Paints signed a distribution agreement with Germany’s Henkel Adhesive Technologies. Henkel’s adhesive brand Loctite will be sold through a co-branding initiative at the retail level. Asian Paints have a strong distribution network with 36,000 harware shops whill will help Henkel to spread in western India.

In September 2017, H.B. Fuller Company entered into a purchase agreement with Royal Adhesives & Sealants, a leading manufacturer of high-value specialty adhesives and sealants. This agreement will consistently deliver industry-leading growth rates,free cash flow, EBITDA margins, that are anticipated to improve H.B. Fuller’s position as a global leader in the adhesives industry.

In September 2016, Sika Automotive commissioned a new factory in Brazil and started manufacturing adhesives and a wide range of acoustic products for the automotive market in Latin America.

In July 2015, Arkema expanded Bostiks’s hot melt pressure sensitive adhesives (HMPSA) production capabilities in Bangalore, India. This expansion will aid in serving many customers, but in particular the disposable hygiene sector. Their adhesives are largely in demand for more challenging applications like wetness indicators, elastic attachments, and products that stretch.