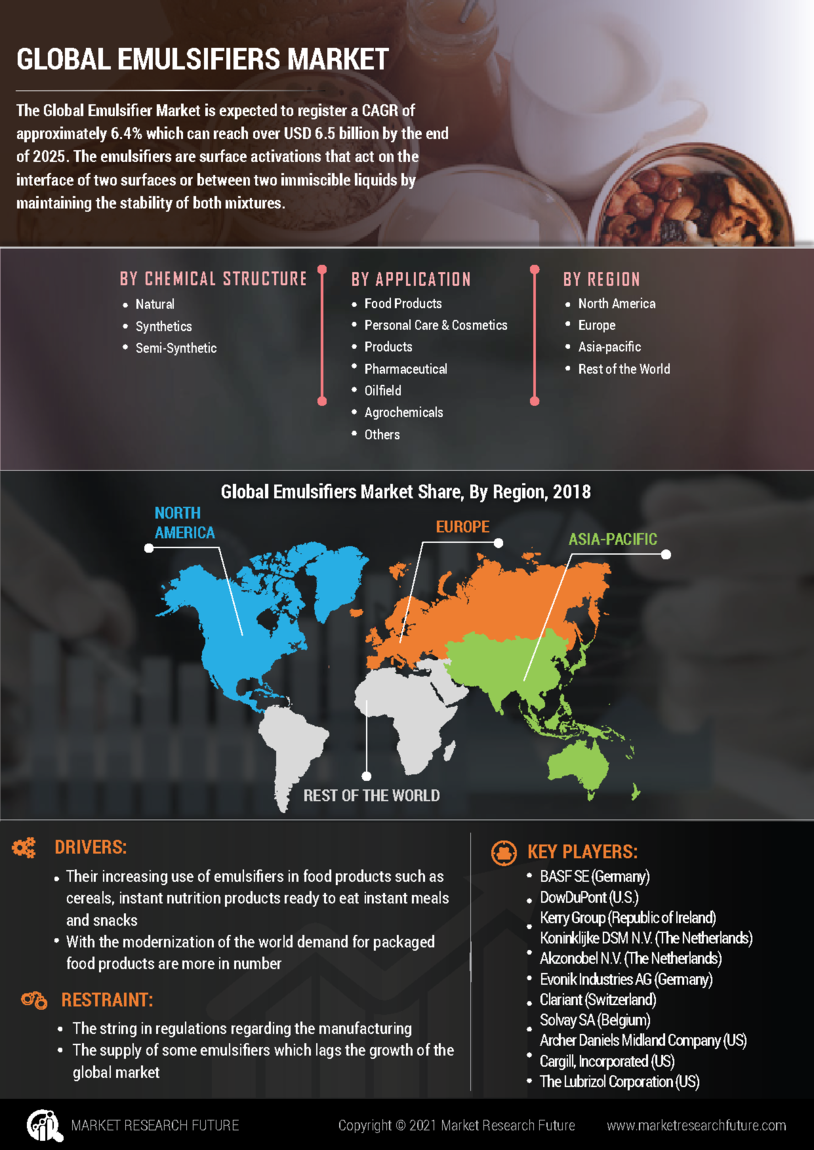 The emulsifier market is expected to register a CAGR of approximately 6.10% which can reach over USD 7.4 billion by the end of 2030. The rising use of emulsifiers in food products like instant nutrition products, desserts, cereals, ready-to-eat instant snacks and meals, and others are projected to drive the global market growth during the forecast timeframe. Also, the rising modernization and population are estimated to fuel the global market growth. However, the string of regulations regarding the supply of some emulsifiers as well as the manufacturing is estimated to hamper the growth of the global market for Emulsifiers during the forecast period.

The global market for Emulsifiers has been segmented on the basis of application and chemical structure. Further, the chemical structure has been categorized into semi-synthetic and natural-synthetic. The synthetic emulsifiers are further sub-categorized into cationic, anionic, and nonionic. Based on the application segment, the global market for Emulsifiers is classified into cosmetic products, pharmaceuticals, food products, oil Emulsifier fields, personal care, agrochemicals, and others.

The current Emulsifiers Market has covered different geographical locations like North America, Latin America, Asia-Pacific, the Middle East, Africa, Europe, and the rest of the world. Among these, the dominating region is North America. COVID 19 Analysis

As per the growing pandemic, the emulsifiers market has dropped down in the level of profit. Although emulsifiers are used in food products and in personal care and cosmetics products too. Hence the emulsifier market industry hasn't completely stopped because it has to provide all the necessities to the consumers in tough times too. The profit has not raised and the loss has been met but the loss has not further increased. The stagnation in the cost level has taken place which does sound like good news. Emulsifiers will soon be consumed at the large level that they used to be in the earlier days. It is believed that by 2022 the situation will normalize. Due to the lockdown, people couldn't get out of the houses too often which led to the limited buying of products.Competitive Landscape


These most prominent major key players in the global emulsifier market use various strategies to cater to the increasing need of the customer. They use various policies and strategies like collaborations, mergers, and acquisitions, establishing a joint venture, developing the new production process, innovation in the existing product, expansion of business, partnership to increase their customer base in the global potential market

The emulsifiers are surface activations that act on the interface of two surfaces or between two immiscible liquids by maintaining the stability of both mixtures. Emulsifier molecules have two different ends one and called the hydrophilic end the second and called the hydrophobic end. Hydrophilic forms bond with water and the hydrophobic forms bond with other liquids but not water. Based on the chemical structures of the emergency fires they are categorized as natural synthetic and semi-synthetic.

As global emulsifier market growth is increasing It is obvious to see many factors that affect the growth of emulsifiers. What drives the global emulsifier market is their increasing use of emulsifiers in food products such as cereals, instant nutrition products ready to eat instant meals and snacks, desserts, and many others. With the modernization of the world demand for packaged food products are more in number. People are convinced to have an improvement in the shelf life which propels the emulsifier market globally. For emergencies, fires are used in pharmaceutical industries in creams and jails tablets and syrups as a result of non-toxicity chemical inertness and also due to an increase in the shelf life of the product.

As the global emulsifier market is growing at a tremendous rate many opportunities are being offered by the world to further increase the global emulsifier market value. The opportunities that are offered are the rising health consciousness among the consumers which is coupled with the rising disposable income of all the developing nations. Product consumption is slowly increasing day by day due to people being more concerned about personal care. The cosmetic industry is increasing with the use of emulsifiers in creams, lotions, shampoo, and cosmetics. Emulsifier that is used in cosmetics due to its property of being vicious and high thermal heat and shear stability. All these various opportunities are flourishing around the market with the increase in demand for health care personal care and cosmetic industries. Rising demand for skincare and hair care products is lifting the market growth.

The global emulsifier market in the global market has been divided based on the chemical structure, application, and region.

Based On Chemical Structure

The global emulsifier market in the global market has been divided based on the chemical structure into natural-synthetic and semi-synthetic. Synthetic emulsifiers are further divided into anionic, cationic, and nonionic.

The global emulsifier market has been divided based on the application into food products, personal care, and cosmetic products pharmaceutical, oil Emulsifier field, agrochemicals, and others.

Based On The Region

The global emulsifier market has been divided into various regions. These regions are North America, Asia-Pacific, Latin America, Europe, and the Middle East, and Africa.

The global emulsifier market industry has been divided based on the region including North America, Asia-Pacific, Latin America, Europe, and the Middle East, and Africa.

The market in the Asia Pacific accounts for the largest global emergency fire market share. In 2018 global emergency fire market revenue was the highest. Now it is expected to see significant progress in the forecasted period. The global emulsifier industry has a rising demand for packaged food products. This demand has increased due to the convenience and longer shelf life of the product. The personal care and cosmetic industry are increasing the prevalence of international players.

In North America, it is the second-largest market holder. In 2018 global emulsifiers Market size will increase in this region. The conception is increasing in the healthcare industry with rising geriatric population also there's an increasing spend on health care.

People of Europe seem to accept emulsifiers quite nicely. Hence the market in this region is expanding prominently. Cosmetics and other industries are searching for anti-aging and hair care products. The major contributor is the food growing and beverages industry demand.

Lastly, the Middle East and Africa market is expected to grow a healthy CAGR during the forecasted period. Rising demand for skin whitening products and color cosmetics in these regions offers the scope for growth.

A major deal has been signed between BIC ingredients and AAK. This contract is proposed to enhance the presence of AAK in the European lecithin market. Moreover, this will support the current vision of the company as a top supplier of specialty lecithin across the globe. Usually, lecithin is considered a key natural emulsifier that is sourced from plant-based oils, for example, rapeseed oil, sunflower, and soy.

What is the market size of the global emulsifier

The global emergency fire has USD 7.4 billion and significant value expected in 2030

What is the CAGR of the global emulsifier market?

The CAGR out of the global emulsifier market is 6.10% approximately in the forecasted period of 2022-2030.

What is the report coverage in this global emulsifier research report?

What are the geographical areas covered in this research report?

The geographical regions covered in the research report are North America, Europe, Asia Pacific, and the rest of the world.

What are the major market key drivers?

The major market drivers are the increasing use of emulsifiers and food products. Also the growing demand for packaged food products rising health consciousness rising disposable income in the developing nations.

What are the different market segmentations covered under this research report?

The various market segments that are covered under this market report are chemical structure and application.