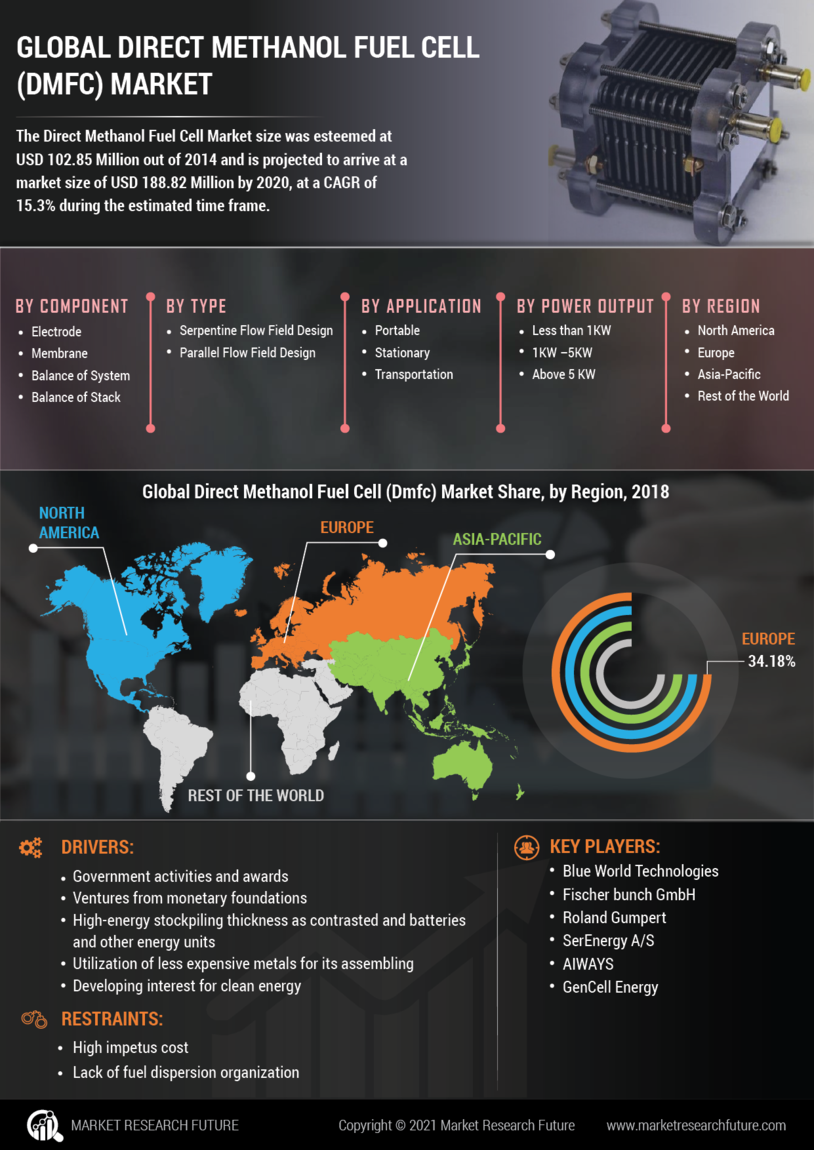 The DMFC units are a feasible option compared to other fuel sources, such as batteries and diesel-controlled motors. While DMFCs can be refueled inside the space of minutes, batteries require hours to re-energize. Supplanting batteries with DMFCs would likewise kill the requirement for a battery charging foundation inside the office. The DMFC is a step-by-step swapping of batteries for material taking care of uses in forklift trucks. Expanding mindfulness about clean energy and interest for zero outflow fuel sources drives the interest in the Direct Methanol Fuel Cell Market share. Moreover, strict ecological guidelines would go about as an impetus in driving the interest in this market. The guidelines would be prone to constrain nations to move their essential energy blend towards cleaner energies, such as power devices.

Worldwide Direct Methanol Fuel Cell Market analysis report 2021 might be a particular business concentrating on this business condition that investigates creative ways for business development and depicts fundamental variables like prime makers, creation worth, critical areas, and development pace. This report centers around Professional Global Direct Methanol Fuel Cell Market 2021-2026 volume and worth at Global level, provincial level, and friends level.COVID-19 can influence the worldwide economy in three essential manners: by straightforwardly influencing creation and request, by making inventory network and market interruption, and by its economic effect on firms and monetary business sectors.

The direct methanol fuel cell market revenue is tolerably merged. A portion of the vital participants in this market incorporate:

These exercises have cleared the route for the development of the business and client base of market players. The market players from the direct methanol fuel cell market outlook are expected to have worthwhile development openings later on with the rising interest in the direct methanol energy unit market. Underneath referenced is the rundown of few organizations occupied with the immediate methanol power module market.


Government activities and awards for fuel cell device research, ventures from monetary foundations, high-energy stockpiling thickness as contrasted and batteries and other energy units, utilization of less expensive metals for its assembling, developing interest for clean energy, and are driving the development of the worldwide Direct Methanol Fuel Cell market.


Taking an increasing at the progressing advancement in the direct methanol fuel cell market trends are relied upon to observe a decrease in costs and become serious with dainty movie batteries in the following, not many years.


Technical constraints and costly R&D activities are expected to prevent the immediate methanol power module market over the following seven years. Different components prepared to do contrarily affecting the market are the high impetus cost and a lack of fuel dispersion organization.


Like batteries, all power devices' presentation corrupts with age, and the stack continuously loses productivity.


The overall Direct Methanol Fuel Cell market analysis is required to develop at a CAGR of generally 7.2% throughout the following five years. It will arrive at 140 million USD in 2024, from 100 million USD in 2019, as indicated by another investigation.


Fuel cells are presently perhaps the most professional advancements that convert fuel to power. Energy units are utilized in a broad scope of utilizations, including transport and crisis reinforcement power applications. Direct methanol fuel cell market growth is still in the improvement stage and expected to cover significant offers in the energy component market.

The customary discharge decrease advancements identified with the inner burning motor have gotten too obsolete to even think about gathering the current emanation guidelines. Therefore, the car business moves towards cleaner wellsprings of fuel, for example, energy components and batteries, to control vehicles.

Direct Methanol Fuel Cell market value has been going about as the direct substitute to these electric vehicles encountering a blast in the worldwide market, particularly in India and China. The deals of EVs have been expanding ridiculous period and are required to proceed with the comparative pattern over the figure time frame.


This Direct Methanol Fuel Cell Market value is segmented into various parts according to application outlook such as Portable, Transportation, Stationary, etc.


The overall Direct Methanol Fuel Cell Market is again segmented into various parts according to component outlook such as Electrode, Balance of System, Membrane, and Balance of Stack.


The whole market is divided into different segments such as Asia Pacific, North America, Europe, The Middle East, and Latin America.

Asia-Pacific is the primary market for Direct Methanol Fuel Cell Market size, attributable to huge interests in energy unit advancements, particularly in Japan and South Korea. Legislatures of nations, for example, Japan and South Korea, have likewise been embraced activities to lessen reliance on thermal power and petroleum derivative and advance toward sustainable power. The Japanese government is putting resources into energy component innovation that self-control the 2020 Olympics in Tokyo. Like Singapore, Malaysia, India, and Indonesia, different nations have begun or are required to begin selective projects to advance power modules in territorial business sectors. These nations are right now zeroing in on back-up power (fixed application) energy components. India is required to put resources into fuel cell energy component frameworks that will give the back-up capacity to telecom towers from 2015 to 2020.

The direct methanol fuel cell industry DMFCs wipes out the requirement for charging framework for the battery. Besides, methanol as a fuel is economical, has high energy thickness, and can be effectively moved and put away inside the distribution center, which tends to help the market. This like this prone to give the chance to overwhelm the market in the coming future.

The outline part of the worldwide direct methanol fuel cell market analysis looks at subtleties, for example, market drivers, openings, limitations, serious scenes, and critical patterns of the present just as in the previous years. Watchman's five powers model has been utilized to clarify the market's brutal scene and study the possibility of new tasks. Itemized business profiles of a portion of the critical sellers working in the market are incorporated, with intensive insights about their new exercises, incomes, item portfolios, contact subtleties, and other fundamental subtleties.

Which competitors are likely are the peak in the direct methanol fuel cell (DMFC) market?

Which regions are adding the direct methanol fuel cell (DMFC) market in the coming years?

The Asia-Pacific region is expected to be bolstered by the market.

What is the CAGR proficiency of the direct methanol fuel cell (DMFC) market?

A 15.28% CAGR is expected to create momentum in the global market.

What factors are the catalyst for direct methanol fuel cell (DMFC) market development in the coming period?

The high rates of industrialization are estimated to motivate the global market.

What are the factors that may direct methanol fuel cell (DMFC) market expansion?

The implementation cost of technology is anticipated to encourage the global market.

What are the segments in the direct methanol fuel cell (DMFC) market?

The segments of type, component, application, power output, and region are existing in the market.

What are the uses for direct methanol fuel cell (DMFC) market?

The applications of stationary, portable, and transportation are encouraging the market.