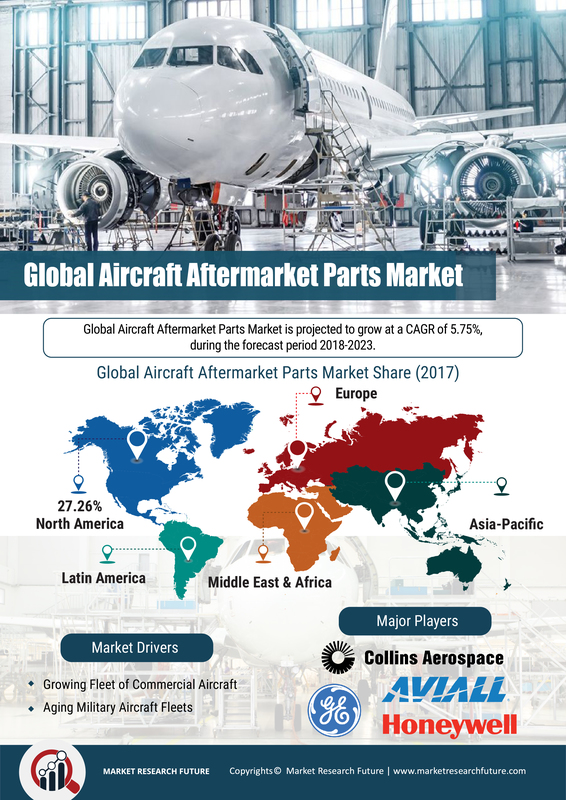 Aircraft aftermarket parts are essential in ensuring the smooth operation of an aircraft. These parts are used by MRO service providers and in aircraft-on-ground (AOG) facilities. The rapid expansion of the aircraft fleet and increasing focus of OEMs on providing aircraft MRO is expected to drive the demand for aftermarket parts, contributing to the market growth.

The aircraft aftermarket parts market is expected to witness significant growth owing to factors such as the developing armada of commercial airplanes as well as the maturing military aircraft fleet. However, the worldwide aircraft aftermarket parts market will confront difficulties and restrictions because of high import obligations on airplane spare parts and tough guidelines.

The availability of aircraft aftermarket parts on an E-commerce platform can create a lucarative market opportunity for the market.

The global fleet is likely to reach 45,000 aircraft by 2036. Moreover, the high demand for air travel in developing regions, such as Asia-Pacific, the Middle East, and Latin America, is expected to lead to an increase in the number of aircraft in these regions. On the other hand, the FAA expects that over 15,000 aircraft would be delivered in North America and Europe by 2036.

The growing commercial fleets are expected to result in an increased demand for OEMs and MRO service providers, which, in turn, is projected to drive market growth.

Distribution networks play a vital role in the availability of components at a particular location. Conventional distributional channels have several drawbacks such as long turnaround time, improper management of parts and resources, and backlogs, which hamper supplier-customer partnerships. The introduction of e-commerce platforms in distribution networks improves the overall efficiency of aircraft aftermarket parts providers.

The FAA is constantly updating its standards and regulations and parts manufacturers have to keep abreast of all such changes. Thus, the increasing stringency of FAA regulations is expected to hamper the market growth.

The aircraft aftermarket parts market is growing at a steady rate and is expected to upsurge in near future. This is due to rising investment in delivery drones and increasing focus on reducing the time in last-mile delivery. The value chain analysis for the aircraft aftermarket parts comprises five major components which start with the research and product development followed by manufacturing of the products, distribution, and sales, and ends with post-sales services.

The global Aircraft Aftermarket Parts market has been segmented on the basis of Parts and Applications.

On the basis of Parts the market has been segmented into MRO Parts, Rotatable Scrap Replacement Parts, Consumables, and Expendable. The Expendable segment has been further bifurcated into Lamps, Filters, Fasteners, Seals and Gaskets, Switches, and Others.  The MRO part segment accounted for the largest market share in 2021 and is expected to remain the same during the forecasted period.

North America accounted for the largest market share in 2021. Increasing defense expenditure and stringent government regulations regarding aircraft aftermarket parts and maintenance in North America are propelling the market growth. For example, in the US, the Aircraft Maintenance Division of the Federal Aviation Administration (FAA) develops policy procedures and regulates maintenance aspects of the air carrier, general aviation, and commercial operators is driving the demand in the region.

The global market for Aircraft Aftermarket Parts is projected to witness healthy growth during the forecast period, due to the increasing commercial aircraft fleet. The global market represents strong numbers in terms of consumption.

Which part segment is driving the market?

The MRO part segment is expected to drive the market during the forecasted period.

AAR (US), A.J. Walter Aviation Limited (UK), Aviall (US), and Eaton (Ireland) are expected to be the major competitors in the Aircraft Aftermarket Parts market during the projected period.

The North American region is expected to be the largest market for Aircraft Aftermarket Parts market during the forecast period.

Which region can thrive in the worldwide aircraft aftermarket parts market?

High import duties on aircraft spare parts may slow the growth of the Aircraft Aftermarket Parts market during the forecast period.