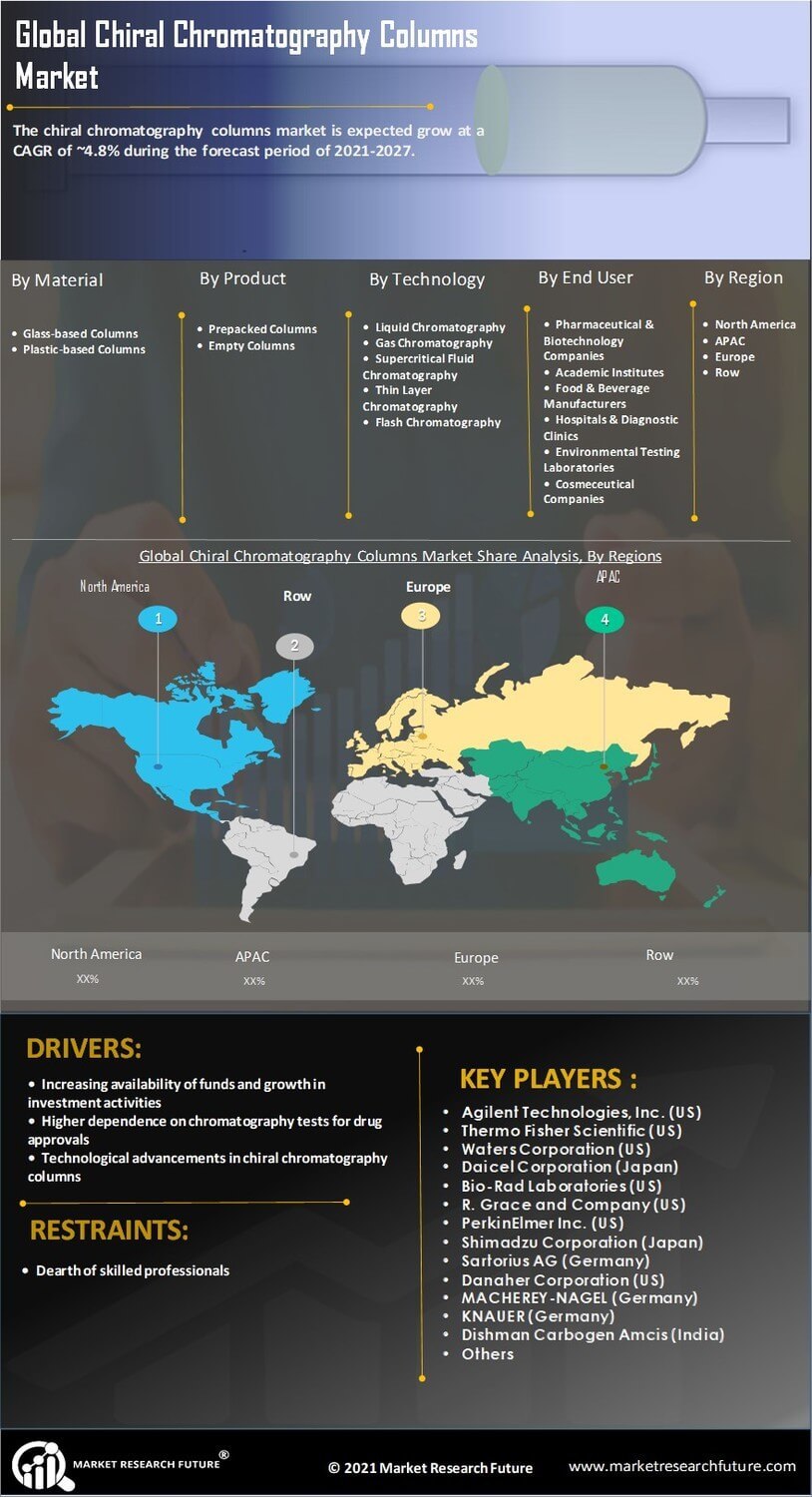 Chiral chromatography columns are analytical instruments used to separate optical isomers. The columns hold a stationary phase containing enantiomer within them. Approximately 60% of all pharmaceutical drugs are chiral and the production processes need application of chiral chromatography. The market is driven by various factors such as increase in life science R&D expenditure, rise in production of chiral drugs and the increasing demand for analytical instruments. However, the lack of skilled professionals may hamper the growth of the market.

The present COVID-19 pandemic has impacted people all over the world and forced the closure of operational facilities across the world. During the lockdown, the healthcare business faced extraordinary challenges such as supply chain disruptions, resulting in an increase in warehouse inventories of manufactured goods. The market for chromatography instruments and consumables did not hamper to a great extent.

Furthermore, the COVID-19 pandemic also created growth opportunities for the companies involved in the chiral chromatography columns industry. This is due to the increased R&D efforts to produce drugs for COVID-19 such as repurposing the development of approved antiviral drugs as candidates for COVID-19. For instance, chloroquine and its hydroxyl analog hydroxychloroquine (HCQ) administered as racemates showed inhibitory effects on COVID-19 and demand for these racemates grew exponentially. Manufacturers were focused on developing single enantiomeric versions of these racemic drugs. Furthermore, large number of racemic drugs requiring application of chiral chromatography columns for separation of compounds is further increasing demand.


Chiral chromatography columns are used extensively for separation of various pharmaceutical compounds. With respect to R&D activities; emerging startups and clinical-stage companies are dependent on leading players and investment firms for technology transfer and scale-up of production processes, respectively. An increasing number of investment activities for R&D processes is expected to support growth of chiral chromatography columns market during the forecast period. For instance, JSR Life Sciences, LLC (US), a subsidiary to JSR Corporation (Japan) during March, 2021 announced the launch of its ‘JSR Life Sciences Corporate Venture Fund’ for emerging life science companies to accelerate novel therapies and innovative technologies. Thus, the increasing R&D investments drives the growth of the chiral chromatography columns market.


Large amounts of organic solvents are required for conventional HPLC techniques and it results in generation of large amount of wastes. Similarly, non-renewable and expensive gases such as Helium are used in gas chromatography when combined with mass spectrometry.

The lack of such skilled professionals may hamper growth of the market as irregularities in the performance of these techniques may result in significant losses to the companies. However, companies are setting up training initiatives to overcome this restraint.

The global chiral chromatography columns market is projected to exhibit significant growth over the forecast period, which can be attributed to factors such asan increase in life science R&D expenditure, high dependence on chromatography tests for drug approvals, a rise in the production of racemic drugs, and the increasing demand for biopharmaceutical products. The value chain analysis for the chiral chromatography columns industry comprises four major components, which start with research & product development, followed by the manufacturing of the products, distribution& sales, and ends with post marketing surveillance.


Glass-based columns are utilized for chromatographic applications as they provide advantage in monitoring of components. Silica impregnated columns are effective in scouting a suitable chiral chromatography separation mode for further analysis.


Plastic-based chiral columns are precision-molded in sizes from premium-grade, chemically inert plastics. These columns are more chemically-resistant and appropriate for use with organic solvents and stronger acidsand alkalis.


Pre-packed chromatography columns have a stationary phase already pre-filled within the column and can be used directly after attaching to a chromatography system. This removes the extra steps of column cleaning, sterilization, and re-packing. Product innovations and launches are also driving growth for this segment. For instance, in September 2020, Bio-Works Technologies (Sweden) launched two new resins Work Beads NiMAC and Work Beads Dsalt, which are also sold in pre-packed columns. These resins show high resistance to chelating agents like EDTA and reducing agents like DTT. Prepacked columns are further segmented into analytical columns and preparative columns.


Empty columns are important in works on the principle of specific binding that happens between a lig and in the stationary phase and its binding partner. These bindings may happen between enzyme/substrate, antibody/antigen, or enzyme/inhibitor. Affinity chromatography is the first step if not the only step in the purification process of molecules which boosts the demand for this segment.


The solvents are in the mobile phase in liquid chromatography. The identification and quantification of food compositions, pharmaceuticals, and other bioactive molecules are gaining wide application in analytical laboratories. The reagents used for HPLC analysis are most important for increasing and decreasing retention time.


Gas chromatography is mostly used when the mixture's chemical components are volatile and thermally stable. GC reagents have applications in various industries from research to manufacturing, including chemical, pharmaceutical, food & beverage, and space research.


Flash chromatography is a process in which a vertical glass (column) is placed and is packed with the solid stationary phase from which the mobile phase (liquid form) is passed through it by gravity or some external pressure. The eluent which is a liquid, under gas pressure normally nitrogen or compressed air is rapidly pushed through a short glass column.


Pharmaceutical companies use chromatography to prepare large quantities of extremely pure materials and analyze the purified compounds for trace contaminants. The rising use of chromatography in the pharmaceutical industry is for the separation of chiral compounds. Separating specific amino acid, protein, or other biomolecules from a sample are some of the applications of chiral chromatography to the biotechnology industry. Assessing yield, cost, and purity of products such as inulin, growth hormone, interferons, erythropoietin, and others is important in this industry.


Research & academic institutes mostly utilize chiral chromatography for educational purposes or develop new separation techniques on a pilot scale. The growing number of research organizations and availability of research grants may contribute to the growth of this segment.


Therapeutic drug monitoring, toxicology, and doping analyses are the major applications of chromatography in clinical applications. Diagnostic laboratories use chromatographictechniquesfor the diagnosis of human metabolic disorders which are used by hospitals for therapeutic purpose.


During cosmetics production, chromatography systems are typically used in the initial part of the process, during ingredient discovery and purification. Active constituents used in cosmetics can either be synthesized in a laboratory or extracted from crude natural products.


North America held the largest market share in chromatography columns in 2020 due to factors like presence of key players like Thermo Fisher Scientific Inc. (US), Agilent Technologies, Inc. (US), and Bio-Rad Laboratories, Inc. (US). Furthermore, the increasing R&D investment drives the chiral chromatography columns market in the region. For instance, according to American Association for the Advancement of Science (AAAS), the funding for National Institutes of Health (NIH) for fiscal year 2022 was increased by 15% compared to fiscal year 2021.


The Europe chiral chromatography columns market is accounted to hold a significant market share in 2020. Europe also houses several key players in the region, such as, Merck KGaA (Germany), Biotage (Sweden), and KNAUER WissenschaftlicheGeräte GmbH (Germany). These key players are also launching new products and investing in production facilities, further driving market growth. For instance, in August 2021, CARBOGEN AMCIS (Switzerland) signed a co-investment agreement with one of its key European customers. The investment includes the additions to the CARBOGEN AMCIS Neuland site of a medium pressure chromatography column (200L), a preparative 20 cm HPLC system and short path distillation equipment. This agreement is following a previous USD 6.5 million investment made in 2017 by the same customer for CARBOGEN AMCIS’ Neuland site.


The rapid growth of the Asia-Pacific market is due to the developing infrastructure for research and increasing manufacturing companies, and an increase in the number of academic institutes. Countries like Japan in this region have well developed healthcare infrastructure along with the presence of key company headquarters like Daicel Corporation (Japan), and Shimadzu Corporation (Japan), whereas India is rapidly developing in the healthcare R&D space. China had spent the highest R&D expenditure up till 2020 which had increased by 10.3% in 2020. These factors enable the Asia-Pacific region to grow at the highest CAGR during forecast period.


The Rest of the World region is segmented into the Middle East, Africa, and Latin America. The chiral chromatography columns market in the region is driven by technological developments and the growing number of research studies. Government initiatives to bring technological advancements in the region and global players expanding R&D capabilities in the region, drive growth for market here.

The global chiral chromatography columns market is characterized by the presence of many global, regional, and local vendors catering to the demand created by research scientists and pharmaceutical and biotechnology companies operating in the industry. The growing demand from researchers and manufacturers is propelling the chiral chromatography columns market growth. The market is highly competitive, with players competing and partnering to gain a substantial market share. For instance, in January 2021, Sartorius (France) acquired Novasep's (France) chromatography process equipment division. The prominent players are involved in strategic agreements and joint ventures to sustain their market positions.

The study covers the existing short-term and long-term market effects, as well as helping decision-makers to draught short-term and long-term plans for businesses by region. The report covers major regions in North America, Europe, Asia-Pacific, and the Rest of the World. The report analyzes market drivers, restraints, opportunities, challenges, Porter's Five Forces, Value Chain, and impact of COVID-19 on the market.

The scope of the global chiral chromatography columns market study includes market size analysis and a detailed analysis of the manufacturer's products and strategies. The market has been segmented based on material, product, technology, end user and region.