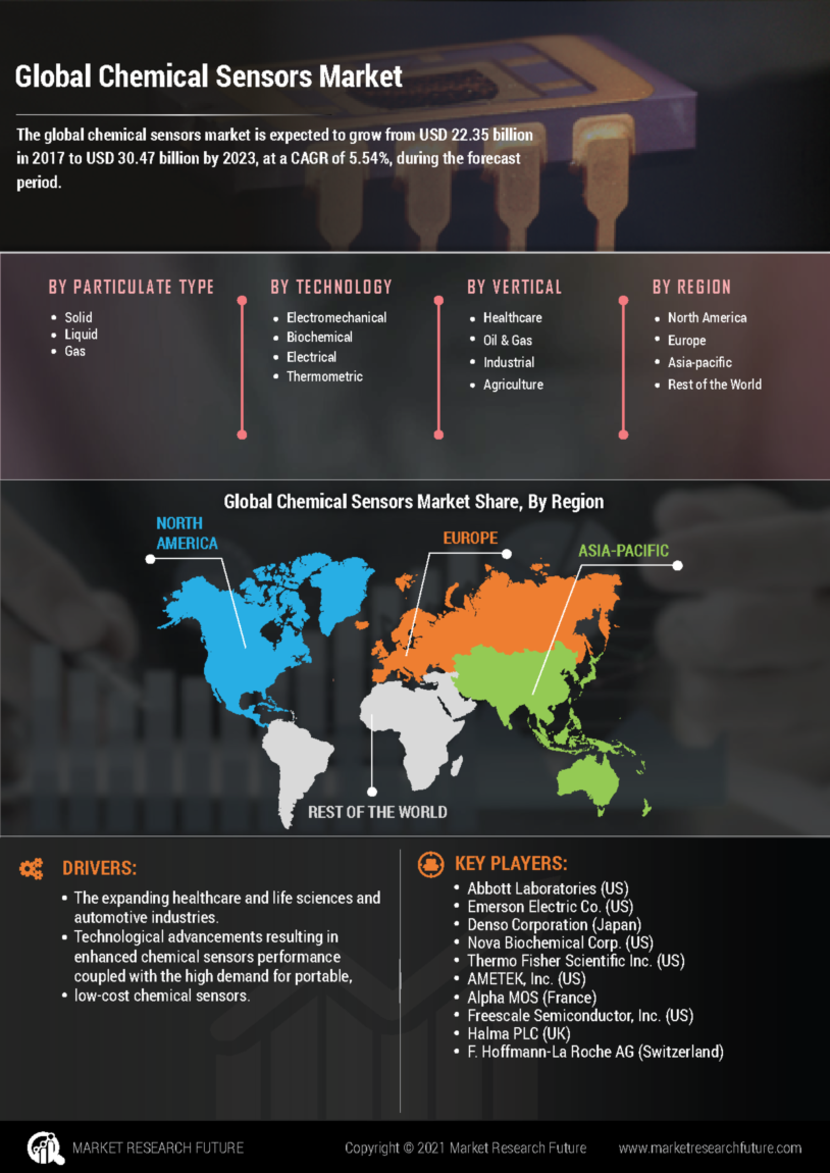 The global chemical sensors market is executing a good CAGR growth of 5.54% during the ongoing forecast period of 2017-2023. Based on the market expansion steps and opportunities, the global market is likely to finish the forecast period by reaching a market valuation worth USD 30.47 billion in the year 2023. During the historic period for the market that ended in 2017, the market closed by reaching a global figure worth USD 22.35 billion. The main reason which is helping the global market improvise post the pandemic period of 2019-2020, is the technological advancements on the way as a part of the global market operations which promise an enhanced performance and is coupled with a huge market demand related to the requirements of sensors that are both portable and suit the budget and affordability of a larger audience.

The applicability of the chemical sensors market products that are sensors has a major role to play in analyzing the chemical composition of various samples that are available. This factor is enhancing the need of the market operations and hence, influencing the adoption of these sensors that will help the global market undergo the expected growth during the forecast period that ends in 2028.

Since the initial cases of the pandemic were reported in Wuhan, China, followed by other global regions and countries, the production and manufacturing units are having a hard time developing sudden changes and implement them to suit the current market needs. To detect coronavirus diseases, various tests and rapid kits have been developed. The government has imposed restrictions in the form of lockdown and restricting the functioning of the companies, corporates, and entities. The pandemic struggles are grilling the ability of the production and manufacturing units because there is a lack of availability of reliable resources that will have an impact on the finished products and ability of the market to maintain a proper equilibrium of the chemical sensors market forces of demand and supply.

Hence, the government is investing in the large-scale development of the chemical sensors market size that will further, expand the scale of operations and meet the needs of the target audience that is located in various mushrooming global regions.

Out of the total world population, approximately 962.3 million people belong to the geriatric group of people. The aging population is more exposed to the vulnerabilities related to obnoxious diseases and with a steep rise in the occurrence and contraction of diseases, the demand for chemical sensors is being created on a large scale. Also, its use across several clinical applications like blood gas measurements and blood glucose are emerging as one of the major sources that happen to demand the market functioning and reliable operations on the global scale. The use of the chemical sensors for analytes employed while conducting the chemical industrial process is also gearing up for large-scale market integration during the forecast period that ends in 2028.

As the name suggests, the market encourages certain environmental concerns for the market and hence, bar the market to grow as per the prediction of the market leaders and experts during the forecast period that ends in 2028. Also, the market is witnessing an emergence of factors like high maintenance and penetrating need for air-conditioned shelter rooms. The market is also likely to come across frequent recalibration and constant development of the accuracy issues that will restrain the global market operations to grow as per the predictions during the forecast period that ends in 2028.

The development of sensors and related market components is undergoing heavy interest and development for the market and its growth during the ongoing forecast period of 2021-2028. For instance, the Korea Advanced Institute of Science and Technology (KAIST) has been invested and largely working on the development of chemical nanosensors as a part of the global market operations and aim at expansion during the current market period. These developments help in rapidly analyzing the components related to exhaled breath to detect the trace molecules that are known to have an association with creatin types of diseases. 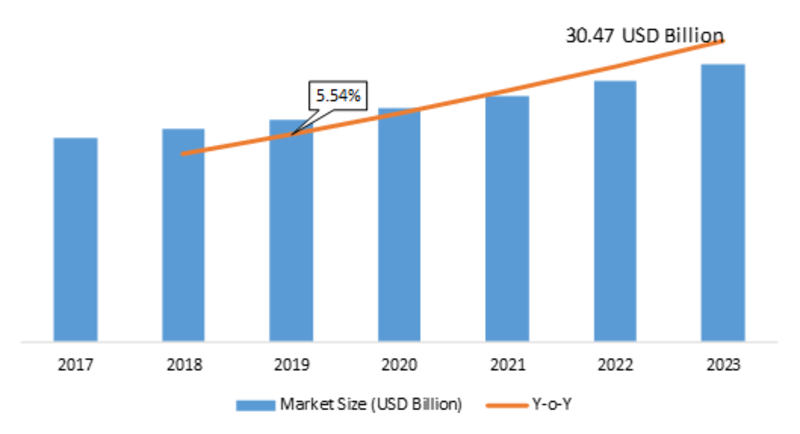 The chemical sensors market has been divided all across the globe based on the particulate type, technology, and verticals.

Based on the Particulate Type

The chemical sensors market has been divided all across the globe based on the particulate type into gas, liquid, and solid. Chemical sensors various according to the phase.

Based on the Technology

Based on the Verticals

Being the fastest-growing region, the second-largest market share in the chemical sensors market is held by the Asia-Pacific region owing to the increasing growth of the automotive industry and healthcare and life sciences industry. Increasing health awareness is another major driving factor.

The third-largest market share in the chemical sensors market all across the globe is held by the European region owing to the presence of countries like the UK, France, Germany, and Italy. High per capita disposable income is another contributing factor.

The most prominent major key player in the chemical sensors market all across the globe are mentioned below:

These major key players use various strategies to sustain their market position in the chemical sensors market in the global market by going for mergers, and acquisitions, by collaborating, establishing a partnership, developing a new production process, setting up a new joint venture, developing a new product line, innovation in the existing product, and many others to expand their customer base in the untapped market of the chemical sensors all across the globe.

What is the predicted market size of the global chemical sensor market?

The global chemical sensor market is poised to register a market value of USD 22.35 billion at a CAGR of approximately 5.54% over the review period (2017-2023).

What are the recent trends of the global chemical sensor market?

The increasing demand for the chemical sensor from oil and gas industry coupled with the integration of technological innovation, is creating opportunities for market players.

Which region has the largest market share in the global chemical sensor market?

The North America region holds the largest share of the market across the globe, followed by Europe and the Asia Pacific region. The U.S. and Canada are contributing substantially towards the North America market share.

What is the segmentation of the global chemical sensor market?

The global chemical sensor market is analyzed based on particulate type, vertical, and application, wherein the oil and gas application segment is projected to witness maximum demand over the review period.

Who are the key players in the global chemical sensor market?

A few significant players in the global chemical sensor market for Abbott Laboratories (US), Emerson Electric Co. (US), Denso Corporation (Japan), Nova Biochemical Corp. (US), Thermo Fisher Scientific Inc. (US), and others.