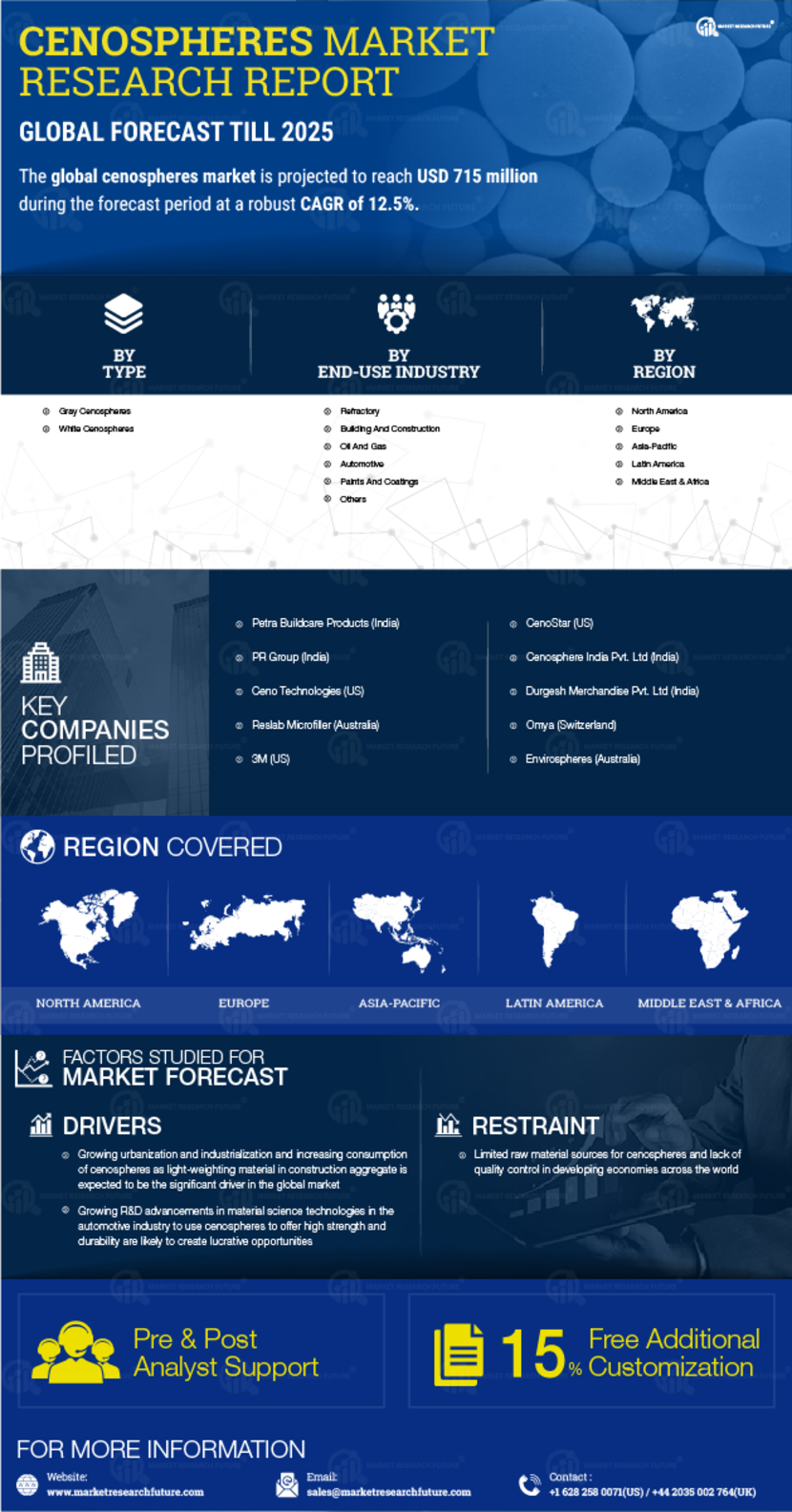 Market Overview: Cenospheres are hollow, inert, and lightweight ceramic spheres and are prominently made up of alumina and silica, which is obtained as a byproduct of coal combustion in thermal power plants. They are hard and rigid, which makes it's suitable for diverse applications ranging from refractory, building and construction to automotive, and oil and gas. Furthermore, it exhibits high thermal insulation, reduced shrinkage, and waterproof characteristics. These spheres are generally filled with air or inert gas which makes it easy to handle and thus remains unaffected by water, solvents, acids, and alkalis. According to MRFR analysis, the global cenospheres market is projected to reach USD 715 million during the forecast period at a robust CAGR of 12.5%. Cenospheres are almost 30% lighter than conventionally used resins and about 75% lighter than most minerals used as extruders or fillers, which makes it a suitable material in the building and construction industry. Growing urbanization and industrialization and increasing consumption of cenospheres as light-weighting material in construction aggregate is expected to be the significant driver in the global market. Also, increasing demand for cenospheres in lightweight drilling fluids and drilling cement in oil and gas industry is further anticipated to augment the global market growth. Furthermore, growing R&D advancements in material science technologies in the automotive industry to use cenospheres to offer high strength and durability are likely to create lucrative opportunities for the market players operating in the global cenospheres market. Also, improvement in recovery methods of cenospheres from fly ash lagoons is further anticipated to offer immense opportunities to the producers of cenospheres. Moreover, there is a growing consumption of cenospheres in plastic and metal composites, mainly in the automotive and construction industries; this trend is expected to maintain its dominance in the coming years. However, limited raw material sources for cenospheres and lack of quality control in developing economies across the world is likely to hamper the global market growth during the forecast period. Global Cenospheres Market Share, By Application, 2018 (%) Source: MRFR Analysis 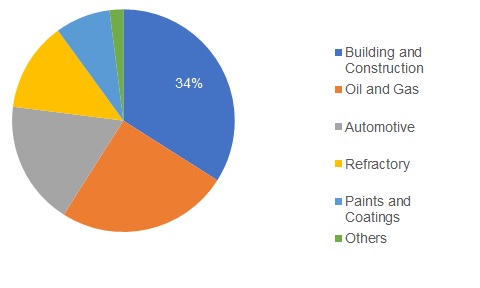 Regional analysis: The global cenospheres market has been studied across five key regions, namely, Asia-Pacific, North America, Latin America, Europe, and the Middle East & Africa. The North American market accounted for the largest market share in 2018 and is projected to grow at a robust CAGR of over 12% during the forecast period. This is primarily attributed to the upsurge in oil and gas activities post the shale gas boom in the region. The US is the leading country in the region owing to the increasing R&D investments in better production of cenospheres from fly ash lagoons. Moreover, it is consumed mainly in applications such as oil cement, drilling muds, and as acid grouting compounds. The Asia-Pacific market is projected to register the highest CAGR during the review period owing to the rising automotive and construction industry in the region. Cenospheres are widely consumed in construction aggregates and automotive light-weighting parts in emerging economies. Furthermore, the growing construction of residential and commercial buildings propels the regional cenospheres market. India is the leading country in the region followed by China, Australia & New Zealand, Japan, and South Korea owing to the increasing consumption of the product in paints and coating and refractory industries. The European market accounted for a substantial market share in 2018, owing to the growing utilization of cenospheres in well-established industries such as automotive and construction. It is largely consumed as plastic and syntactic composite foams in lightweighting application in automobile and buildings. Germany is the major contributor in the region followed by France, Italy, Switzerland, and the Netherlands. The Latin America and the Middle East & Africa markets are projected to register a steady CAGR in the coming years owing to limited end-use industries in the region. Segmentation Analysis: The global cenospheres market has been segmented based on type, application, and region. Based on type, the global cenospheres market has been bifurcated into gray cenospheres and white cenospheres. Based on application, the global cenospheres market has been classified as refractory, building and construction, oil and gas, automotive, paints and coatings, and others. By region, the global Cenospheres market has been studied for five key regions—Asia-Pacific, North America, Latin America, Europe, and the Middle East & Africa. Key players: Some of the key players operating in the global cenospheres market are Petra Buildcare Products (India), PR Group (India), Ceno Technologies (US), Reslab Microfiller (Australia), 3M (US), CenoStar (US), Cenosphere India Pvt. Ltd (India), Durgesh Merchandise Pvt. Ltd (India), Omya (Switzerland), Envirospheres (Australia), Qingdao Eastchem Inc. (China), and Delamin Limited (UK). Target audience:

What is the projected valuation for the Cenospheres Market by 2025?

The Cenospheres Market is slated to achieve a valuation of USD 715 million.

What is the projected CAGR for the Cenospheres Market during the forecast period of 2020- 2027?

The projected CAGR would be 12.5% during the forecast period.

What could prevent the Cenospheres Market growth?

The North American Cenospheres Market has the largest market share.

What is driving the North American Cenospheres Market ahead?

Oil & gas and shale gas exploration to drive the market ahead.