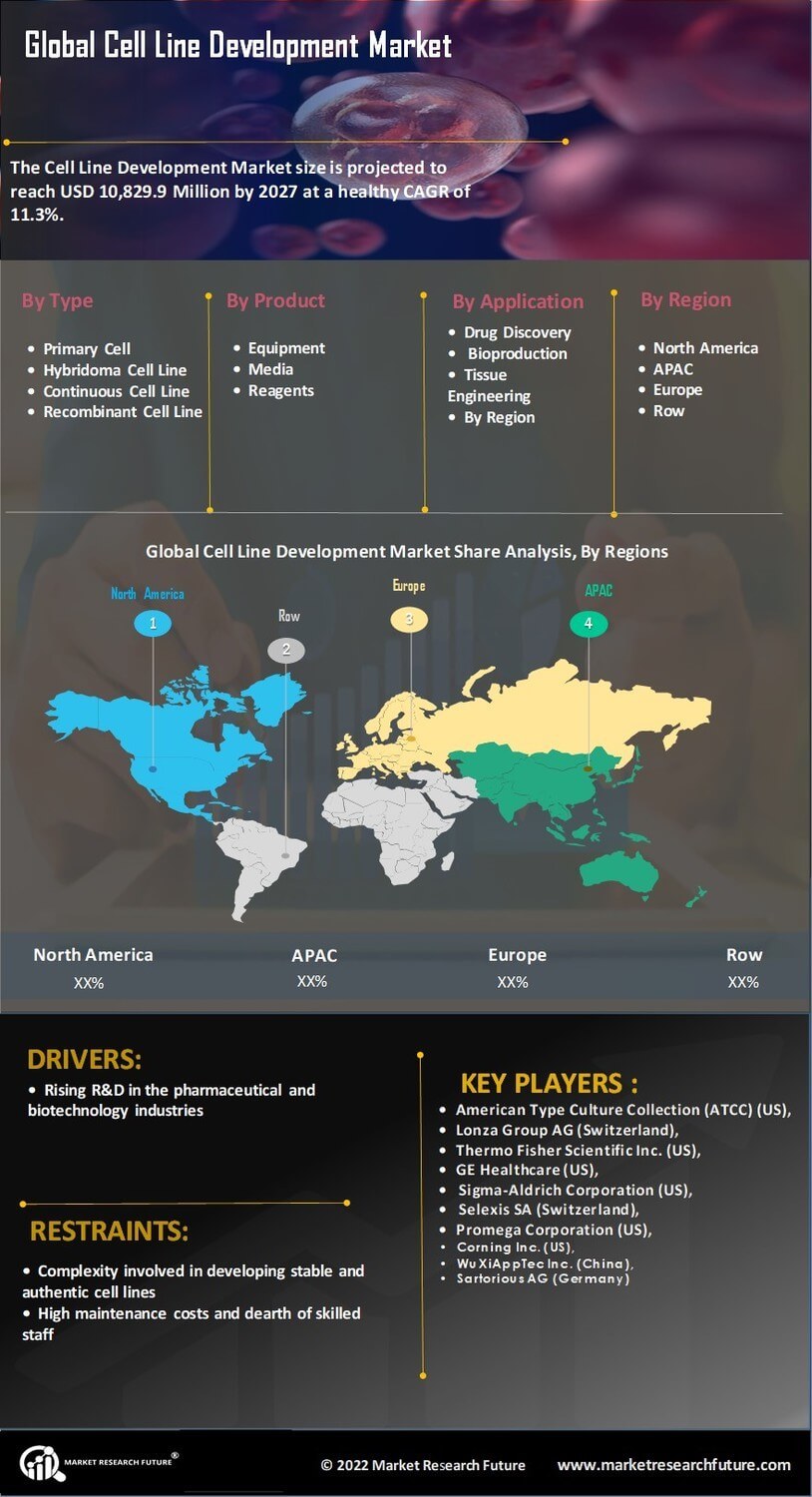 The Cell Line Development Market is expected to cross USD 6.07Billion in 2030at a CAGR of 10.10% during the forecast period

The cell line development market is expected to cross USD 6.07 Billion in 2030at a CAGR of 10.10% during the forecast period.

Cell Line Development (CLD) is a process that is being used for a variety of research and drug development and production application such as drug target identification and biologic drug production. The process begins by selecting host cells; the most commonly used host cells are Chinese Hamster Ovary (CHO)or HEK293 cells. The cell line development market growth can be attributed to the growing vaccine production globally, the developing biotechnology sector, and rising demand for monoclonal antibodies. However, there are pitfalls in the cell line development market, such as complex regulatory scenarios and stem cell research issues.

The rising prevalence of COVID-19 is projected to influence cell line development market growth over the forecast period. As the coronavirus outbreak continues, the majority of the pharmaceutical companies experienced a significant loss, thereby hampering the cell line development market. The COVID-19 pandemic has highly affected the economy across the globe; this severely impacts the production process and demand across numerous verticals and disrupts the supply chain.

Many companies halted their manufacturing and supply operations in the initial phase of the pandemic. However, the current situation of COVID-19 is expected to reach normalcy since the medical professionals and health authorities in the countries are taking the necessary steps to fight against the virus. Furthermore, pharmaceutical companies and research institutions worldwide have shifted their research activities in finding vaccine for COVID-19, thereby putting the development of other therapeutics on hold.


The increase in spending on healthcare research activity supports market growth. For instance, according to the US Department of Health and Human Services 2019, the National Institutes of Health spends USD 39.2 billion on medical research in the US. Moreover, according to the Pharmaceutical Research and Manufacturers Association (PhRMA), the biopharmaceutical business has a significant economic influence in the US. The total economic impact includes USD 558 billion in revenue from biopharmaceutical businesses and USD 659 billion from suppliers and worker spending. According to Research!America, a non-profit medical and health research advocacy alliance, in 2018, total estimated U.S. medical and health R&D expenditures accounted for about USD 194,175 million, of which USD 129,488 million was invested by the industry and USD 43,016 million by the federal government. Moreover, there was a 35.65% growth in the total expenditure between 2013 and 2018.

Companies with a global market presence, such as Pfizer (US), Novartis (Switzerland), Cellectis (France), and bioMérieux SA (France), are involved in the development of innovative cell therapy products. In recent years, owing to the increasing demand for cell therapy, several new technologies, including closed and automated production platforms, have been adopted, and several others are in development. Increasing research & development in the pharmaceutical and biotechnology industry to cater to rising needs for treatments of various chronic diseases has driven the growth of automated cell culture equipment. Such innovation is expected to be the critical driving factor for the cell line development market.


Developing stable and authentic cell lines involves highly complex techniques and substantial time and effort for generating stable cell lines. Hela is the first immortal cell line that was used in scientific research. The chances of contamination are higher as this line can grow over other cell lines and undergo mutation rapidly. Hence, the increasing cases of cell line mutation are likely to restrict the adoption of cell line development equipment.

The human cell lines used for the vaccine production include established animal cells, such as Vero, Madin Darby Canine Kidney (MDCK), or Chicken Embryo Fibroblasts (CEFs). These cell lines require proper maintenance as they grow and multiply at a very fast rate. The vaccines developed by using animal cells are used for the treatment of polio, rotavirus, smallpox, and Japanese encephalitis.

Thus, the complexity involved in developing a stable strain of cell line and maintaining and preventing it from contamination are factors restricting the growth of the global cell line development market during the forecast period.


The cell line development process is initiated via organs or tissues collected from mammalian or non-mammalian sources. The source of this process is a prerequisite for the development of stable cell lines for commercial purposes. Therefore, the rising adoption of mammalian sources for the production of antibodies and the increasing demand for expressing complex proteins similar to those expressed in human beings are anticipated to provide significant growth opportunities.

The cell line development process is initiated via organs or tissues collected from mammalians or non-mammalian sources. The source for this process is a prerequisite for the development of stable cell lines for commercial purposes. Therefore, the rising adoption of mammalian sourcesfor the production of monoclonal antibodies and the increasing demand for expressing complex proteins similar to human beings are anticipated to provide significant growth opportunities.


The primary cell line is expected to be the fastest-growing segment in 2020 due to its various applications in cell morphology, genetics, and cell metabolism. In the process of cell development, cells are extracted from normal, embryonic, and malignant tissues. These cells are propagated in vitro.


Hybridoma or (Chinese Hamster Ovary) CHO technology is used to create monoclonal antibodies. Hybrid cell ensures antibody production continuously in dividing cells. Increasing use of these hybrid cells for cell line development is driving the market growth. In addition, companies are also positioning themselves competitively in the cell line development landscape. For instance, in February 2017, GE Healthcare (US) entered a three-year collaboration with the Austrian Centre of Industrial Biotechnology to identify new techniques for optimizing CHO cell-line performance. The collaboration’s initial emphasis is on CHO cell-line growth and expression.


Continuous cell culture is part of a trend in bioprocessing toward highly productive, streamlined, and interconnected unit operations.Increasing adoption of these types of cell lines in biopharmaceutical industries is driving the cell line development market growth for this segment.


Based on the equipment, of global cell line development market is segmented into incubators, centrifuges, bioreactors, storage equipment, microscopes, and others. These equipment are majorly being used for the large-scale development of cell lines for various applications.


Mammalian cells held the major share in 2021. The key factor attributing to the growth of the cell line development market is the rising adoption of mammalian source for the production of monoclonal antibodies (mAbs). The necessity for expressing complex proteins similar to human beings is also expected to boost the adoption of this productin the coming years.


Based on the source of global cell line development, the non-mammalian segment is categorized into insects and amphibians. Protein therapeutics mAbs peptides and recombinant proteins represent the largest group of new products in development by the biopharmaceutical industry. These protein therapeutics are derived from non-mammalian sources for cell line development; this aids in boosting the growth of this segment.


Cell line development is a major step for assessing the efficiency of drug discovery, toxicity, and in vitro testing. The advantages of cell line development in this process include reduced time, effort, and cost, which minimizes the chance of research drugs failing at the clinical trial stage. This is attributing to the market growth of this segment.


The bioproduction segment held the largest share in 2020 due to factors such as the wide availability of cell lines for bioproduction, increasing number of antibiotics, and vaccine production. These factors are contributing to the growth of the market.


Tissue engineering is the construction of bioartificial tissues in vitro as well as within vivo methods of cell growth and function via implantation of suitable cells isolated from donor tissue and biocompatible scaffold materials. Increasing adoption of the cell line for tissue engineering is boosting the cell line development market growth during the forecast period.


Others include toxicity testing, regenerative medicine, etc. The increasing use of cell lines in these applications is driving the cell line development market growth.

The cell line development market has been segmented, on the basis of region, into North America, Europe, Asia-Pacific, and the Rest of the World. 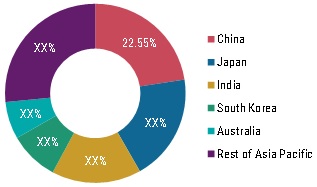 The key countries considered in the North American region include the US and Canada. The research laboratories across North America are increasingly modernizing their approach and using cell line development tools for antibody production, drug metabolism & cytotoxicity, tissue engineering, vaccine production, studying gene expression, production of therapeutic proteins, and other purposes. Moreover, the market in the region is driven by the increasing R&D in the pharmaceutical and biopharmaceutical industry, focusing on cell line development.

According to the National Institutes of Health (NIH), the federal spending on stem cell line research in 2018 was USD 1.58 billion. The American Type Culture Collection or ATCC (US) is a nonprofit organization that collects, stores, and distributes standard reference microorganisms, cell lines, and other materials for R&D. In October 2019, ATCC launched a new authentication service that helps researchers to confirm the identity of mouse cell lines easily. The service was developed in along with the National Institutes for Standards and Technology.

Asia-Pacific is anticipated to be the fastest-growing regional market over the assessment period due to rapidly improving healthcare infrastructure, increasing demand for monoclonal antibodies to treat various diseases such as myocardial disease and cancer, use of cell line for vaccine development by the companies, and government support in regulating biotechnology products in this region. The countries in the region are well versed with trained resources, favorable regulatory policies, cost-effective labor, and a large pool of patients suffering from several acute and chronic illnesses. The key countries considered in the Asia-Pacific region include China, India, Japan, South Korea, Australia, and the Rest of Asia-Pacific.

The cell line development market is profitable, both for existing players as well as new entrants. A substantial level of competitive rivalry is witnessed among the market players. The major players have adopted a strategy of obtaining regulatory approval from government agencies for their devices and signing contracts and agreements to broaden their reach and reduce operational costs. For instance, Thermo Fisher Scientific, Inc. launched the new Gibco Human Plasma-like Medium (HPLM), the first of its kind cell culture medium in the market. It mimics the metabolic profile of human plasma and is designed to help researchers see and understand a realistic view of cell growth inside the human body. In November 2020, WuXi Biologics and AC Immune, a Lausanne (Switzerland)-based clinical-stage biopharmaceutical company, expanded their partnership with a new agreement. With this agreement, the two companies aim to accelerate AC Immune’s Anti-TDP-43 antibodies into clinical development.

The study covers the existing short-term and long-term market effect, as well as helping decision-makers to draught short-term and long-term plans for businesses by region. The report covers major regions in North America, Europe, Asia-Pacific, and the Rest of the World. The report analyzes market drivers, restraints, opportunities, challenges, Porter’s Five Forces, Value Chain, and impact of COVID-19 on the market.

What is cell line development used for?

Cell line development (CLD) is a process that is being used for a variety of research and drug development and production application such as drug target identification and biologic drug production.

What is the valuation of the cell line development market?

What is the growth rate of the cell line development market?

cell line development market is expected to exhibit a strong 10.10% CAGR by 2030

What are the factors driving the cell line development market?

What is the leading regional cell line development market?

The market in North America accounted for the largest share in 2020 due to the presence of constant technological developments followed by new discoveries triggering the adoption of novel procedures for bioproduction.

Who are the major players in the cell line development market?

Rise in vaccine production by using cell line development process is expected to boost the growth...