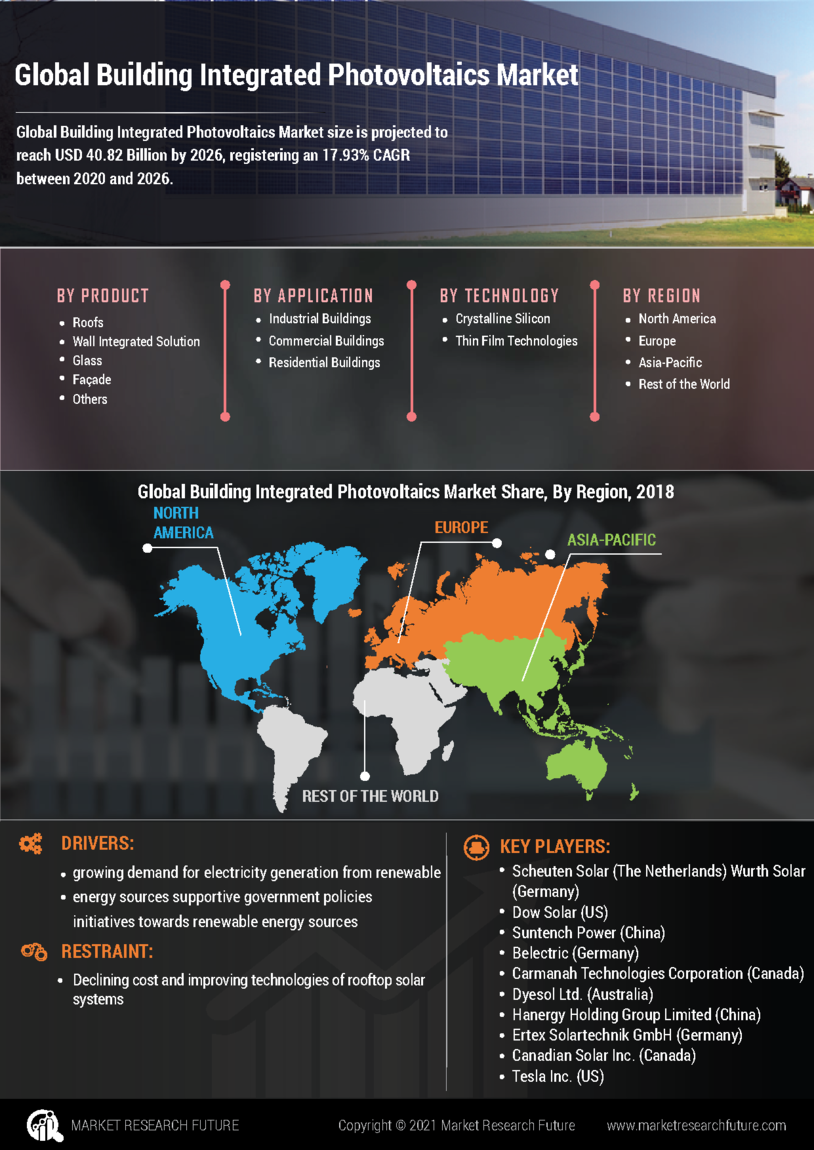 The global inclination towards renewables-based power generation is an enormous opportunity for the BIPV systems. The regional governments are planning to move towards renewables-oriented energy policies to reach their carbon neutrality goals. The industrial and commercial sectors are even incentivized to adopt cleaner energy generation methods.

National governments' growing efforts to instal solar energy panels are expected to boost the industry during the next seven years. The greater awareness of infrastructure development, particularly energy-efficient buildings, is projected to increase demand for Building Integrated Photovoltaics Market. BIPV is a long-term and cost-effective option for improving the structure's fuel efficiency, retrofitting the structure's façade, and offering considerable savings in conventional power usage. Furthermore, greater consumer conscious of the health benefits of BIPV has resulted in increased household adoption of solar energy harvesting systems. Aside from that, the introduction of favourable government regulations backed up by a number of efforts stressing the need to reduce carbon footprints has spurred worldwide demand for building-integrated photovoltaics market growth.

This report contains all the information on the global Building Integrated Photovoltaics Market value and strengths. The report also contains the culmination of dynamics, segmentation, key players, regional analysis, and other important factors. And a detailed analysis of the global Building Integrated Photovoltaics Market outlook and forecast for 2027 is also included in the report.

There is no market in the planet that has not been impacted by the present epidemic. The COVID-19 epidemic has affected several businesses, including the worldwide Building Integrated Photovoltaics industry. To battle the epidemic, the government and nations have implemented a number of severe measures, such as lockdowns and modifications to a few industrial regulations, to assist various enterprises in remaining competitive.

The rise in demand for building integrated photovoltaic materials can be attributed to the integration of solar energy solutions in commercial infrastructures for architectural optimization and energy conservation. Moreover, growth in environmental concerns toward depleting non-renewable power resources, such as oil and coal, further propel the demand for solar power generation. In addition, rapid modernization in the construction and building sector and an increase in focus on clean energy have led to a rise in demand for green or zero-emission buildings. According to the Fraunhofer Institute for Solar Energy Systems, Germany's global annual monocrystalline PV production share was around 80%, the highest among all other technologies. The percentage explicitly reflects the demand for the technology at the global level due to its low prices and technical maturity. Spanish BIPV systems manufacturer Onyx Solar started the construction of a giant BIPV solar facade to refurbish the Sterling Bank headquarters in Lagos, Nigeria. The company will install around 3,250 crystalline solar modules on the building facade.


The growing integration of solar energy solutions in commercial structures for architectural optimization and energy saving can be linked to the increased demand for building integrated photovoltaic materials. Furthermore, rising environmental worries about the depletion of non-renewable energy supplies such as oil, coal, and others have increased competition for solar power generation. Furthermore, a dramatic rise in the design and construction sectors, as well as an increased emphasis on clean energy, have driven demand for green or zero-emission structures.


Futuristic breakthroughs in mainstream solar and other related technologies are anticipated to increase investor trust in the industry, resulting in increased investment for R&D operations. Technology start-ups are likely to enter the market for developing integrated photovoltaics and use innovative and current technology with proven characteristics. Existing suppliers will continue to update their product portfolios. Thus, over the predicted period, new and efficient solar panels will provide opportunities.


One of the key constraints of the BIPV industry is the falling cost and increasing technology of rooftop solar PV, which is significantly faster than that of BIPV, resulting in the majority of customers preferring rooftop solar over BIPV.


The absence of uniformity in photovoltaic tiles is posing a challenge to the sharp growth in demand for BIPV roof solutions. Because of the slanting roof designs, the roof goods have a great potential in Major nations. Thin-film BIPV and facade applications, on the other hand, are more prevalent in APAC and MEA areas where the roof design is typically flat.

In recent years, the European Union, the United States, and other developed nations have moved their attention considerably toward net-zero-energy building design or construction (or nearly zero energy building). Furthermore, numerous goals and targets for implementing zero-energy buildings have either been declared or are being considered and suggested at the worldwide level. This, in turn, is projected to provide considerable future possibilities for BIPV technology vendors. Europe dominated the global market due to the region's clean energy ambitions and the lofty standards established to guarantee that all new buildings utilize very little net energy by 2020, giving rise to the term "nearly zero-energy building" or nZEB.

The global market for building integrated photovoltaics market has been divided into product, application, technology, and region segments. The worldwide market is segmented by product into roofing, wall integrated solutions, glass, façade, and others. During the projected period, the roof segment is predicted to have the highest building integrated photovoltaics market share. The glass category, on the other hand, is anticipated to develop at the quickest rate in the worldwide market. The global market is divided into three applications: industrial buildings, office properties, and housing developments. The industrial buildings sector is expected to expand at the quickest rate during the projected period, owing to the increasing use of solar systems to reduce reliance on non - renewable energy sources for power generation. The worldwide market has been split into crystalline silicon and thin-film technologies based on technology. The crystalline category is projected to account for a higher part of the worldwide market for constructing integrated photovoltaics.

According to the reports, on the basis of region, the market is divided into five regions: Asia-Pacific, North America, Europe, the Middle East, and Africa, and South America. Due to the cheap cost of production in countries like China and India, Asia-Pacific has the biggest building integrated photovoltaics market share. Furthermore, the market in Asia-Pacific is anticipated to expand at the highest rate during the study period, owing to a slew of government programs launched in the area to boost renewable energy installations. Europe is expected to maintain its lead in the global BIPV market in terms of installation, owing to an increased customer willingness to adopt practices as a result of progressively strict government regulations, as well as rising pressure to reduce net energy usage from buildings in order to reduce CO2 emissions.

Based on its new energy policy, the European Union wants to attain at least a 27 percent proportion of renewable energy consumption by 2030 and to have all new buildings be virtually zero energy buildings (NZEB) by 2020. The European BIPV market is in transition, and the regulatory framework is having a beneficial influence. The European Union (EU) established the Directive on Energy Usage in Buildings (EPBD) (Directive 2010/31/EU) and the Renewable Power Directive (1/77/EC), opening the path for near-zero and positive energy buildings.

To expand their worldwide footprint, industry participants are pursuing strategic initiatives such as new product development and mergers and acquisitions. Furthermore, industry participants are spending in research and development to lower the overall cost of BIPV installations. Local production is used by industry to provide local jobs, save transport costs, and reduce pollution. Because manufacturers are set up with end-users obtaining BIPV in large amounts, forward integration is projected to minimize firms' sensitivity to investment risk.

Solar PV panels with changing hues that can self-adjust to the amount of light and the temperature level of buildings with glass facades and huge windows were created by European experts from the Interdisciplinary Research Institute of Grenoble in June 2020.

Who are the prime players in the global building integrated photovoltaics market?

What is the growth rate predicted for the global building integrated photovoltaics market?

The global building integrated photovoltaics market is expected to enjoy a CAGR of 17.9% from 2022 to 2030.

What are the major drivers of the global building integrated photovoltaics market?

Generation of electricity from renewable sources, focus on reducing carbon emissions, and renovation of existing buildings are major drivers of the global building integrated photovoltaics market.

Which application can net high returns for the global building integrated photovoltaics market?

Which region can dominate the global building integrated photovoltaics market?

What is the estimated size of the global building integrated photovoltaics market?