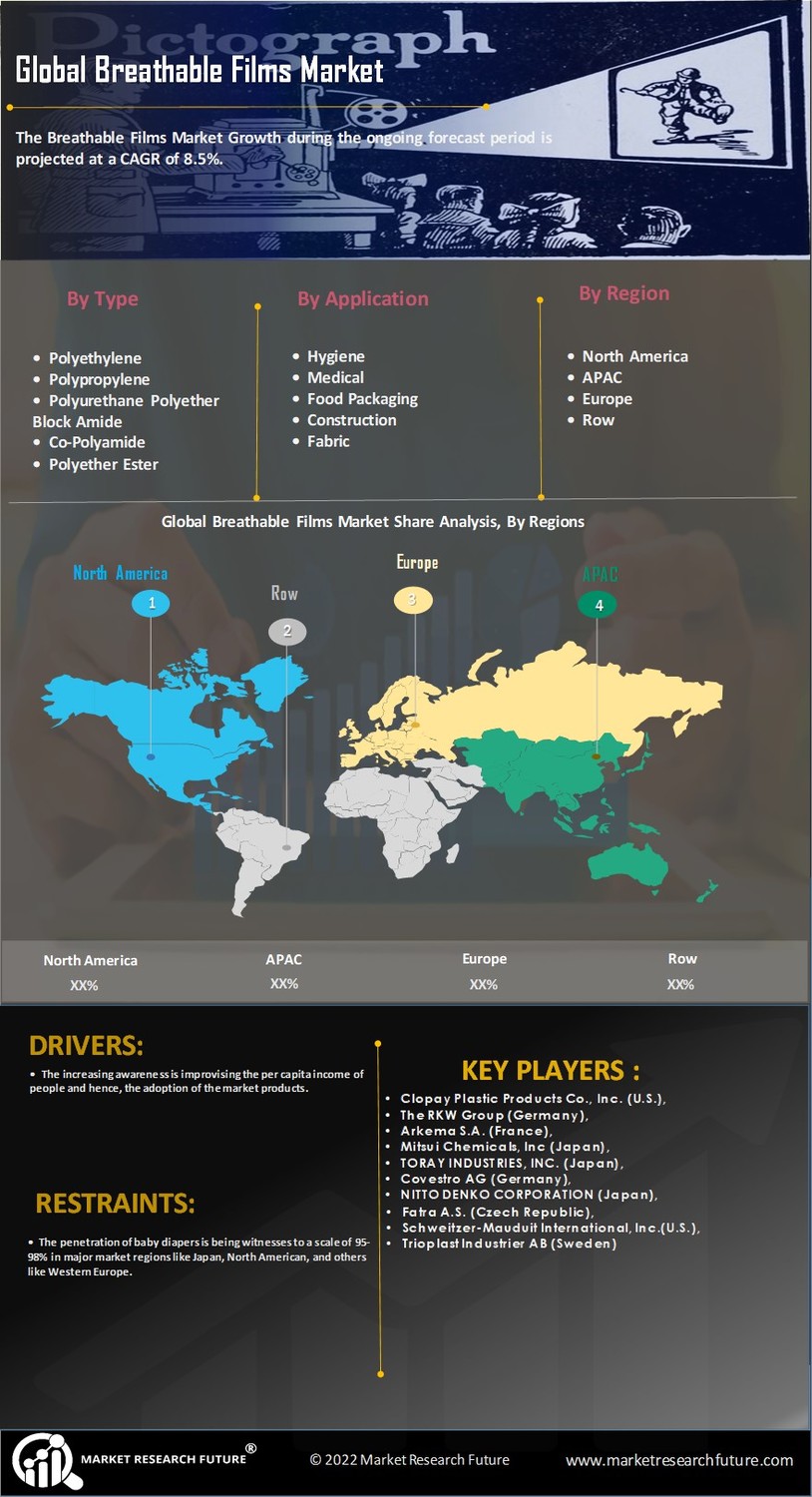 The Breathable Films Market Growth during the ongoing forecast period is projected at a CAGR of 8.5%. During the period, the market operations are expected to reach a final market valuation worth USD 4.2 billion by the end of the forecast period. During the historic period that ended in 2019, the market ended its operations by reaching a market valuation worth USD 7.5 billion.

The potential market experts and leaders suggest that the market operations have positive attributes in store owing to the pandemic and how trends related to a healthier lifestyle have kicked in amongst the target audience in various global locations.

During the forecast period, the experts predict that the rising awareness related to the hygiene and health of people is a benefit for the market. The people who have seen adverse effects of the COVID-19 pandemic are pushing the target audience to invest in healthcare services and hence, help in the expansion of the market operations worldwide. Also, the rising employment opportunities are increasing the purchasing power of people and hence, the Breathable-Films Market size is anticipated to grow during the forecast period.

Since the positive cases of coronavirus were reported, the demand for PPEs was high and was being catered by China. But when these kits failed the quality tests most of the countries including Indian began their local production. This is one of the factors that has helped the breathable-films market grow even during the pandemic and hence, the market recorded a growth rate of 7.3% and the market operations reached a valuation worth USD 2.6 billion during the pandemic.

Hygiene is witnessing a large momentum majorly in the developing regions in comparison to the developed countries like the North American players, alongside some like Japan, that belong to the APAC region. The cultural differences prevail and hence, there is an effect of the same on the consumers’ attitude towards these products. But the increasing awareness is improvising the per capita income of people and hence, the adoption of the market products and services is on the rise. tier-I cities are increasing at a significant rate and the developing countries have a propelling scope for the Breathable Films Market in the developing regions especially during the ongoing forecast period.

The penetration of baby diapers is being witnesses to a scale of 95-98% in major market regions like Japan, North American, and others like Western Europe. One of the major reasons that are backing this high penetration is that there is a very slow rate of growth of breathable films in the developed economies and hence, might present restraints for the Breathable Films Market on the way of its growth during the forecast period.

The countries that have a high rate of the population like India and China still have scope as the penetration level is low. The technological advancements are predicting that the demand is expected to grow as the purchasing power of people is increasing and the same is backed with an increase in awareness related to health and hygiene which impacts the consumer preference. Thus, the prospects for growth are higher during the current forecast period. 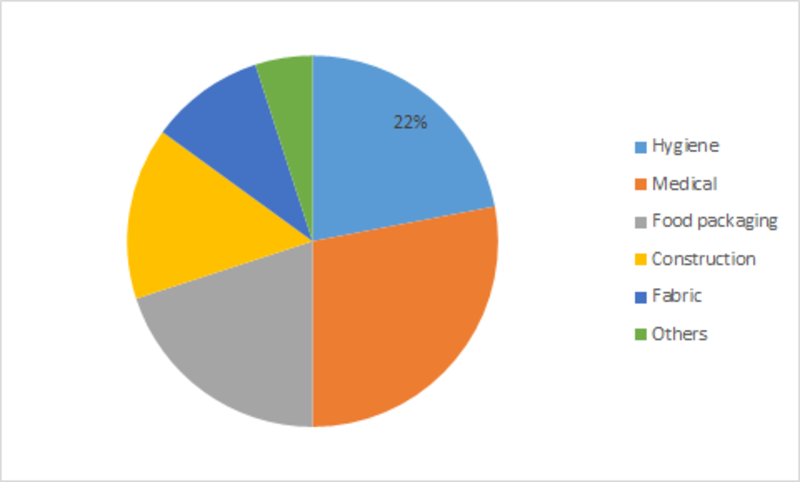 The Breathable Films Market has been divided all across the globe based on Type, Application, and Region.

The Breathable Films Market has been divided all across the globe based on the type into polyether ester, co-polyamide, polyurethane polyether block amide, polypropylene, polyethylene, and others.

The Breathable Films Market has been divided all across the globe based on the application into the fabric market, construction sector, food packaging industry, medical sector, hygiene sector, and others.

The Breathable Films Market has been divided all across the globe based on the region into North American region, Asia-Pacific region, European region, Latin American region, and the Middle East and African region. Being the fastest-growing region, the largest market share all across the globe is held by the Asia-Pacific region owing to increasing demand and consumption of these films in the food packaging industry, medical sector, and hygiene sector. The major portion is held by the medical sector and it is expected to dominate in this area during the review period as it has special features like lightweight, and adhesion.

The second-largest market share in the Breathable Films Market is held by the North American region owing to increasing demand for polyethylene in various end-user like sports sector, food packaging sector, and various sectors and hence drives the market demand in this regions. The presence of countries like the US, Canada, and Mexico is another driving factor.

The European region holds the third-largest market share in the Breathable Films Market due to increasing awareness and facilities in the healthcare sector that drives the market demand to this region. Increasing demand for breathable films in the food packaging industry, medical sector, hygiene sector creates more growth opportunities in this region.

The Latin American region and the Middle East and African region hold the least Breathable Films Market Share due to the presence of low infrastructure in both these regions. Low per capita disposable income is another contributing factor that restricts the market growth in these regions.

The Most Prominent Major Key Players in the Breathable Films Market all across the globe are mentioned below:

These major key Players use various strategies to sustain their market position in the Breathable Films Market in the global market by going for mergers, and acquisitions, by collaborating, setting up a new joint venture, establishing a partnership, developing a new product line, innovation in the existing product, developing a new production process, and many others to expand their customer base in the untapped market of the breathable films all across the globe.

This Breathable Films Market Research Report consists of the following elements mentioned below:

This Market Research Report contains factors that drive the growth of the Breathable Films Market in the global market along with the factors that restrict its growth in the global market. The technical analysis during the forecasted period is mentioned. The impact of COVID 19 on the Breathable Films Market all across the globe is mentioned. The future growth rate in the market during the forecasted period is estimated and mentioned.

What are breathable films made from?

Breathable films are made from a combination of a number of minerals, including calcium carbonate and various polymers.

Which is the leading material in the breathable films market?

Polyethylene holds the largest share in the global breathable films market due to its significant use in single-use products.

What is the leading end use of breathable films?

The leading end use application of breathable films is in the medical sector. Hygiene and food packaging applications are also likely to remain important over the forecast period.

What is the leading regional market for breathable films?

What are the leading players in the global breathable films market?