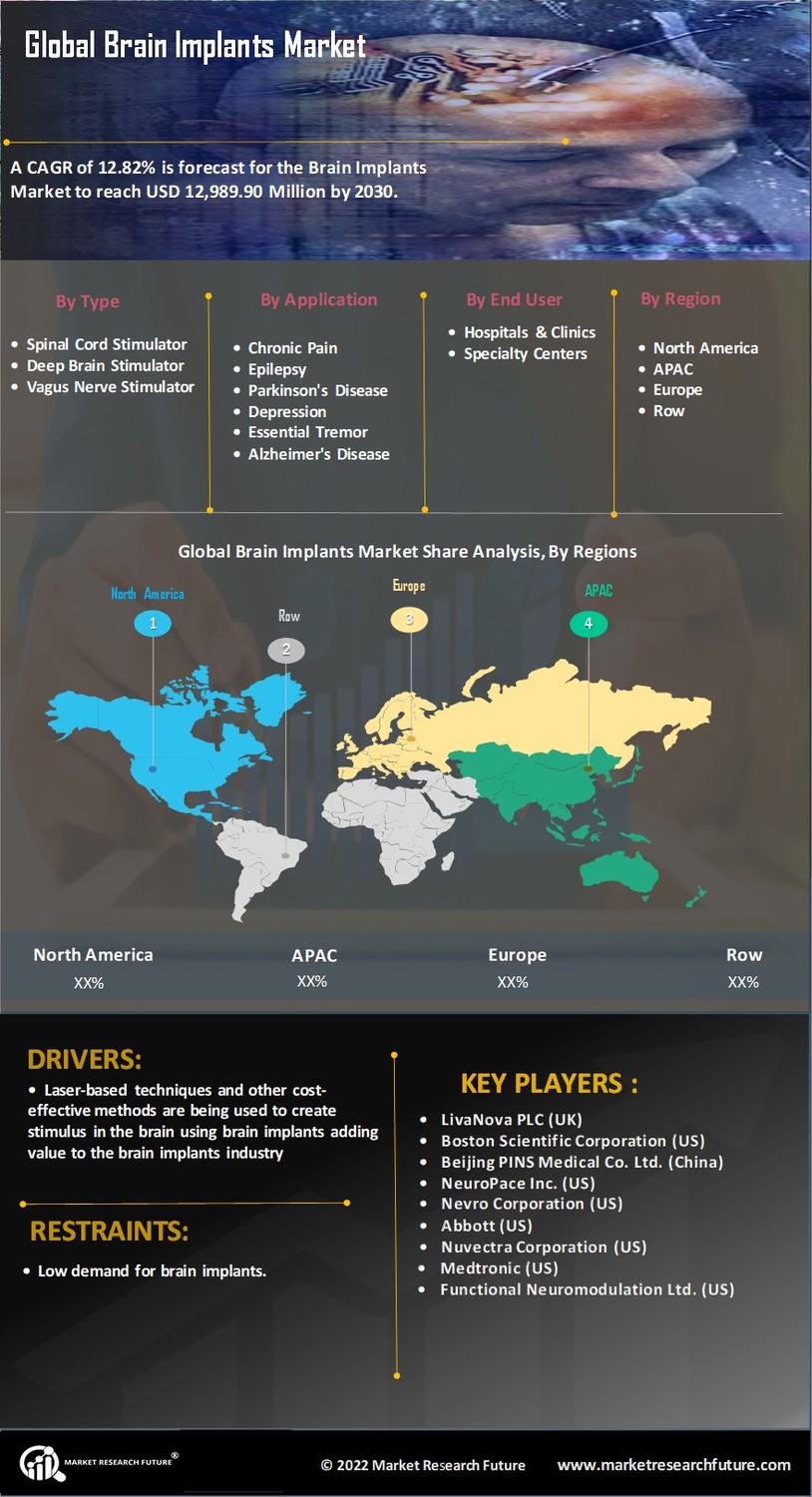 There are devices implanted in the human brain to cover up, stimulate, record, and reflex its five senses, such as wires, tubes, sensors, and other devices. These implants may be used to study the function of animal brains, and they are being studied in clinical trials for human brain activity analysis. Neurodegenerative diseases like Parkinson's disease and clinical depression may benefit from the use of various clinical trials that stimulate brain functions and calm the mind to treat them.

We have all been living unhealthy lifestyles over the last few years and anxiety and stress levels have risen day by day. Delayed stimulus actions, lost sense of taste, vision loss, color blindness, and other severe diseases are a result of neurological disorders that people are suffering from. There is a rise of brain implants on neuro disorders and the human brain study is becoming a topic of interest. In the 1980s, neurology was at the forefront of scientific advancement, and in 2023, more than 4.8 billion US dollars is supposed to be added by investing more than half a billion dollars in research.

COVID-19, an RNA-affecting virus that has affected geographically, economically, and politically the world since November of 2019, is witnessing an upward growth. The prognosis of this virus is very less even though the common symptoms are involved as the common cold. To make this virus work, the Governments imposed strict lockdowns all around the globe. With this pandemic, the world and private businesses have learned to work on necessities and essentials. During COVID-19 pandemics, the brain implant market grew as more doctors started using computer chips to analyze and record the brain activity of those affected. In some regions, doctors used brain chips to stimulate positive actions to build immunity in patients who were also affected by the virus and had mental breakdowns.

According to the WHO reports, The demand for public healthcare facilities has increased due to the increase in neurological disorders in humans. Since more than fifty million people are affected by Alzheimer's, fifty million with epilepsy treatment, and 75 million with Parkinson's disease; governments around the world have shown interest in funding clinical trials and hospital fanciful treatments that can potentially solve these neurological illnesses. As there is no predetermined age group affected by these diseases, securing future generations has become feasible. The brain implants industry is adding value by creating stimuli in the brain using laser-based techniques and other cost-effective methods. With the use of neural chips, actions in hands and fingers can be stimulated, as well as improvements in vision with chips.

In the 1980s with advanced neurotechnology, there was a boost in the brain implants market. The source of brain implant study is clinical depressions, paralysis, autism, and other neurological disorders. The cortex of the brain is implanted with neural chips that stimulate the brain's activities throughout the body. In case of brain damage, limb loss, paralysis, etc. to recover the motion sensors of the brain can be injected into the brain. When studying the brain with computers, scientists sometimes use chips to study brain activity in different contexts. With the ability to visually analyze brain activity while connected to neural chips, advancements in the brain implant market have been made with the use of visual stimulation. Brain implant’s market share has grown in part due to spinal cord stimulators which combine electronics with brain implants and stimulate vision impulses, body sensations, and reflexes.

Numerous neuron diseases are treated in the brain implants market based on application such as epilepsy, chronic brain pain, blood clots, Alzheimer’s aneurysms, tremor, clinical depression, Parkinson’s disease, etc. A major chunk of these chronic neuro illnesses do not even have a cure if the appropriate time to detect and cure the disease has crossed. It is only in case of a known issue that brain treatment and surgery are possible. Globally, due research and development and thorough clinical trials and experiments are ongoing to find solutions and track the effects of such brain issues.

Based on verticals, the brain implants market is divided into an end-user market that includes clinical trials centers, hospitals, local brain physicians. The brain implants market share is increasing and growing at a fast pace as companies have considered this market lucrative for investments in hospitals and clinics due to the increase in neuro disorders of all ages.

In addition to showing an interest in neuro research and development, the government has approved all of the healthcare clinics and hospitals resulting in higher brain implant market shares. When it comes to neuro treatments and clinical trials involving surgically implanted brains, Europe is no less than the United States when it comes to investors, hospitals, and government cooperation. Even in the Asia Pacific brain implants market, to fight against diseases such as Parkinson’s, epilepsy, Alzheimer’s, etc. countries like Japan, Africa, Middle East, and India have accepted the solution of brain implants. Exports and imports of brain implants are concentrated in China and India.

Because of the growing number of patients with neuro disorders, the governments of various market leaders (the United States, Europe, China, India, Japan, and Africa) in the brain implant industry have opened a lucrative market for the brain implant industry. The government's willingness to provide FDA approvals and fund healthcare departments researching neural networks and neurology is creating a strong market for the brain implant industry. LivaNova PLC (UK), Boston Scientific Corporation (US), Beijing PINS Medical Co. Ltd. (China), NeuroPace Inc. (US), Nevro Corporation (US), Abbott (US), Nuvectra Corporation (US), Medtronic (US), Functional Neuromodulation Ltd. (US), and others are among the valued key competitors in the brain implants industry. Neurology has advanced since the 1980s and is expected to add more than 4.8 billion US dollars in value by 2023 by investing more than 500,000 million US dollars in research. The Brain Implants Market Research Report predicts a CAGR of 11.7% by 2023.

In China, the BrainCom project is a world-recognized clinical trial that is associated with speech. Researchers study the stimulus created by the brain by attempting to create the intention of speaking. As part of an FDA-approved project, Boston Scientific Corporation has been working on a spinal cord stimulator. With the emergence of neuromodulation, St. Jude Medical (Abbott) increased investment in the market for brain implants by advancing neural chips in the year 2017. A new OCT spinal system from Medtronic (US) has proven successful in analyzing brain responses to challenging situations. There have been many cases in which neurosurgeons have performed open brain surgery on awake patients to remove an aneurism in deep brain cells without causing other senses to be lost.

As long-term chronic pains that sufferers from humans suffer, along with other neurological disorders such as epilepsy, Parkinson's, aneurysms, blood clots, and Alzheimer's disease, the brain implant industry has exploded since the late 1980s. Several healthcare centers such as clinics, specialty centers, and clinical trial centers have received government approval to conduct brain implant tests and find suitable solutions to these disorders. The United States, Europe (Germany, France), China, Japan, India are expanding their market strategies by acquiring healthcare centers and merging investors to advance neurology study. In the brain implant market, there is a wide array of academics and contracts.

At what CAGR is the brain implants market projected to grow during the forecast period?

Which region is expected to dominate the brain implants market?

The Americas are expected to dominate the brain implants market.

What will be the value of the brain implants market during the forecast period?

Who are the key competitors in the brain implants market?

Which factors may act as deterrents in the brain implants market?

Rising Neurological Disorders Coupled with Technological Advancements are Expected to Boost the G...