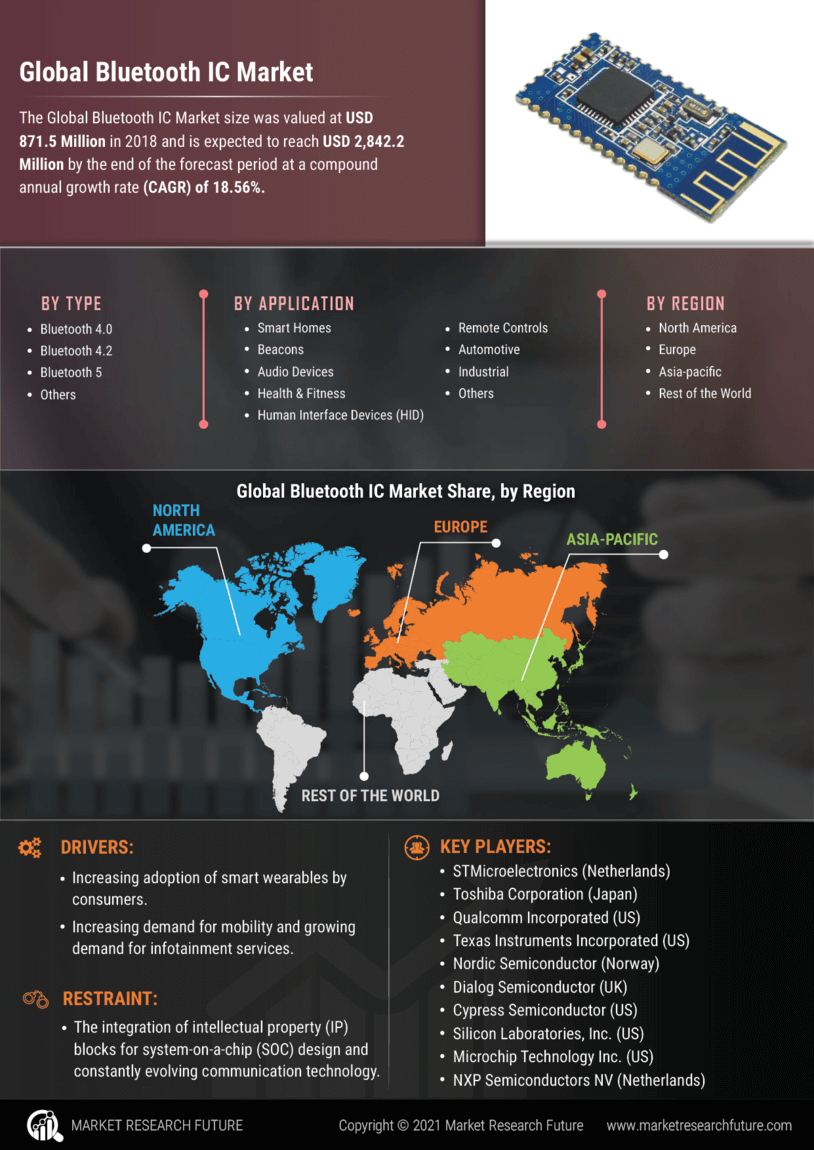 According to the reports, By the conclusion of the forecast year, the Bluetooth IC Market size was valued at USD 871.5 Million in 2018 and is expected to reach USD 2,842.2 Million by the end of the forecast period at a compound annual growth rate (CAGR) of 18.56%., a compound annual growth rate (CAGR) of 18.56 percent. Bluetooth is a defined protocol that allows data to be sent wirelessly over a communication system without the need of wires. It is a secure wireless transmission protocol that is intended for short-range, low-power, and low-cost wireless connectivity among electronic devices. The technique is one of the most commonly used low-power wireless communication technologies available on the market, and it is widely utilized by both consumers of wireless devices and developers of wireless devices. Technology has evolved significantly over the past 2 decades and is currently at Bluetooth 5 standard.

In communications systems, Bluetooth is a standardized protocol for wirelessly transferring data across a network of communication devices. In brief, it is a security method that is well suited for wireless communication between electrical devices over short distances with low power consumption and cheap cost. The technology is one of the most widely used low-power wireless technologies in the market, and it is highly favored by both consumers and producers of wireless devices and equipment. Bluetooth technology has advanced significantly over the last two decades, and it is now at Bluetooth version 5. Nodes in a Wifi network may communicate with one another by acting as transmitters for other nodes, resulting in an improved connection between nodes. As a result, the demand for Bluetooth integrated circuits in wireless gadgets has increased. In recent years, consumers have been more interested in smart wearables, which has resulted in an increase in demand for the worldwide Bluetooth IC market. Furthermore, the shrinking of integrated circuits (ICs) is anticipated to open up new possibilities in the worldwide industry. The incorporation of intellectual property (IP) blocks for system-on-a-chip (SOC) layout and the continuous evolution of communications technologies, on the other hand, may pose a threat to the market's expansion.

The ongoing COVID-19 problem has affected a number of companies, including the Bluetooth IC sector. This pandemic has led to temporary interruptions and social isolation, resulting in economic slowdowns, disturbances to the supply and demand chain, and closures of plants and industry.

A major element driving the market's expansion is the increasing usage of smart wearable electronic gadgets by consumers. A growing number of financial investments on Internet of Things-based digital systems, increasing supply for smart wearable networks, increasing supply for better internet communication in wireless devices, miniaturization of ICs, demand for high-performance Bluetooth ICs in audio products such as speakers and headphones, and an increasing number of Bluetooth ICs in applications in smart homes, automobiles, industrial, and consumer devices.

The growing and very well smartphone market, widespread consumer adoption of audio devices such as Bluetooth headphones, and a surge in the production of other electronic devices such as wireless rodents, keypads, and audio hardware are all contributing to the market's expansion across the region by creating lucrative opportunities for the key players, which is expected to continue.

Nevertheless, the potential of connection failure under certain circumstances, as well as the limited bandwidth of Bluetooth, are significant restraints on the market's development. Another factor that may impede market expansion is the merger of intellectual property (IP) blocks for system-on-a-chip (SOC) design and the ongoing development of wireless communication technologies.

The restricted bandwidth of Bluetooth is a major stumbling block to the growth of the industry.

Bluetooth 5 is the most current version of the Bluetooth wireless communication systems, and it was released in June 2012. Bluetooth ICs are often used in wireless audio devices such as headphones, speakers, and other audio hardware; however, they are also found in wireless mouse, gaming controllers, and keyboards, which are all contributing to the market's expansion.

The market is segmented on the basis of product, device type, end-use, and region. The global Bluetooth IC Market is expected to witness decent growth during the forecast period.

Based on the application, the market is segmented into smart homes; beacons; audio devices; health and fitness; human interface devices (HID); remote controls; automotive; industrial; and others.

According to the reports, on the basis of region, the global Bluetooth IC market is divided into North America, Europe, Asia Pacific, the middle east & Africa, and central & south America. In the projected period through 2019 to 2025, the worldwide market for Bluetooth integrated circuits (ICs) is expected to expand at an astounding pace. The regional study of the Bluetooth IC market share has been carried out for the following regions: North America, Europe, Asia-Pacific, the Middle East, and Africa, and Central and South America (North America). As a result of MRFR's research, the Sector led the worldwide market in 2018 and is expected to continue to do so throughout the projected period. The need for downsizing of integrated circuits (ICs) has prompted chip makers in China and Taiwan to include Bluetooth ICs into system-on-chips (SOCs). During the projection period of 2019–2025, the market in North America, on the other hand, is projected to see the quickest growth. Because of the widespread use of wireless devices, as well as the widespread deployment of building automation, the Bluetooth integrated circuit (IC) market in North America has seen rapid development.

Manufacturers in the worldwide Bluetooth IC market growth are mainly concerned with expanding their portfolio of Bluetooth ICs in order to maintain their competitiveness in the marketplace. In order to do this, these businesses have committed a substantial portion of their sales to research and development efforts. Additionally, the businesses are concentrating on the development of Bluetooth integrated circuits that are interoperable and extremely efficient for use in a variety of industries, including consumer electronics, aerospace, military, and telecommunications, among others. Additionally, as a part of their business model, these companies are pursuing inorganic growth strategies such as mergers, partnering, joint ventures, and collaborative partnerships in order to expand their geographic presence and gain a competitive advantage in the global Bluetooth IC market.

Earlier this year, Microchip announced the release of a Bluetooth 5.0-certified, dual-mode IC for audio applications. The IS2083 IC is equipped with a power amplifier and flash memory, allowing it to utilize Sony's LDAC (Low Data Rate) technology.

In February 2019, American Semiconductor Inc. introduced the AS NRF51822 FleX-BLE IC, which is a completely flexible and ultra-thin Bluetooth integrated circuit. It is a system-on-chip (SoC) that is packed at the chip-scale level and enables Bluetooth low energy (BLE) connectivity. It is made of a flexible semiconductor-on-polymer (SoP) chip.

What is the predicted market size of the global bluetooth IC market?

The global bluetooth IC market is poised to register a market value of USD 2.8 billion at a CAGR of approximately 18% over the review period (2019-2025).

What are the recent trends in the global bluetooth IC market?

The increasing demand for bluetooth IC form smart wearables manufacturers coupled with the integration of technological innovation, is creating opportunities for market players.

Which region has the largest market share in the global bluetooth IC market?

The North America region is accountable for the largest share of the market across the globe, followed by the Asia Pacific and Europe region. The U.S. and Canada are contributing substantially towards the North America market share.

What is the segmentation of the global bluetooth IC market?

The global bluetooth IC market is analyzed on the basis of product, device type, and end use, wherein the consumer electronics end-use segment is projected to witness maximum demand over the review period.

Who are the key players in the global bluetooth IC market?