The Global Automotive Tappet Market Size is expected to cross USD 10 Billion by 2027 at a CAGR of 4.55% during the forecast period ending in 2027

The global automotive tappet market is estimated to witness a 4.55% CAGR during the forecast period.

The factors that are responsible for the growth of the automotive tappet market are growing technology development, increasing sales of vehicle, growing number of consumer inclined towards the improved vehicle efficiency, among others. Use of advanced technology in the automotive industry have resulted in the increased demand for tappet in the vehicles. Various types of tappet have been developed in order to improve the efficiency of the vehicle, such as roller tappets enhance the overall output power of the vehicles. The growing production of passenger and commercial vehicles is expected to drive the growth of the tappet market in the future. The increasing production of vehicles is projected to result in growing demand for use of tappet, which will result in the growth of the market during the forecast period. The consumer are inclined towards high performance of the vehicles, which is expected to drive the demand for tappet.

The tappet pass-on the linear motion to some other components of the vehicle within a mechanism. It is widely used in internal combustion engine because it adjusts the overall clearance in the valve actuation system. It allows the camshaft to move vertically by the rotation in vertical motion of cam. Earlier, the traditional tappet had a roller that was used to reduce the wear from the rotation of camshaft. Nowadays, the tappet is developed with plain flat ends in order to reduce the wear from rotating. Hydraulic tappet has a small hydraulic piston attached, which is pressurized by the lubrication of the engine. The rotation of tappet reduces the overall wear that is caused by the contact of the cam. It also improves the lubrication of two surfaces and increases the life of tappet. There are various types of tappet used in a vehicle, such as flat and roller tappet. There capacity depends on the type of engine installed in the vehicle. Tappets come in various engine capacity ranging from less than 4 cylinders, 4-6 cylinders, and more than 6 cylinders. The adjustment of tappet is made by turning a screw set at the end of the rockers that is pressed along the pushrod. This adjustment is made by rotating the engine until the cam is set to the lowest point. This will increase the capability of the tappet. Moreover, tappet increases the efficiency, output power, and performance of the vehicle. 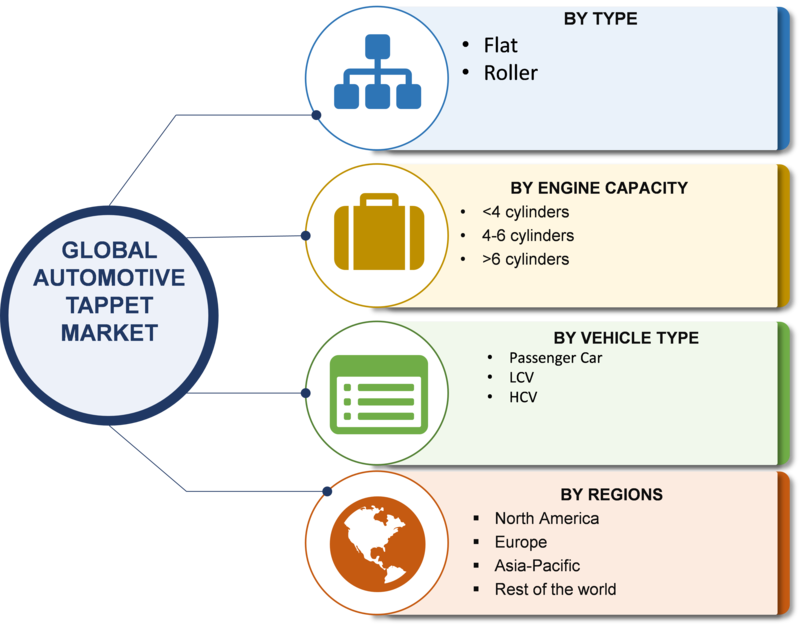 The market value by the end of the review timeframe can be enormous, thanks to the increasing investment by OEM manufacturers and the booming automotive industry around the world.

What are the types of vehicles that use the tappet?

Flat and roller are the types of vehicles that use the tappet.

Which are the leading countries in the APAC market?

Japan, China and India are the leading countries in the APAC market.

Automotive Tappet Market is predicted to grow at approximately 4.55% CAGR by 2027