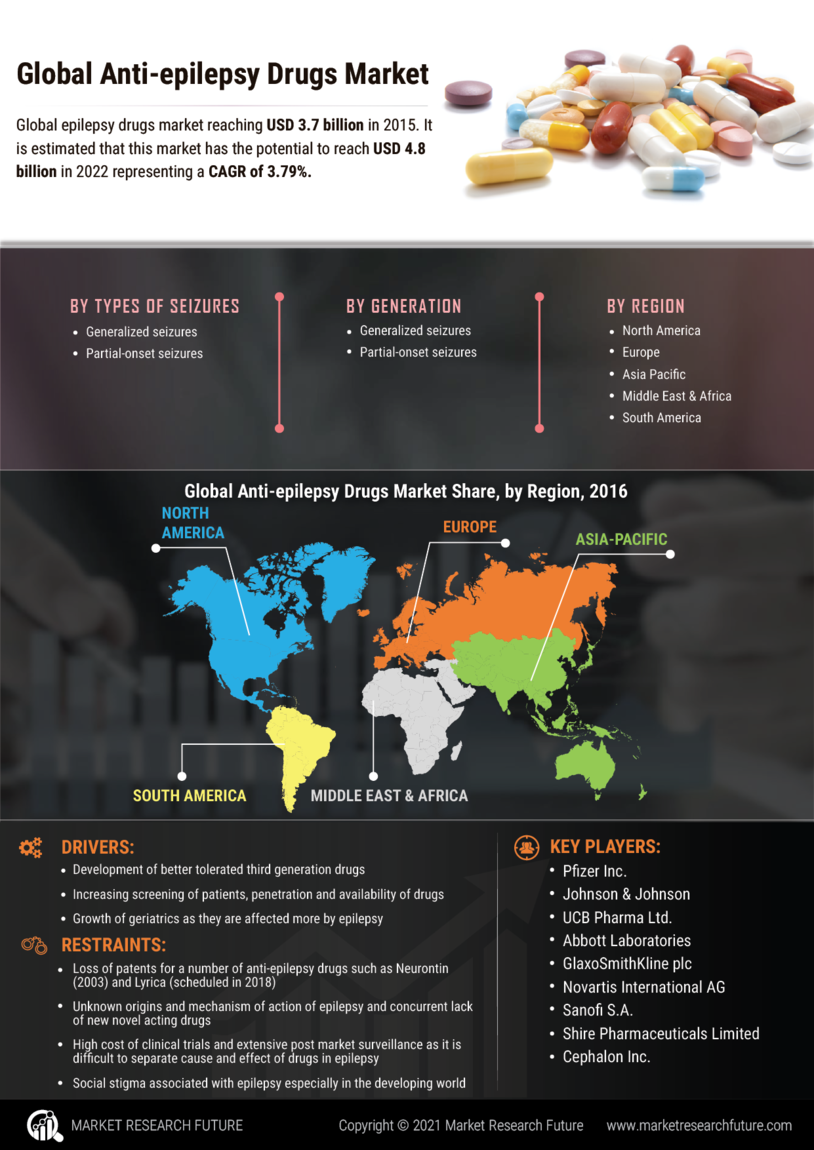 Antiepilepsy drugs market size is projected to reach a final market value worth USD 4.8 billion at a CAGR of 3.30% in the forecast period 2022-2030

The antiepilepsy drugs market size is projected to reach a final market value worth USD 4.8 billion at a CAGR of 3.30% in the forecast period 2022-2030. Anti-epileptic drugs, as a prominent market inclusion, are prescribed for patients who are adversely suffering from seizures. The major symptom that is related to epilepsy is repeated seizures, which are known as sudden bursts of electrical activity in the brain, and that there is an inclusion of the temporarily affects the functioning of the brain. Some seizures that appear cause the body to jerk and shake, while others are likely to cause many problems such as loss of awareness or unusual sensations. Anti-epileptic drugs that are known as AEDs include a diverse class of solutions like medications that are increasingly being used for different conditions apart from epilepsy such as migraine prophylaxis, and others like neuropathic pain, and bipolar disorder.

The sudden outbreak of the coronavirus pandemic and its facilities has imposed the global governments to impose lockdowns in various countries across the globe that have impacted the financial status of business across all sectors. The private healthcare sector of the antiepilepsy drugs market is emerging as one of the sectors which have been majorly impacted by the outbreak of the COVID-19 pandemic. The imposed lockdown in various countries due to the COVID-19 pandemic has created an economic rift and burden on the functioning of the private healthcare sector. According to the Indian Journal of Medical Sciences published a report in 2020, the outbreak of the COVID-19 pandemic has affected the conduction of clinical trials of vaccine and medicine due to the unavailability of trial site staff, followed by the restrictions imposed for traveling, investigational product availability, and many others.

According to the information circulated by the National Center for Biotechnology Information (NCBI) in its published report on April 29, 2020, many clinical trials suspended the trial enrollment, and aim to minimize the risk of contracting COVID-19. This act has led to cause a delay in the activation of a new clinical trial. Moreover, many companies have already reported having missed the follow-up for the patients already in the middle of the trials. Product development has experienced disruptions to focus on the adjustments to remote-work environments and lab capacity has also apparently reduced. The process of the clinical trials is also being severely affected with disruptions in both new enrollments and in keeping the existing patients on therapies. According to the information stated by clinicaltrial.gov, as of April 2020, there were more than 2,850 trials conducted and approximately 900,000 patients enrolled at trial sites in various regions and especially the ones that were in partial or complete lockdown due to COVID-19 restrictions. While the research and development, labs are currently operating at below 50% of the normal capacity across the globe.

There are many factors that are assisting the market growth during the forecast period. including the rising number of collaborations by key players in the antiepilepsy drugs market. For instance, in May 2021, Epilepsy Foundation, which is a U.S.-based non-profit national foundation, entered into a collaboration with another prominent player - Eisai Inc., which is a Japanese pharmaceutical company, for the development of the Epilepsy Digital Experience Navigator (EDEN). It is a platform designed to empower people with epilepsy, their caregivers, as well as, clinicians, to use data to better understand and improve the epilepsy journey.

However, the global growth of the antiepilepsy drugs market is expected to be hampered over the forecast period that will be ending in 2027, owing to the adoption of alternative treatments for children with epilepsy. Complementary and alternative medicine (CAM), which include the ketogenic diet, modified Atkins diet (MAD), followed by the low glycemic index treatment (LGIT) that are widely used for the treatment of epilepsy among children, in addition to the use of AEDs. For instance, according to the Clinical Nutrition Research which is a research study conducted to examine the consumption of nutritional supplements used in various treatments in 2016, as a part of the historic forecast period that had ended in 2018, around 30% of the children suffering from uncontrolled epileptic seizures were untreated worldwide, where a ketogenic diet (KD) could be potentially used in the form of an alternative medical treatment for these children, these factors are expected to restrain the global antiepilepsy drugs market growth for the forecast period.

Furthermore, there are prominent steps undertaken by the market key players followed by the fact that they are focused on gaining approvals from regulatory bodies, this is expected to drive the growth of the antiepilepsy drugs market based on the projections for the ongoing forecast period. For instance, in July 2019, a prominent market company - Pfizer, Inc. had announced the approval of the U.S Food and Drug Administration for the first generics of Lyrica (pregabalin) as adjunctive therapy for the treatment of partial-onset seizures in patients that belong to the age group of 17 years of age and older.

The antiepilepsy drugs market share is segmented to meet the rising needs of the global target audience.

Based on the drug type

The drug type segment is segmented into two broad categories, namely first and second-generation antiepileptic drugs. Phenytoin, carbamazepine, oxcarbazepine, and valproate are a part of the first generation class, and it dominates the overall antiepilepsy drugs market. From the second-generation drugs, some inclusions are zonisamide, levetiracetam, and lacosamide. These are gaining immense popularity due to their tolerability and high efficacy.

Based on the region

The United States is expected to emerge as the largest epilepsy drug market owing to the presence of better healthcare infrastructure followed by the rising cases of epilepsy. As per the Epilepsy Foundation of Michigan, epilepsy is known as the fourth most common neurological disorder in the United States after migraine, stroke, and Alzheimer’s disease. About one percent of the total number of Americans have some form of epilepsy and nearly four percent of that 1 in every 26 will develop epilepsy at some point in their lives. The number of Americans who have epilepsy is greater than the number who have multiple sclerosis, and other problems like Parkinson’s disease and cerebral palsy combined. Thus, there is a rising demand for effective treatment in the US region which is expected to boost the growth of the epilepsy drug market.

Furthermore, there are various organizations that are functioning and making awareness about epilepsy in the United States.

The key players operating in the global anti-epileptic drugs market are:

The rise in the generic competition for antiepileptics is due to the patent expiration of major brands and in the future, it is likely to be responsible for down pricing of branded drugs.

Lyrica was known to be the largest selling antiepileptic brand owing to its highly efficacious nature. Others like Retigabine and perampanel are recently approved antiepileptics, which act through new molecular targets.

The global antiepilepsy market report has been prepared to provide proper market insights followed by the dynamics that have a hand at depicting the growth and revenue scale of the global market for the ongoing forecast period. The report helps to form decisions of the market investors and also, understand the rising competition amongst the market segments and players functional in different parts across the participating regions, globally.

At what CAGR is the antiepilepsy drugs market projected to grow in the forecast period (2022-2030)?

The antiepilepsy drugs market is projected grow at approximately 3.30% CAGR during the assessment period (2022-2030).

How much is the antiepilepsy drugs market worth in the future?

The valuation of the Antiepilepsy drugs market is estimated to increase to USD 4.8 BN by the end of 2030.

What are the major tailwinds pushing the growth of the antiepilepsy drugs market?

Rising per capita healthcare expenditure and increasing R&D for the therapeutic procedures of the condition are major drivers of the antiepilepsy drugs market.

Which region holds the largest share in the antiepilepsy drugs market?

North America holds the largest share in the antiepilepsy drugs market, followed by Europe and the Asia Pacific, respectively.

Who are the top players in the antiepilepsy drugs market?