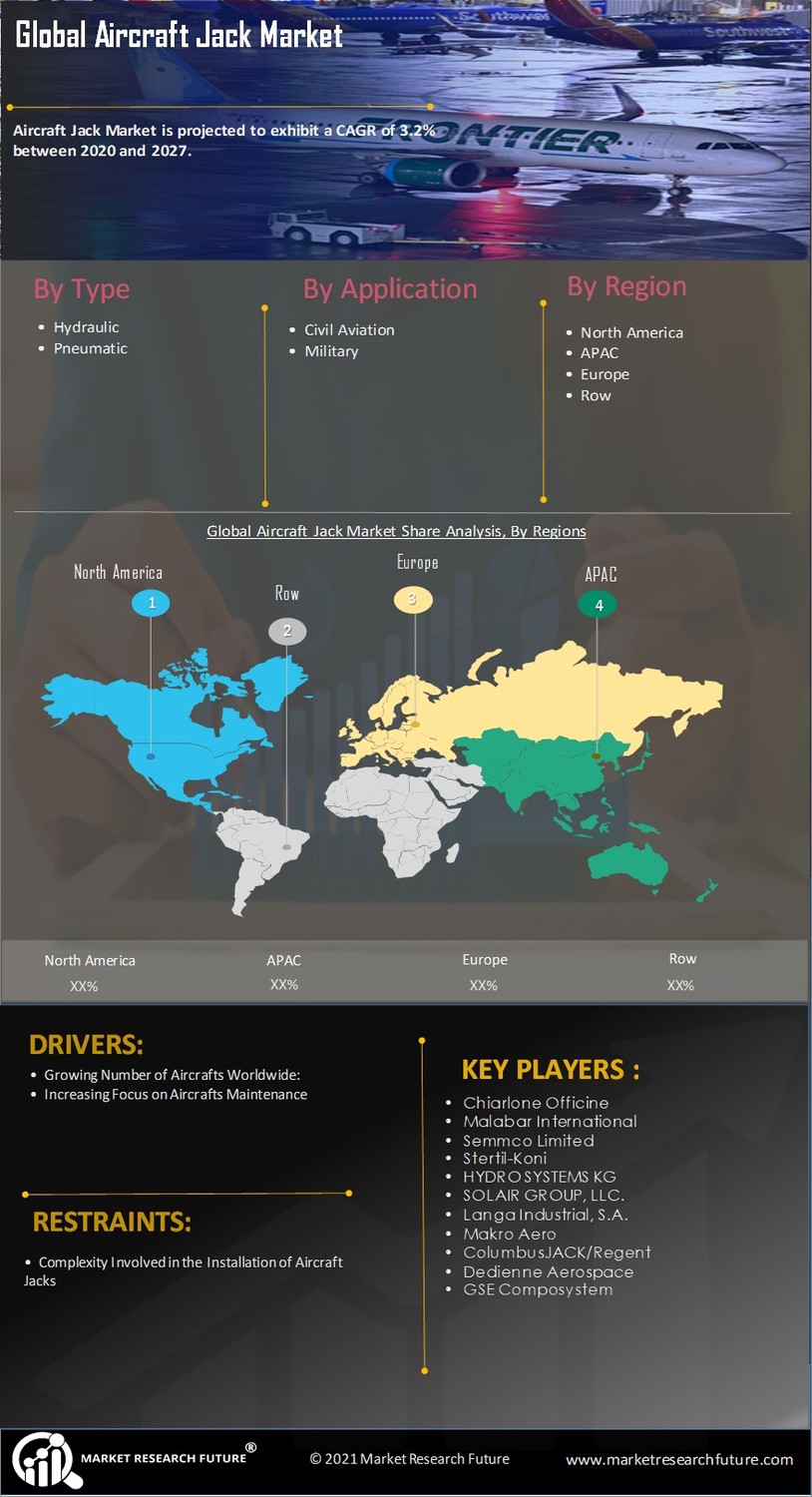 However, the complexity involved in the installation is projected to restrain the Aircraft Jack Market growth over the forecast duration. Jacking and safety procedures vary depending on the aircraft. Factors such as using jacks in A level position, use of proper jacking points, and the need for stabilizers make the installation of jacks a complex process.

The adverse impact of COVID-19 on the aerospace and defense sector is likely to halt the progress of Aircraft Jack Market over the next few years.

The aviation industry has witnessed an unprecedented decline in the last year due to the COVID-19 pandemic. The outbreak of the virus has significantly impacted airline companies. The average number of flights per day in March 2020 was 145,000, which is 17.61% lower than that of 176,000 in March 2019. Moreover, after several governments worldwide announced restrictions on air travel, commercial air traffic registered a 41% decrease compared to the 2019 levels in the last two weeks of March.

Due to this drastic decrease in air passenger traffic globally, the revenues of airline companies are expected to decrease in 2020 and 2021. According to the International Air Transport Association (IATA), the COVID-19 crisis reduced airline passenger revenues by USD 314 billion in 2020, a 55% decline compared to the revenue recorded in 2019. This is also expected to decrease the demand for new aircraft by the airline companies during this year. Moreover, there will be delays in aircraft deliveries by aircraft manufacturers such as Airbus SAS and Boeing. Thus, delay aircraft delivery and a decrease in aircraft operation are reducing the demand for aircraft jack.

Government support is expected to play a vital role in the recovery of airlines and Original Equipment Manufacturers (OEMs). As estimated by the International Air Transport Association (IATA), the industry needs USD 200 billion cash infusion and loan guarantees to come out of the pandemic effect. Furthermore, the government stimulus package to revive the economy is projected to have a positive impact on the industry. For example, the US introduced Coronavirus Aid, Relief, and Economic Security Act (CARES Act) to provide USD 2.2 trillion economic stimuli. Thus, increasing purchasing power would result in an increase in air travel, which, in turn, is anticipated to drive the demand for aircraft maintenance.

Key players operating in the aircraft jack market are:

How Big Is The Aircraft Jack Market Is ?

May 2020- Stertil-Koni introduced its heavy-duty shop equipment line that includeshydraulic commercial Aircraft Jack Market for main landing and nose gear with a load capacity of 143,000lbs. and 55,000 lbs.

In Which Region Aircraft Jack Market Having Highest Share ?

North America dominates the aircraft jackmarket. This trend is projected to continue during the forecast period

Growing Demand for Aerospace &amp; Defense Across the Globe is Expected to Boost the Demand for A...