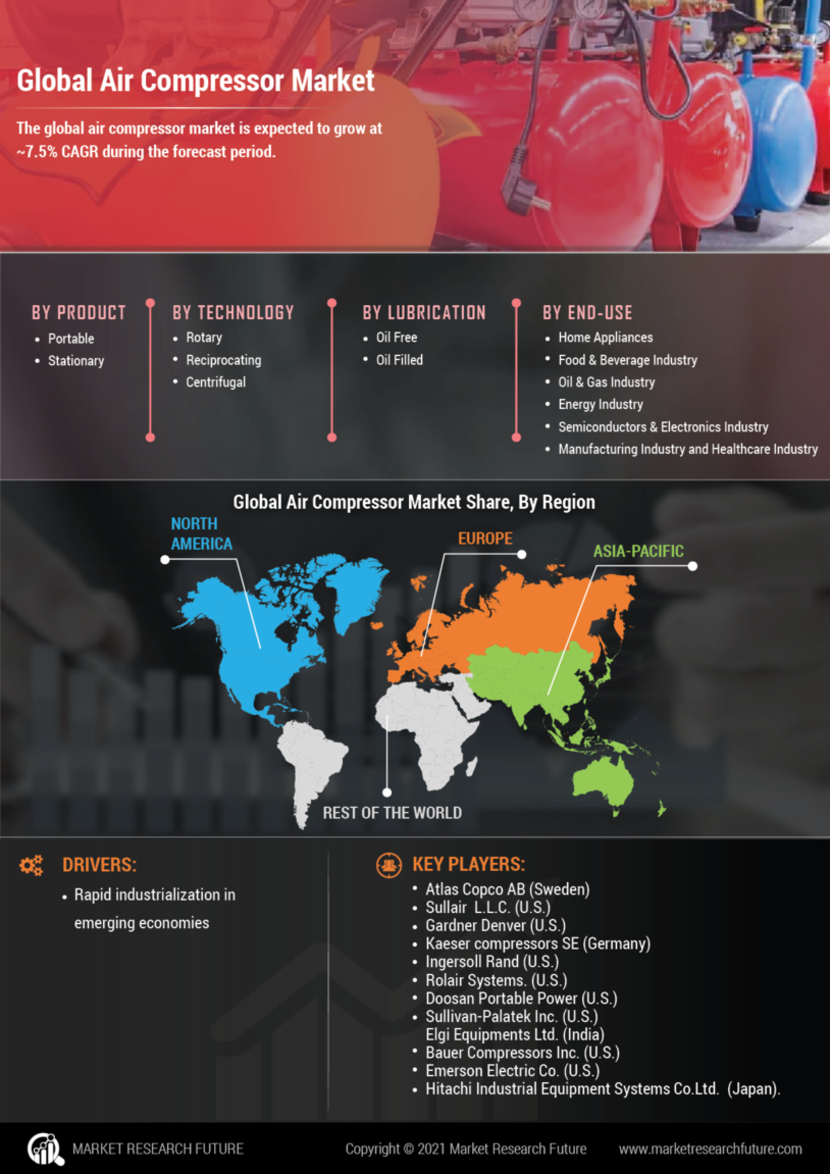 Air compressor market is expected to grow at ~7.5% CAGR during the forecast period.

Global air compressor market has witnessed gradual growth in recent years, and is expected to witness phenomenal growth in the forecast period. An air compressor is a device that converts power generated through electric motor, diesel or gasoline engine into potential energy and stores in a form of pressurized air, i.e., compressed air. This conversion is achieved by compressing the air present within, which is released on quick bursts. Some of the most commonly used methods of air compressor are negative displacement, and positive displacement technologies.

Rapid industrialization in emerging economies, is the prime driving factor for the global air compressor market. The advent of energy efficient models of air compressors, which are also available in portable designs, has extensively been adopted by industries across the world. The recent technology promises substantial reduction in maintenance costs, which is why it is received by a large number of consumers, hailing from diverse industrial backgrounds. However, for those who are stuck with more conventional models are continuing to deal with noisy operations of oil-free compressors and lubrication concerns in oiled air compressors.

Industrial development, since the past several years, post-recession, has ensued in the increased income levels in the developing regions. Subsequently, population, in major countries across the globe, is also on the rise. This had led to increasing surplus income, which in turn, fuels the demand for various daily use and comfort goods. Increasing income levels, coupled with the ability and willingness to by home appliances, result in newer and compact models paired with user friendly modes of operation. This will further improve the air compressor market.

Air compressor industry is expected to have a large number of advancements over the forecast period, owing to continuous developments in end-use industries and the growing disposable income. The market is also expected to have expansion activities by multinationals and well-established companies.

The global air compressor market is expected to witness phenomenal growth during the forecast period. This is due to the considerable growth in utilization of air compressors in numerous end-use applications across major industries. The growth is, primarily, attributed to the growing necessity of compression of air & gas, which is likely to continue during the forecast years. The Asia Pacific region accounted for the largest share of the air compressor market in 2016, wherein China, India, Japan and other prominent emerging economies countries contributed major share. However, Europe is likely to emerge as one of the prominent markets for this technology due to the deployment of advanced air compressor in the newly built home appliances.

What is the primary driving factor of the global air compressor market?

The global air compressor market is expected to reach significant growth due to the increasing usage and application of air compressors in several industries.

What is the estimated growth rate of the global air compressor market?

The global air compressor market is projected to register a moderate 7.5% CAGR in the forecast period.

What is the lubrication segment of the global air compressor market expected to witness the highest growth?

The oil-free segment is slated to expand as the fastest-growing segment.

Which is the leading end-use segment of the global air compressor market?

The home appliance industry is expected to witness considerable growth.

Who are the key players operative in the global air compressor market?

What are the 3 types of compressors?

The three most common air compressors are the reciprocating, rotary screw and centrifugal.