Please note that the assessment period of report has been updated from 2019-2025 to 2022-2030. Cordially fill the sample form for updated data and TOC.

Traction Transformer Market is Expected to Showcase Rampant Growth Over 2030 :

The various developments in transport systems buses, trains, cars, and motorbikes could be used for public commute. However, in recent years due to the increasing awareness among people about climate change and growing pollution levels, commuters are choosing public transport over private transport. Since the International Union of Railways specified that trains are 2 to 5 times more energy-efficient than road, inland shipping, and aviation, it is one of the most popular means for passenger commute. Furthermore, intracity public transport, especially the metro enables faster rides compared to buses and cars. Additionally, metros are much safer for as they run on specified routes, eliminating the risk of accidents. Such factors increase the demand for metros in major cities across the world. For instance, the Indian government is introducing intracity metro services in the cities including Pune, Coimbatore, Surat, Kanpur, Patna, and Guwahati to reduce traffic congestions and improve public transport. Most of these railway networks are expected to be operational by 2025. Such growth of metro transit is expected to drive the demand for the global traction transformer market during the forecast period, as such infrastructures are supported by electricity. 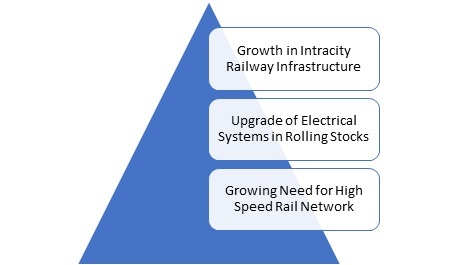 By region, the market is segmented as Europe, North America, Asia-Pacific, South America, and the Middle East & Africa. Asia-Pacific dominates the global traction transformer market. Asia-Pacific is one of the prominent regions in the world, is expected to witness increased demand for public transport with the increase in population and the technological advancement in transport & infrastructure industry, which is expected to lead to the growth of the traction transformer market in the region.

China is the most populated country, is the fastest growing economy in the world. Due to the rapid urbanization and developments in China, the energy demand requirement and the electrification of railways are increasing. According to the World Bank, China has the world’s highest high-speed rail network, with the rapid growth of urbanization and economic development in the country. Further, the increase in demand for public transport infrastructure and the development in the rolling stock infrastructure are expected to drive the demand of the traction transformer market in India. With the developments in the railway infrastructure, the Indian government plans to attract players for the upgrade of rolling stocks in the country.

This study provides an overview of the global traction transformer market, tracking four market segments across five geographic regions. The report studies key players, providing a four-year annual trend analysis that highlights market size, and share for North America, Europe, Asia-Pacific, Middle East, and South America. The report also provides a forecast, focusing on the market opportunities for the next five years for each region. The scope of the study segments the global traction transformer market by power rating, portability, end-use, and region.