Global Smoke Grenade Market is estimated to witness a CAGR of approximately 5% by the year 2023 :

Pune, India, December, 2018 /MRFR Press Release/- Market research future published a half-cooked research report on the global smoke grenade market. The smoke grenade market is estimated to witness a CAGR of approximately 5% during the forecast period from 2018 to 2023.

Smoke grenades are designed specially to screen, signal, start fires, control riots, and destroy equipment. They are used for short distance purposes and have 4-5 seconds fire delay, which allows the soldier to deploy the grenade safely. Smoke grenades produce a larger amount of smoke as compared to normal smoke bombs. The prime factor leading to the growth in smoke grenade market is the increasing utilization of smoke grenades in riot controls in various countries across the globe. Additionally, these grenades are easily available and cost less, which further increases the market demand. The factors that drive the smoke grenades market are increase in naval and army operations, crowd control measures and rise in internal violence.

In terms of region, the global smoke grenade market is segmented into North America, Europe, Asia-Pacific, the Middle East & Africa, and Latin America. North America hold major market share during the forecast period. The extensive use of smoke grenades by the law enforcement agencies to riot control increases the demand for the market in his region. Moreover, key players such as Combined Systems, Safariland, LLC, and Enola Gaye are based in the region, resulting in a higer market share for the region. Europe is leading region due to growing demand for the use of non-lethal weapons in UK, France, and Russia. Asia-Pacific is expected to be the fastest growing market during the forecast period. The growth can be attributed to immense demand for smoke grenade in India and China due to increase in riots and protests. 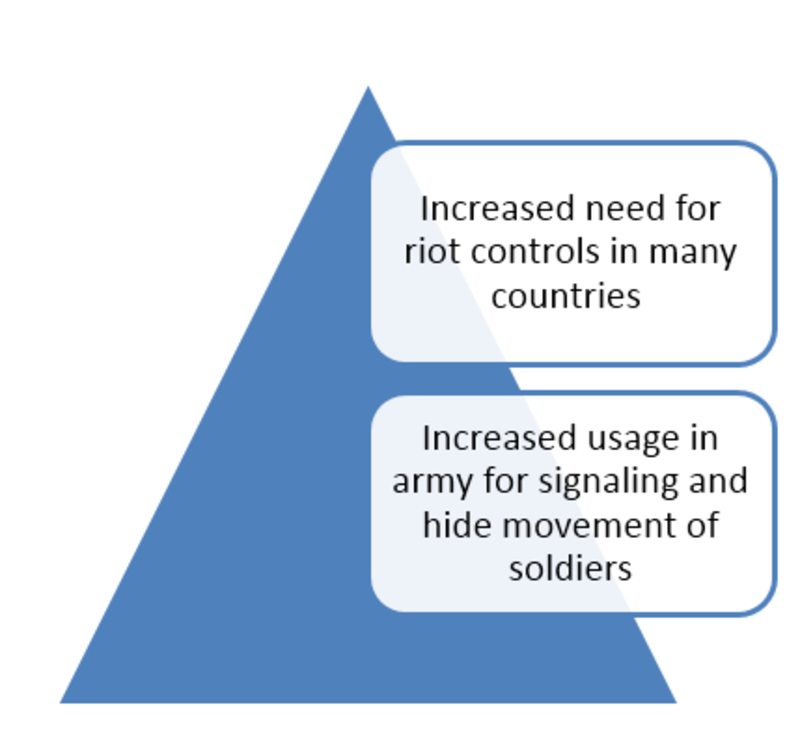 This study provides an overview of the global smoke grenade market, tracking three market segments across five geographic regions. The report studies key players, providing a five-year annual trend analysis that highlights market size, volume, and share for North America, Europe, Asia-Pacific (APAC), the Middle East and Africa, Latin America. The report also provides a forecast, focusing on the market opportunities for the next five years for each region. The scope of the study segments the smoke grenade market by its protection level, protection type, material, and region.

By Type
By Application
By End-Users
By Region