Portable solar charger uses sunlight as the primary source of energy. The solar charger has in-built solar panel, which contains an assembly of photovoltaic cells to converts the sunlight to electrical energy. The charging system has an USB port as an output, to which the chargeable device is connected. Portable solar chargers are easy to hang on backpack, with the presence of a waterproof kit over the charging device, so that they can be used in adverse weather conditions. They form a perfect charging solution for camping, hiking, and various other outdoor activities. Additionally, the use of portable solar power device does not harm the environment, which is likely to increase its popularity during the forecast period.

However, the growing competition amongst portable solar charger manufacturers, stringent environment regulations, and government initiatives & related policies supporting solar energy generation have encouraged the manufacturers to design a product adhering to the government regulations across the globe, which leads to the growth of this market. Therefore, the global portable solar charger market is expected to be valued at ~USD 1,701.0 Million by 2025 at a projected CAGR of 19.25% over the forecast period.

The increasing use of cellphones, laptops and electronic gadgets in China, India, Germany, Norway, and Japan drive the growth of portable solar charger market. Furthermore, technological advancements, growing awareness from the key manufacturers in reducing the carbon footprints, incentives and subsidies provided by federal governments for setting up solar power plants globally, and the low maintenance cost are expected to add to the growth of the portable solar charger market. 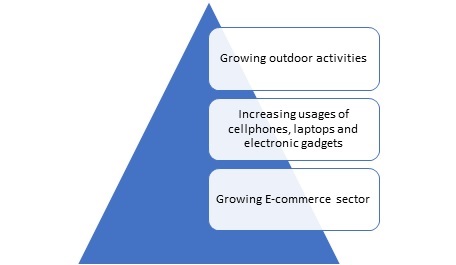 North America is estimated to witness the highest growth in portable solar charger market during forecast period owing to growing demand for envirnment-friendly charging devices. The growth is attributed to the rise in demand for foldable solar chargers, increasing use of various electronic surveillance equipment in military sector, and the presence of key players, such as Goal Zero (US), Go Power (Canada), Acopower (US), and Voltaic Systems Systems (US). In th region, the US is expected to dominate with the largest share and is projected to have the highest CAGR between 2019 and 2025 due to growing adventurous outdoor activities. The US is expected to be the largest market during the forecast period. It is also expected to witness the highest growth rate owing to an increase in the need for clean and alternate energy sources.

The market in Europe is growing due to stringent environmental norms and the growing sales of wearable products. In Europe, Germany is the largest and fastest-growing market in portable solar charger market, whereas the UK, France, Italy, Spain, Belgium, and the Netherlands are the other major countries that contribute to the growth of this market.

In the Middle East & Africa market, Saudi Arabia is the largest market for portable solar charger. Iran and South and East Africa growing at high rates have a major contribution to the growth of portable solar charger market due to the increasing penetration of cellphones across the country with the lack of availability of electricity. In South America, Brazil is the largest and fastest-growing country, playing an important role in this market.

This study provides an overview of the global portable solar charger market, tracking three market segments across three geographic regions. The report studies key players, providing a five-year annual trend analysis that highlights market size, volume, and share for North America, Europe, Asia-Pacific, and the rest of the world. The report also provides a forecast, focusing on the market opportunities for the next five years for each region. The scope of the study segments the global portable solar charger market by type, component, application, and region.