The Increasing Use Of Polyphenylene Ether In Automobiles Is Set To Augment The Market Growth During The Forecast Period :

The Global Polyphenylene Ether Market has been segmented by type, application, and region.

On the basis of type, the market has been segmented into PPE/PA (polyamide), PPE/PP (polypropylene), PPE/PS (polystyrene), and others. The PPE/PA (polyamide) segment accounted for the largest share of the global polyphenylene ether market in 2017 and is expected to grow at a considerable CAGR during the review period. This market growth can be attributed to the increasing use of PPE/PA (polyamide) in automotive industry as it helps to reduce the weight of the vehicles up to 25% and provides resistance to organic and chemical solvents. PPE/PP (polypropylene) is the fastest-growing segment of the global Polyphenylene Ether Market. The increasing use of PPE/PP in electrical and electronics and automotive industry due to superior properties such as hydraulic stability, good dimensional stability, and excellent dielectric strength is driving the market growth.

Based on application, the market has been divided into aerospace, automotive, healthcare, electrical and electronics, and others. The automotive segment accounted for the largest market share in 2017 and is expected to register a significant growth rate during the review period. This growth is largely influenced by the increasing use of PPE in heater and air conditioner control system components, seat backs, body panels, grilles, exterior mirror housings, and under the hood components among others. 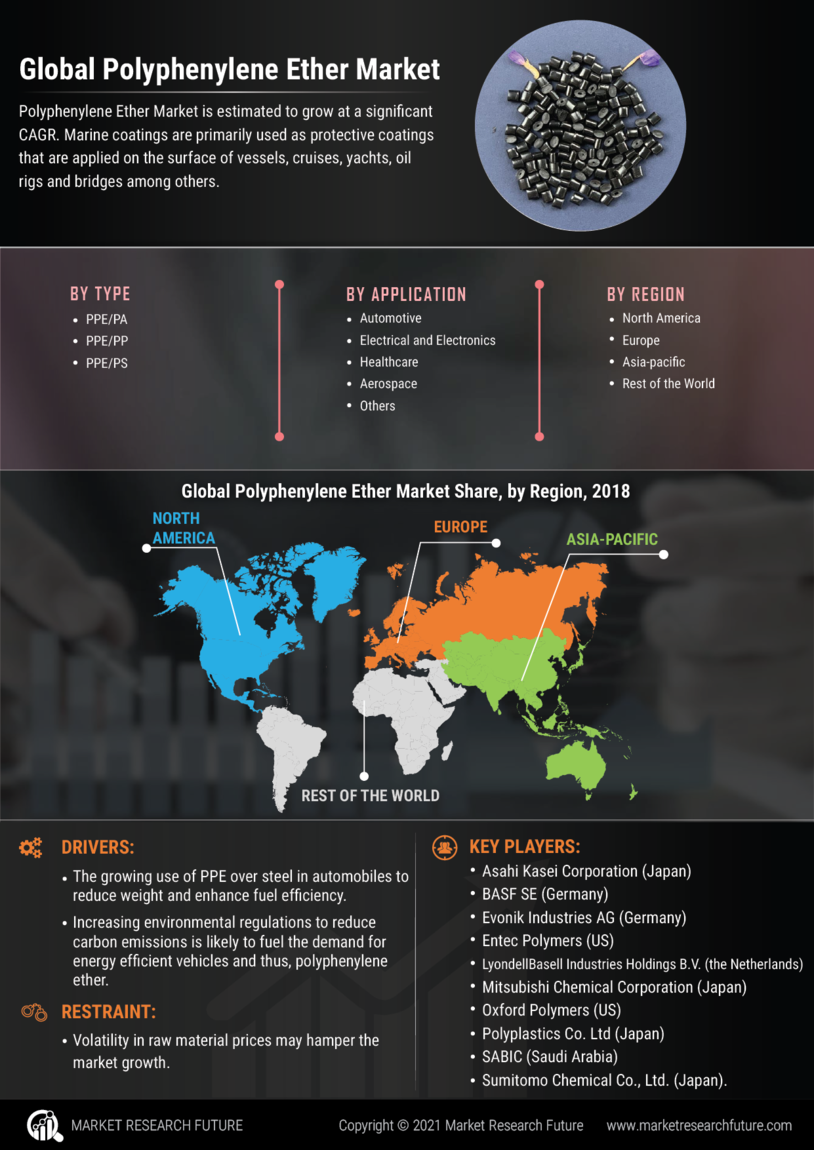 Based on region, the global Polyphenylene Ether Market has been segregated into North America, Europe, Asia-Pacific, Latin America, and the Middle East & Africa.

The market in Asia-Pacific was the largest in 2017 due to the presence of a large number of end-use industries in developing nations including India, Thailand, Indonesia, and Australia among others. The expanding healthcare industry with rising health awareness coupled with increasing per capita income is anticipated to propel the growth of the polyphenylene ether market.

North America is a prominent market for Polyphenylene Ether owing to its increasing use in the automotive and aerospace industries. The European market for polyphenylene ether is expected to grow as a result of rising demand in major end-use industries such as healthcare and automotive. The markets in Latin America and the Middle East & Africa are expected to exhibit considerable growth during the review period due to the expanding end-use industries in the region.