Hydrogen is produced when natural gas is heated with steam which produces syngas (mixture of carbon monoxide and hydrogen). Hydrogen can also be alternatively produced by electrolyzing water. Moreover, hydrogen can be generated from an extensive range of initial raw materials, including the most commonly used technology like steam reforming of natural gases.

Based on application, the market is segmented as petroleum refinery, ammonia production, methanol production, transportation, power generation, and others. The transportation segment is expected to be the fastest growing segment due to the growing demand for fuel cell based electric vehicles. Considering the storage, the market is segmented as on-board storage, underground storage, and power-to-gas storage. Power-to-gas storage is expected to hold a larger share during the forecast period due to higher efficiency with the balance of supply and demand for power electricity networks with renewable energy.

The global hydrogen generation market is expected to grow at ~ 7.80% CAGR during the forecast period. 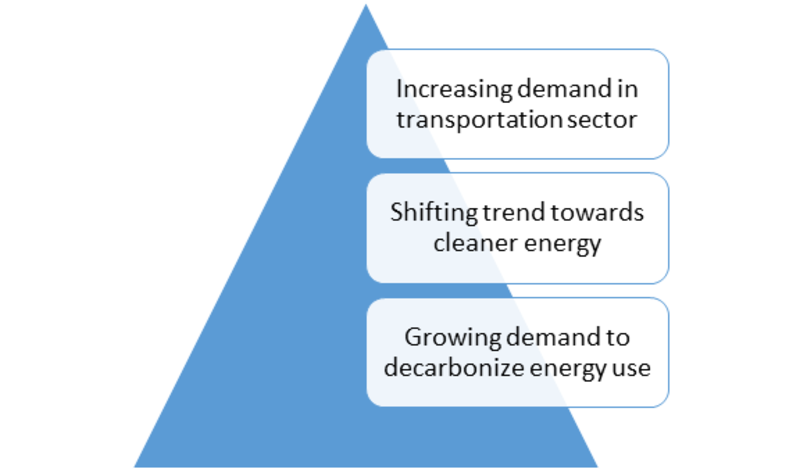 Region wise, Asia Pacific held the largest market share of the global hydrogen generation market in 2017. It is estimated that Asia-Pacific region would be the fastest growing market during the forecast period, mainly due to growing demand to decarbonize energy use and increased demand for hydrogen to be used in fuel cell technology for electric vehicles. Demand for electric vehicles and efficient fuel technology in the countries such as China, Japan is expected to increase the growth of hydrogen generation to install efficient hydrogen fuel cell stations. For instance, in 2018, the Chinese government has established a 2 million new electric vehicle target which includes hydrogen fuel powered vehicles by 2020. This would boost the demand for hydrogen generation in the coming years.

This report provides an in-depth analysis of the global hydrogen generation market, tracking three market segments across six geographic regions. The report studies key players, providing a five-year annual trend analysis that highlights market size, and share for North America, Asia-Pacific (APAC), Europe, Middle East, Africa, and South America. The report also provides a forecast, focusing on the market opportunities for the next five years for each region. The scope of the study segments the hydrogen generation market by its generation and delivery type, storage, application, and region.


By Generation and Delivery Type