Please note that the assessment period of report has been updated from 2017-2024 to 2022-2030. Cordially fill the sample form for updated data

Direct methanol fuel cells (DMFC) is an electrochemical energy conversion device that converts the chemical energy of liquid methanol into electrical energy. DMFCs are used as an alternative to internal combustion engine (ICE) technology as they offer numerous benefits, including low or even zero emissions. They offer various advantages such as eliminating the requirement for fuel reforming and hydrogen storage and using a liquid fuel for power. DMFCs are ideal for small commercial vehicles such as forklifts and tuggers and consumer goods such as mobile phones, digital cameras, or laptops. They are increasingly being used in military applications due to features such as low noise and thermal signatures and no toxic effluents. 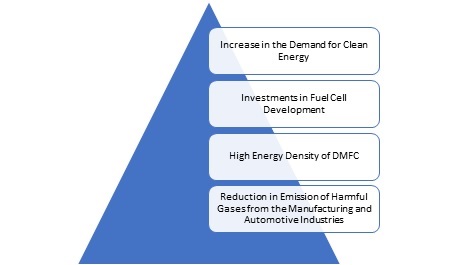 In terms of region, the global market for DMFCs is segmented into North America, Europe, Asia-Pacific, the Middle East & Africa, and South America. North America dominates the global direct methanol fuel cells (DMFC) market. The increase in the demand for clean energy, investments in fuel cell development, high energy density of DMFC, and reduction in emission of harmful gases from the manufacturing and automotive industries are expected to drive the DMFC market in the region.

Asia-Pacific is one of the largest markets for renewable energy sources in the world. With the increase in energy demand due to the growing population and per capita provides a huge market potential for the growth of clean energy in the region. As per the International Renewable Energy Agency (IRENA), Asia-Pacific accounts the two-thirds of the rise in renewable energy installation capacity in 2017. The increasing demand for clean energy and the development in the fuel cell industry drives the growth of DMFCs in Asia-Pacific. Moreover, China being the most populated country, is the fastest growing economy in the world. In June 2015, as per China’s Intended Nationally Determined Contributions (INDC), the country set up a target to increase the share of energy consumption by the non-fossil fuel energy source to 20% by 2030. In addition to this, Oorja Corporation (US), provided DMFCs to the country’s telecom sector for providing power to mobiles and mobile towers. Therefore, the increase in the demand for clean energy is expected to drive the growth of the DMFC market in China during the forecast period

This study provides an overview of the global DMFC market, tracking four market segments across five geographic regions. The report studies key players, providing a four-year annual trend analysis that highlights market size, and share for North America, Europe, Asia-Pacific, Middle East, and South America. The report also provides a forecast, focusing on the market opportunities for the next five years for each region. The scope of the study segments the global DMFC market by Component, type, application, power output, and region.