Automotive Hydraulics System Market is predicted to grow at approximately 6 % CAGR by 2027 :

Pune, India, March 22, 2018 /MRFR Press Release/- Market research future published a half cooked research report on Global Automotive Hydraulics System Market. The automotive hydraulics system market is expected to grow over the CAGR of around 6 % during the period 2017 to 2023.

The automotive industry, for the longest time, has relied on the age-old and reliable mechanical system for driving a vehicle forward. The fuel which actually drives the engine is either the cleaner variety i.e. petrol or the more crude form of the two i.e. diesel. The combustion of this fuel in engine after ignition produces a large amount of power and by-products. About two-thirds of the heat produced is given away in the atmosphere as waste heat and only one-third of the heat is actually usable. This heat energy drives the cam shaft of the engine, thus, giving drive/thrust to wheels, causing motion of the vehicle. This traditional mechanical system has a number of drawbacks, such as loss of power, less efficiency, and more wear and tear with time due to friction, causing a decrease in the output. This basic shortcoming of mechanical system causes the same problems in other areas of the vehicle operation, such as suspension system, brake system, and clutch & gear system.

On the basis of region, the market is segmented based on North America, Asia Pacific, Europe, and Rest of the World. The North America region (consisting of the U.S. and Canada) is a large market for passenger and commercial automobiles for many decades. The sales of automobiles have gone up in the recent times, owing to the increasing population, migration, and preference for personal vehicle over the public transport system. Automotive hydraulic systems are relatively cheaper to manufacture compared to the costlier pneumatic systems. Additionally, they offer precise functional control, creating a strong growth prospect for this system in the near future in this region. The Asia Pacific region is predicted to be the next automotive hub in the world. Due to one-third of the world’s population residing in this region and availability of cheap labor, this region will show exponential growth. The Europe market is known to manufacture some of the most high-end and reliable automobiles, which can be possible more precisely, using the automotive hydraulic system. 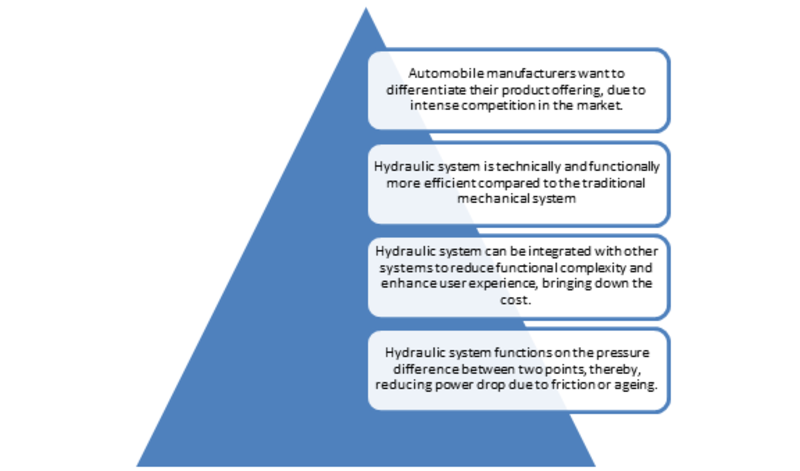 This study provides an overview of the Global Automotive Hydraulics System Market, tracking four market segments across four geographic regions. The report studies key players, providing a five-year annual trend analysis that highlights market size, volume, and share for North America, Europe, Asia Pacific (APAC) and Rest of the World (ROW). The report also provides a forecast, focusing on the market opportunities for the next five years for each region. The scope of the study segments the global automotive hydraulics system market by its Application, Component, End Market, Vehicle Type and Region.