Please note that the assessment period of report has been updated from 2016-2023 to 2022-2030. Cordially fill the sample form for updated data.

Market Highlights
Active spoilers are installed in the vehicles to provide the dynamic adjustments when the vehicle is in operation. Spoilers are placed in the vehicles to spoil the unfavorable air movement across the body of a vehicle to offer improved braking time. Implementation of active spoilers in sports cars as well as passenger cars have resulted in reducing drag at high speed. The spoiler retracts and extends upwards when the vehicle surpasses a specific speed. Stationing of the spoiler is attained with an electric motor which is regulated automatically by the onboard computer, usually based on driver setting, vehicle speed or other inputs. Increasing popularity of sports cars along with escalating consumer income in the developing economies is anticipated to augment the market growth during the forecast period. In addition, speed and appearance of the vehicle are the primary concern of the consumers while purchasing the vehicles. Active spoilers provide a versatile appearance to the vehicle coupled with aerodynamic advantages. Furthermore, pedestal spoilers are widely used in sports cars, delivering better aerodynamics at high speed and expected to be the largest market share by active spoiler type. Increasing penetration of carbon fiber material type for active spoilers in hyper car market is estimated to boost the market demand for sports cars in near future. Various features such as higher-strength-to-weight ratio, workability, and corrosion resistance are the key factors for extensive preference of carbon fibers are anticipated to boost the market demand over the forecast period. 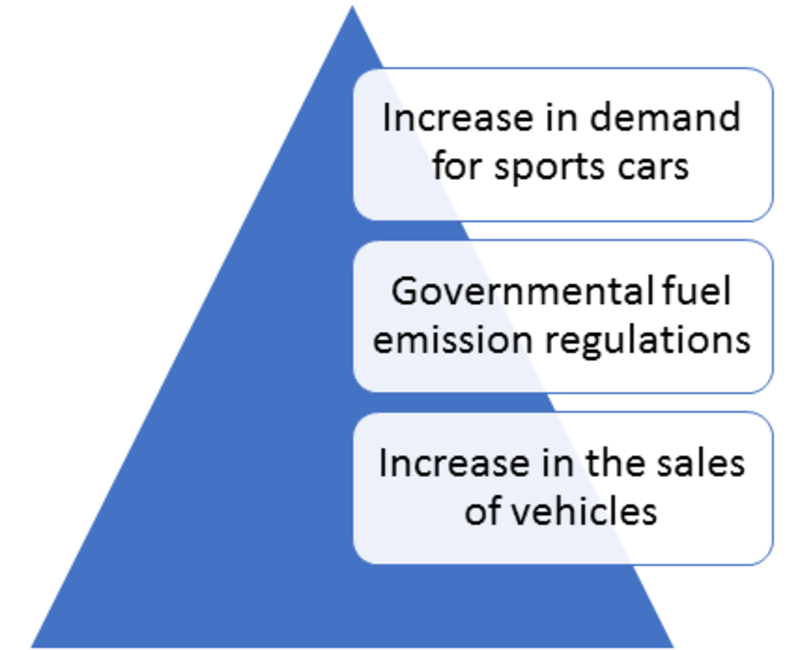 Market Research Analysis
In terms of region, the global market for automotive active spoiler are divided into North America, Europe, Asia-Pacific, and The Rest of the World. North America is predicted to hold the major market revenue share over the forecast period. Rising popularity for sports cars has led to increase in the sales of sports cars in North America. In addition, implementation of active spoilers in passenger cars in order to provide them a better appearance and aerodynamic advantages is anticipated to boost the market demand during the forecast period. Stringent government fuel emission regulations in Europe is presumed to grip a decent market share revenue after North America. The regulatory department of Europe have hosted a target to implement CO2 emission reduction technologies, that has created a positive impact on the OEMs in order to produce a better fuel-efficient design. Asia-Pacific is a well-known vehicle producing region and the mindset of people in the countries from the region is experiencing a change and expected to grow during the forecast period.


This study provides an overview of the global automotive active spoiler market, tracking three market segments across four geographic regions. The report studies key players, providing a five-year annual trend analysis that highlights market size, volume and share for North America, Europe, Asia Pacific (APAC) and Rest of the World (ROW). The report also provides a forecast, focusing on the market opportunities for the next five years for each region. The scope of the study segments the global automotive active spoiler market by type, material type, and region.