Middle East To Become A Global Hub For Renewable Energy

1. Al Dhafra Solar Project in Abu Dabhi, UAE: The Al Dhafra Solar Project, a 2GW photovoltaic (PV) independent power producer (IPP) project, will be located in the United Arab Emirates, around 35 km south of Abu Dabhi. The project is scheduled for commissioning at the end of 2022, and it is anticipated that 4,000 jobs will be generated during the construction period.

3. Hatta Wind Power Project, Dubai, UAE: A first-ever wind power project in the UAE has been unveiled by Dubai Electricity and Water Authority (DEWA). The project is a component of the UAE's sustainability goal to produce 75% of its energy using clean technology by 2050.

4. Sudair Solar Power Plant, Riyadh, Saudi Arabia: With an installed capacity of about 1,500MW, it is on track to grow into one of the biggest single-contracted solar PV facilities in the world and the biggest of its kind in Saudi Arabia. The project, which was the first to be completed under The Public Investment Fund's (PIF) renewable energy initiative, recorded the second-lowest cost of solar PV electricity production in the world [USD 1.239 cents/kwh]. The Sudair PV IPP will have the capacity to power 185,000 homes while reducing annual emissions by about 2.9 million tonnes. The initial commissioning of the project is scheduled at the end of 2022.

5. Manah I & II Projects, Manah, Saudi Arabia: In the fourth quarter of 2024, the two new utility-scale solar power facilities in the Wilayat of Manah that have a combined capacity of 1,000MW are anticipated to begin operating commercially. According to Oman Vision 2040 Implementation Follow-Up Unit, Manah 1 and 2 Solar Independent Power Projects (IPPs) will help Oman move toward using renewable energy to meet the demand for electricity.

Manah 1 and 2 solar projects are being implemented with an estimated expenditure of RO300mn by Oman Electricity and Water Procurement Company (OPWP), the country's sole power and water supplier. The projects have a combined production capacity of 500MW each and are situated in the Wilayat of Manah. 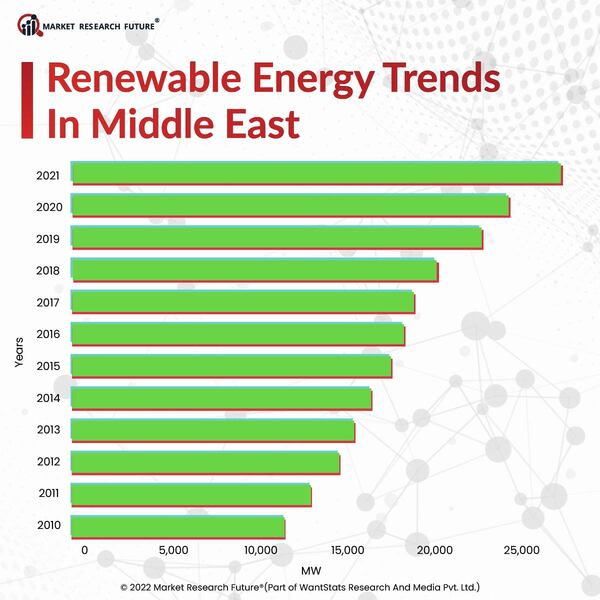 Middle East To Become A Global Hub For Renewable Energy