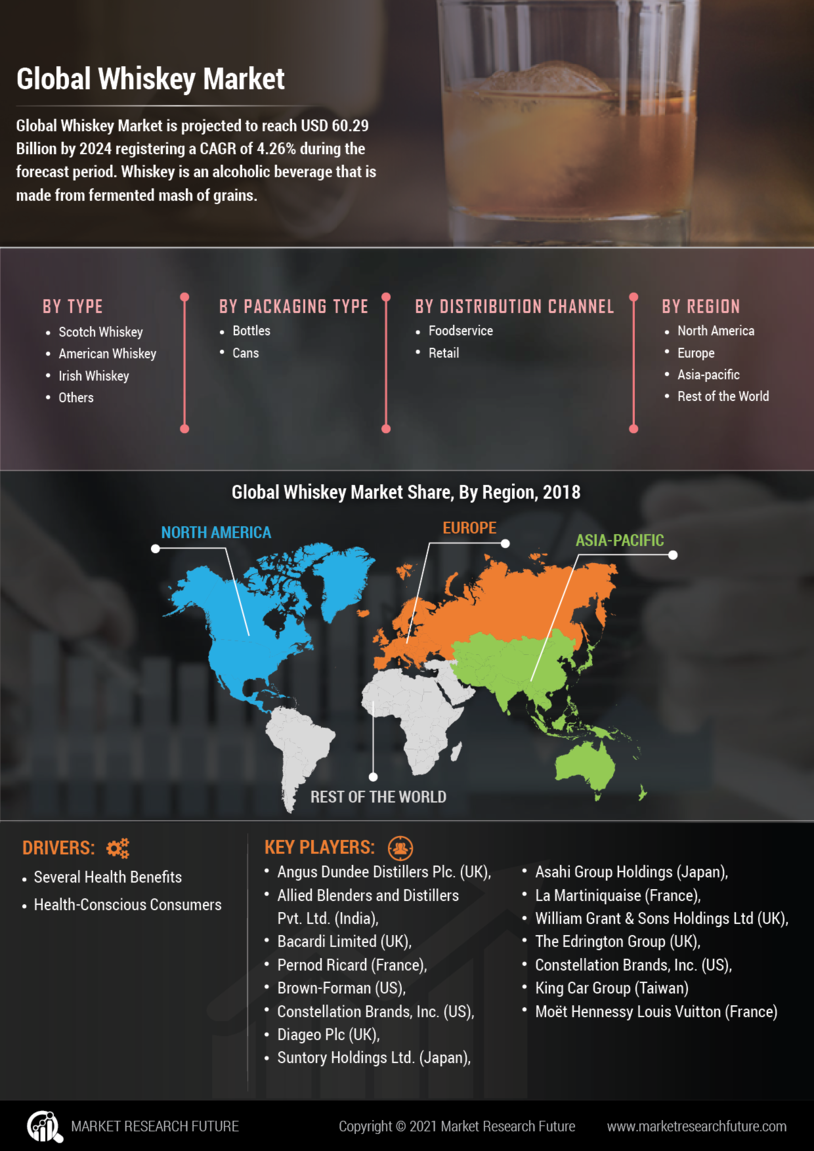 Whiskey market size is anticipated to reach USD 84 billion by 2030, registering a CAGR of 4.35% during 2022-2030. Numerous causes, including rising disposable income levels and shifting consumer choices and lifestyles, are fueling this expansion. The market's main customer group is the millennial generation, which has significant spending power. The product is produced by distillers utilizing grains farmed on farms and a mixture of spices, herbs, and grains to enhance their flavor. The  industry is mostly centered in North America and Europe due to the significant consumer demand in the US, the UK, and France.  In the coming years, the demand for super-premium drinks is projected to increase significantly in industrialized nations, including the UK, France, the US, and Canada. Expanding consumer access and choice, reformed alcohol regulations, restrictions on hospitality taxes, the development of "cocktail culture," and an emphasis on "craft" products across developed regions all contribute to this increase.

The Covid-19 outbreak impacted the market CAGR. According to the company's annual report, Pernod Ricard, one of the major participants in the  market, had a 20% fall in profit margins. With the  shutdown of numerous hotels, eateries, and liquor stores, whiskey sales were constrained. The whiskey business also saw a major decline due to a 65% decrease in  tourist spending and exports. However, since the pandemic, the whiskey industry has recovered much more quickly, and within a few years, it is expected to reach its pre-Covid level. The market industry is expanding due to rising alcoholic beverage consumption in numerous nations.

The primary drivers of the  market's expansion are whiskey's rising accessibility and the rising demand for quality whiskey. The tremendous demand for premium and super-premium whiskeys in developing and developed nations is the main driver of the  market data. Additionally, drinking whiskey in moderation can benefit one's health and lower one's chance of developing cardiac problems and the likelihood of developing high or low blood pressure, increasing the demand for whiskey ly throughout the forecast period.


Irish whiskey is the fastest-growing spirit category during the projection period. Rising demand for Irish whiskey and American bourbon is anticipated to propel market expansion worldwide. Despite having a tiny market share in the overall industry in 2020, Irish whiskey's demand is growing quickly and is anticipated to grow its market during the forecast period. The demand for rye whiskey, Tennessee whiskey, and American Bourbon whiskey has increased overall spirits sales.

The market is categorized into bottles and cans according to the packaging type. The  whiskey growth was prominently high in the bottle sector. A wide range of glass whiskey bottles offers the alcoholic beverage distinctive style, ornamental, high-end antique, and stylish industrial standards. The rising popularity of metal cans will also drive the market trrends due to increased demand for ready-to-eat food.

The  whiskey market segment, based on distribution channels, is food service and retail. In 2021, the retail sector dominated the market. By designating special sections for whiskey items, the retail sector has improved the shopping experience for their customers, which should help the market statistics over the predicted period. However, in 2021, the food service sector also witnessed considerable growth. The proliferation of ready-to-eat foods and changing eating patterns have raised the need for whiskey in the food business to extend the product's shelf life. 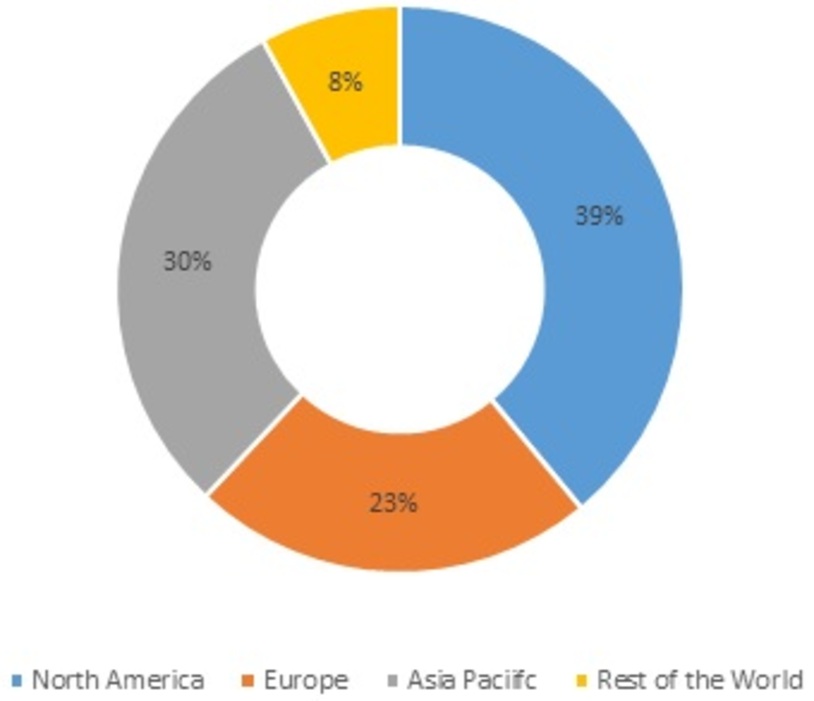 By region, the  whiskey market has been categorized into Asia-Pacific, Europe, North America, and the Rest of the World. The fastest CAGR is anticipated for Asia-Pacific during the review period. The largest share of the market was in North America.

The largest share belongs to North America. Premiumization tendencies, new consumer inclinations toward unique brands, and a diversification of their product lines drive the US market. As a result, the growth over the previous five years was driven by the rising interest among Americans in premium goods, high-end premium brands, and super-premium goods. The market is expanding due to widespread drinking tendencies. Additionally, it is anticipated that during the forecast period, demand for whiskey in the US will grow due to the rising demand for spirits in on-trade channels, such as full-service restaurants and cafés/bars (than off-trade sales performance).

Asia-Pacific experienced the fastest growth rate in 2021. This is primarily attributed to the region's steadily growing middle-class population. Regarding product consumption, India leads the market in Asia-Pacific, followed by China and Japan. The region's young people's growing socialization and weekend partying trends, along with shifting consumer preferences for alcoholic beverages, may help to accelerate  growth further. Increased disposable income, a younger population, being legally permitted to consume alcoholic beverages, and efficient indirect marketing tactics whiskey producers use to advertise their products are all expected to boost regional industry growth and additional product sales.

There are tier-1, tier-2, and local companies in the market. Key strategies implemented by the major manufacturers include portfolio expansion, joint ventures, capacity increase, mergers & acquisitions, and brand promotion. For instance, in October 2022, William Grant & Sons produced a travel retail exclusive collection of whiskies under the Glenfiddich whiskey brand. Vat 01 has a 40% alcohol by volume (ABV), Vat 02 has a 43% ABV, Vat 03 has a 50.2% ABV, and Vat 04 has a 47.8% ABV. Furthermore, in Match 2022, Diageo India introduced Godawan Single Malt, a locally produced artisanal whiskey. The corporation has expanded its portfolio in the country. Godawan was first available in Rajasthan and Delhi, but the firm announced ambitions to expand its distribution across the country.

Scope of the whiskey market Report

The study's objectives are outlined in five stages. They are as mentioned below:

To determine and evaluate the market's size for the  whiskey market report is categorized by type, packaging type, and distribution channel by value (in US dollars). Additionally, to comprehend the need for and consumption by consumers in the forecast between 2022 and 2030

To determine and infer the drivers, restraints, opportunities, and challenges in the  whiskey market growth

To provide detailed information into the leading Market Major Player operating in the market. The company's financial performance during the last two to three years will be described, along with product offers, recent market developments, SWOT assessments, and significant business efforts.

What is the study period of the whiskey market report?

What is the whiskey market growth rate?

A CAGR of ~4.35% is anticipated for the market in the upcoming ten years, according to  whiskey market research.

Who are the leading market players in the market?

Which region accounts for the biggest portion of the worldwide market?

What is the expected whiskey market size by 2030?

Which region has the fastest market growth rate?

Asia-Pacific is predicted to have the fastest CAGR during 2022 to 2030.