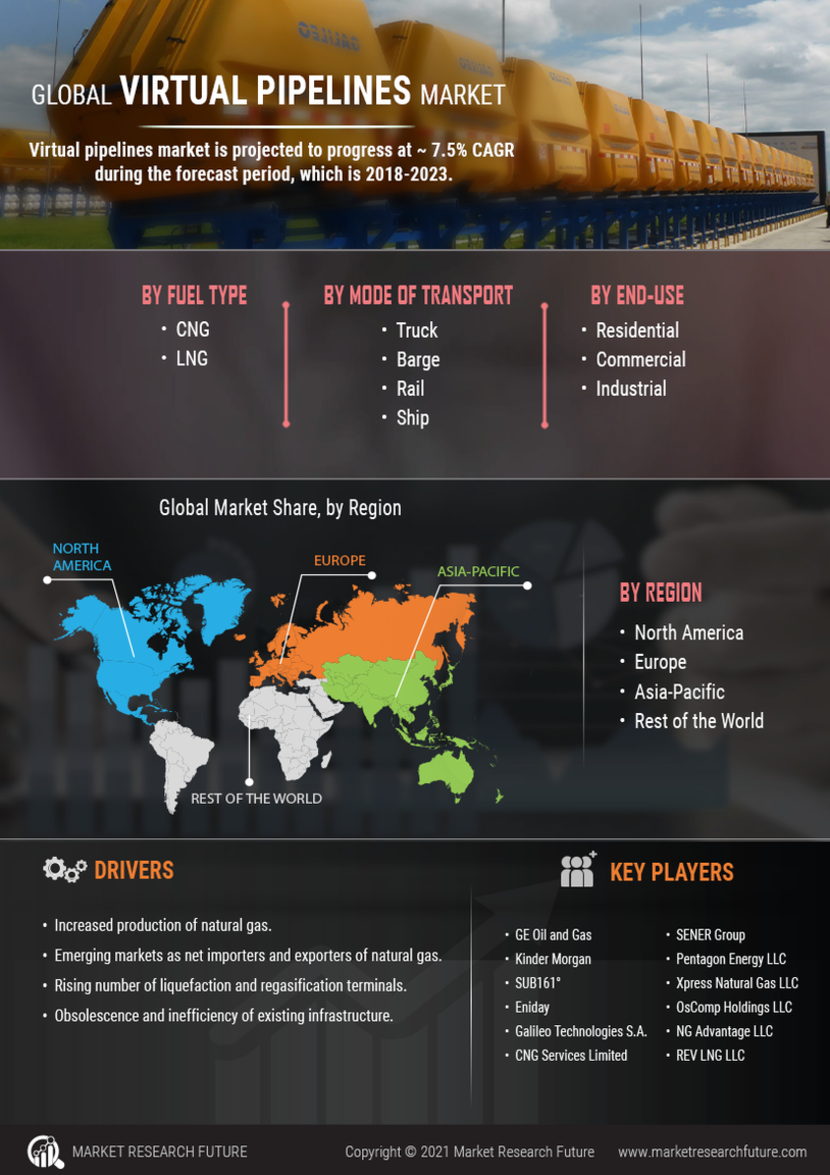 Virtual pipelines market is projected to progress at 6.45% CAGR during the forecast period, which is 2020-2027.

The driving factors for global virtual pipelines market are increased production of natural gas, emerging markets as net importers and exporters of natural gas, rising number of liquefaction and regasification terminals, and obsolescence and inefficiency of existing infrastructure. According to IEA, in 2017, OECD natural gas production grew by 2.4% as compared to the previous year. Besides, the natural gas deliveries also improved by 1.2% in 2017, as compared to 2016. Besides, every year the global liquefaction and regasification capacity is rising, creating demand for more gas transportation to regasification and liquefaction terminals. Moreover, many regions are facing issues related to complex and inflexible gas pipeline infrastructure. For an instance, Europe’s natural gas transportation is limited to inflexible pipes, and gas supply disruption due to the lack of pipeline infrastructure. This creates opportunities for virtual pipelines for maintaining the supply and demand for natural gas.

The global virtual pipeline market has been segmented on the basis of fuel type, mode of transport, End-uses, and regions. Based on fuel type, the market is sub-segmented as CNG and LNG. CNG segment is dominating due to increasing production of natural gas along with increased demand from the liquefaction terminals. Considering the mode of transport segment, the market is classified as truck, barge, rail, and ship. Ship segment holds the largest market share due to increased net imports for natural gas from developing nations. In 2017, total natural gas imports increased by 5.1% as compared to 2016. Based on end-use, global virtual pipeline market is categorized as residential, commercial, and industrial. Industrial segment is dominating the market owing to increased power generation from natural gas, and expanding fertilizers industry. 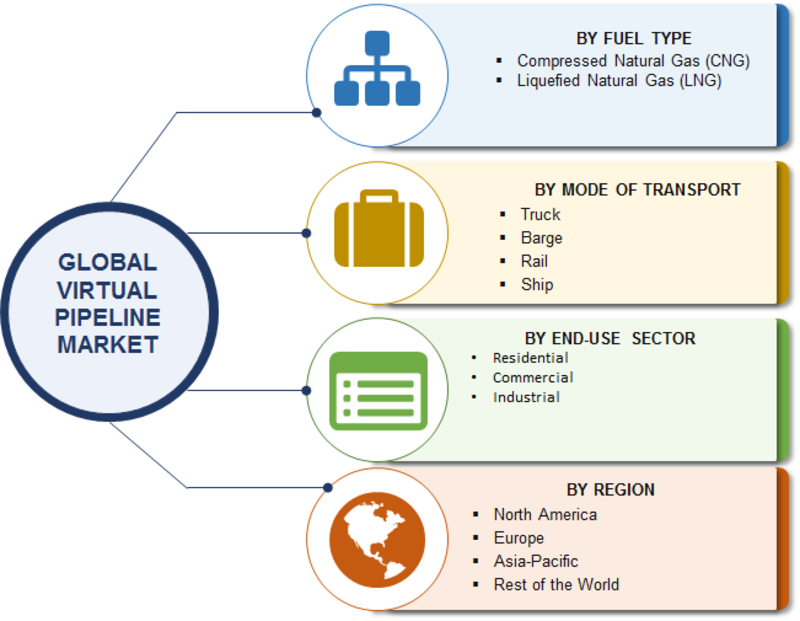 Europe region is expected to dominate the market for virtual pipeline due to the increasing demand for natural gas for power generation and heating spaces. The region demands better gas transportation facilities as the existing physical pipelines have become obsolete and require high costs for maintenance and improvement. Asia-Pacific is the fastest growing region as the net importers for natural gas are the developing nations of the region. China itself was the largest consumer of natural gas in 2017, and the consumption is expected to grow with industrialization and urbanization projects. Emerging markets of the region such as Indonesia, and Pakistan are also witnessing high demand for natural gas, which is raising the opportunities for virtual pipelines in Asia Pacific.

The advantages of the virtual pipelines include lowered cost investments in the infrastructure construction, and strategically locating the prime consuming markets. Virtual pipelines are not vulnerable like the physical pipelines, where complete flow and transport of natural gas is prohibited in case of any disturbance or calamity in the pipeline.

In the future, what CAGR is predicted for the virtual pipelines market?

A 7.5% CAGR is estimated to define the development of the market in the coming years.

How is the performance of virtual pipelines market companies going to moving the market revenues?

A strong income level is predicted to be seen in the market.

Who are the distinguished firms functioning in the virtual pipelines market?

What is the regional forecast for the virtual pipelines market?

The European region is encouraging the market significantly in the upcoming period.

What are the factors persuading the growth in the virtual pipelines market?

The amplified production of natural gas and the appearance of emerging markets as net importers are predicted to motivate the market.

Virtual Pipelines Market Driven By The Growing Demand For Cng