Tidal Energy Market Information by Foundation Type (Barrage, Gravity Base, Monopile, Semi-submersible and Others), Capacity (Up to 100 kW, 100 kW to 500 kW and Above), Depth of installation (Shallow  Water, Transitional Water and Deep Water )- and region- Forecast To 2030

Tidal Energy Market share is expected to reach USD 4 Billion by 2027, expanding at a compound annual growth rate (CAGR) of 20% during the forecast period.

The fluctuating sea levels provide tidal power. Because tidal currents are completely predictable, it is the most dependable renewable energy source. The kinetic energy produced by the natural rise and fall of the tides is captured and turned into electricity. It is dependable because of the regular shift in tidal movements that occur twice a day due to the moon's gravitational attraction. A fairly accurate estimate of a tidal energy project's overall output can be easily made. Many recent technological advancements and improvements, both in design and turbine technology, suggest that overall tidal power availability is substantially higher than previously believed. A few examples include dynamic tidal power, tidal lagoons, innovative axial turbines, and cross-flow turbines.

The industry has been growing due to a greater focus on developing cleaner power production technologies that have the least detrimental impact on the environment. Furthermore, the rising global population, growing industry in emerging economies, and increased infrastructure building activities all contribute to a significant increase in electricity demand. This aspect, together with the growing number of rigorous environmental legislation around the world, is encouraging people to transition to cleaner, more environmentally friendly energy sources. In the future, this responsibility is projected to fuel the worldwide tidal energy market.

The world is transitioning to a low carbon future in which clean, affordable, renewable electricity powers for daily lives. Already many countries source at more than 50% of their electricity from renewables. With the right technology, investment and policy in place, believe the majority of the world will be powered by renewable energy by 2050. The increasing population and change in life style, create a great demand for energy resources. This ever increasing demand puts great pressure on non-renewable conventions energy sources and makes it necessary to look for other alternative energy resources. Renewable energy sources such as the sun, wind and water cause no emission of poisonous gases and are available locally.

Increased focus towards development of cleaner power generation technologies, which have the least negative impact on the environment, have been driving the market towards growth. Moreover, global population growth, thriving industries in emerging economies, and a rise in infrastructure development activities lead to a massive rise in demand for electricity. This factor, along with the rise in stringent environment protection regulations across the globe, is encouraging the switching to cleaner and environment-friendly energy resources. This obligation is expected to drive the global tidal energy market in future. However, innovation in design and turbine technology for tidal power is expected to influence and increase the installed capacity of tidal plants. The greatest barrier to tidal range technology advances are the relatively high upfront costs of the plants. Moreover, limited availability of sites has remained a major constraint in the development of tidal power projects. Despite all these challenges, tidal energy provides the excellent long-term potential for economic growth, and policy makers at EU and Member State level are seeking innovative ways to accelerate commercialization. 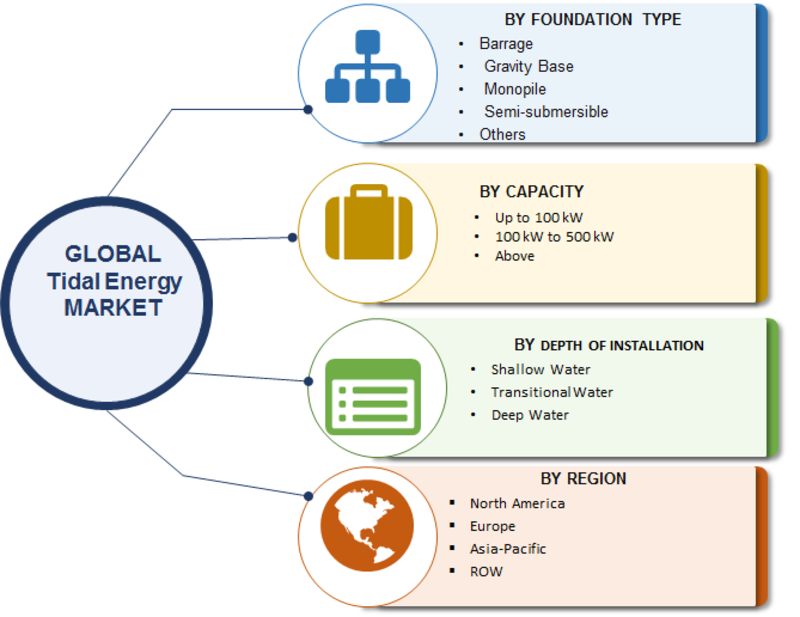 The global market can be segmented by geography into Asia Pacific, North America, Europe, and the Rest of the World. Europe is the global leader in the development of ocean energy technologies, hosting most of the global developers (52% of tidal stream and 60% of wave energy developers). South Korea is expected to lead with the tidal barrage technology and is expected to add more capacity.

The renewable industry in North America is quite developed. According to the World Energy Agency, the driving forces to contribute in the North America market are the location, incentives, and government policies.

Whereas, the Asia Pacific region is expected to grow in the forecast period due to factors such as increasing demand for energy, identified as the best replacement to other conventional fossil fuel energy and are used to reduce carbon emission by effectively meeting the electricity needs.

Tidal power is obtained due to alternating sea levels. It is the most reliable source of renewable energy since tidal currents are 100% predictable.The kinetic energy generated from the natural rise and fall of tides is harnessed and converted into electricity. The constant change in tidal movements that occur twice a day from the moon’s gravitational force make it reliable.  A very reliable estimation of the total output from a tidal energy project can easily be made. Many recent technological developments and improvements, both in design and turbine technology indicate that the total availability of tidal power is much higher than previously assumed. Dynamic tidal power, tidal lagoons, new axial turbines, and cross flow turbines, are a few such improvements.

What is the capability of the tidal energy market for CAGR in the forecast period?

A 20% CAGR is estimated to boost the market’s capability in the upcoming period.

What is the revenue level estimated in the tidal energy market globally?

A sound income level is expected to shape the market in the upcoming period.

Which regions are expected to have a notable influence on the global tidal energy market?

The European region is forecasted to conquer the greater part of the market.

What segments are created in the tidal energy market to better visualize growth?

The segments of capacity, depth of installation, foundation type, and geography are perceptible in the market.

What factors are identified with a positive influence on the tidal energy market?

The developments in design and turbine technology are expected to modify the market’s progress in the coming period.