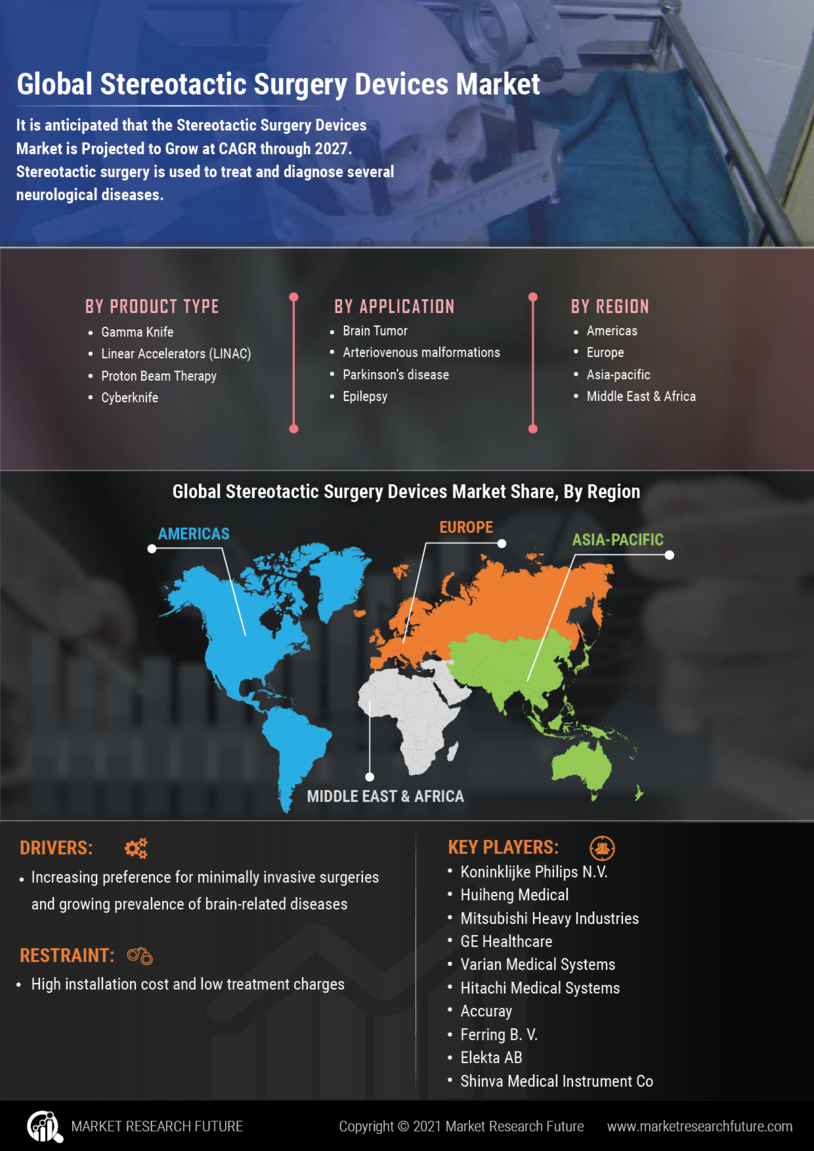 According to the latest research report, stereotactic surgical devices market size is predicted to develop at a high rate over the projected period. It is expected that the market had market revenue of Usd 16.59 billion in the year 2017 and that it would increase at a compound annual growth rate of a CAGR of 5.2 percent during the forecast timeframe 2022-2030. Multiple neurological illnesses are treated and diagnosed with the use of stereotactic surgery. If a tumour is eliminated with the use of image guidance, that is, earlier collected pictures are utilized to direct the operator to the precise site of the tumour in the brain, stereotactic brain surgery is considered successful.

Over the forecast timeframe, factors such as a rising desire for minimally invasive operations and a growing incidence of brain-related ailments like Parkinson's disease are likely to drive the market's expansion. As per the Parkinson's Foundation, around 60,000 new cases of Parkinson's disease are identified in the United States each year. In accordance with the same authority, it is predicted that around 930,000 persons in the United States will be affected by Parkinson's disease by the end of the year 2020. Unfortunately, because of the high installation costs and modest treatment costs, the technology's return on investment is delayed, limiting its widespread use. During the projected period, this aspect is likely to have a negative impact on the stereotactic surgical devices market outlook expansion.

In response to the sudden emergence of the COVID-19 pandemic, strict lockdown measures were imposed across multiple countries, causing significant interruptions to the importation and exportation of stereotactic surgery devices.

Furthermore, it is anticipated that the increasing acceptance of these devices among patients with severe epilepsy, arteriovenous malformations, and Parkinson's disease would substantially boost the market in the ensuing years. An increase in the prevalence of certain medical disorders has had a favourable influence on the market's development.

The initial high setup costs and the existence of tight policy requirements are two factors that are limiting the market's development.

Unfortunately, because of the high implementation costs and reduced treatment costs, the technology's return on investment is delayed, making it less attractive for use in hospitals and medical settings with limited financial resources.

One reason for the widespread use of LINACs is the increased effectiveness in treating the afflicted regions with a larger dose of radiation while simultaneously decreasing the danger of radiation harm to normal tissues. The fact that it causes less surgical pain than traditional radiotherapies is also helping to increase its popularity. Furthermore, several organizations are launching public service announcements to inform the public about new technology and its benefits to society. The variables listed above are anticipated to have an impact on the segment's future growth and development.

According to the reports, The worldwide stereotactic surgical devices market has been categorized based on the kind of device and the Application it is used for. The worldwide market has been classified based on product type into the following categories: linear accelerators (LINAC), gamma knife, proton beam treatment, and cyberknife (cyberknife). Because of the increasing acceptance rate and several deployments, the linear accelerators (LINAC) sector is anticipated to have the greatest share in the market by type of product.

Moreover, the cyberknife category is predicted to increase at the quickest rate over the course of the evaluation period due to the increasing popularity of the technology in emerging countries.

The market is segmented on the kind of device, Application and region. The global stereotactic surgical devices market value is expected to witness decent growth during the forecast period.

The Application is segmented into brain tumours, Parkinson's disease, arteriovenous malformations, epilepsy, and other conditions.

According to geography, the market has been split into the Americas, Europe, Asia-Pacific, and the Middle East and African countries. Moreover, the stereotactic surgical devices industry in the Americas has now been classified into North America and South America, with the North American market being further subdivided into the United States (US) and Canada (Canada). Globally, the Americas are expected to lead the worldwide stereotactic surgical devices market due to the rising frequency of neurological illnesses, the existence of a well-developed medical infrastructure, and the high purchasing power of the region's population. It is estimated that around 10,000-15,000 new instances of trigeminal neuralgia arise every year in the United States, as per the National Organization for Rare Diseases.

Europe is predicted to have the 2nd largest stereotactic surgery device market share in the coming years. The rising prevalence of brain illnesses in this area, as well as the existence of a sophisticated healthcare system, are contributing to the market's expansion.

Stereotactic surgical equipment is available for purchase in the Asia-Pacific area, which comprises the following countries: Australia, China, India, Japan, the Republic of Korea, and the Rest of Asia-Pacific. The Asia-Pacific area is predicted to be the leading region in the next years due to the increasing frequency of brain-related disorders and the continually expanding healthcare sector.

With the least amount of market participation, the Middle East and Africa are the least developed regions. The Middle East is predicted to hold the major share of the market in this area, owing to a well-developed medical industry and an increase in official measures to support the healthcare industry.

The important leading players in the worldwide Stereotactic Surgery Devices Market trends are creating new technologies and partnering with other firms to form strategic partnerships to enhance their market share in the long run.

What is the current valuation of the Stereotactic Surgery Devices Market?

Current valuation of the Stereotactic Surgery Devices Market is USD 16.59 billion as of 2017.

What CAGR the Stereotactic Surgery Devices Market would achieve over the forecast period of 2018 to 2023?

Stereotactic Surgery Devices Market would grow with a 5.2% CAGR over the forecast period encompassing 2018 to 2023.

What can prevent the growth of the Stereotactic Surgery Devices Market?

Stereotactic Surgery Devices Market may face a slumbering effect from factors like high installation cost and low treatment charges, which could delay the investment return.

Which product type would be the fastest to grow in the Stereotactic Surgery Devices Market?

Cyberknife segment is expected to be the fastest-growing segment of the Stereotactic Surgery Devices Market.

Stereotactic Surgery Devices Market to Grow 5.2% CAGR during the Forecast Period 2018 to 2023