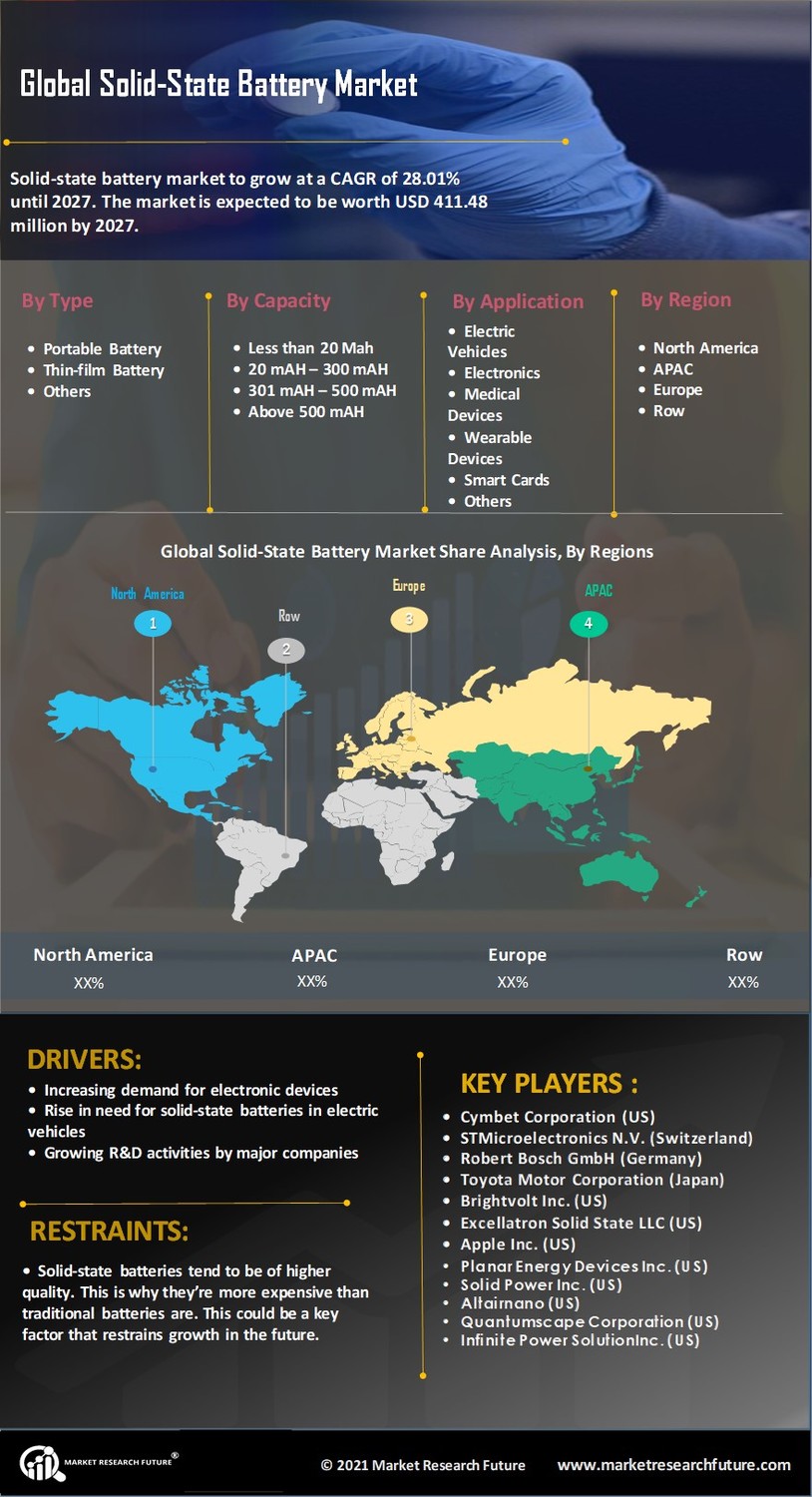 These batteries are used in electric vehicles. The demand for electrical vehicles is growing rapidly, as is the market. In fact, according to the International Energy Agency, the electric motors market is expanding at a breakneck pace.

The solid-state battery market suffered a bit during and slightly after the pandemic. COVID-19 turned out to be more than a nuisance virus. It was very dangerous and made many people extremely ill. The virus even caused more than a few deaths. Governments soon noticed that this virus could not be taken lightly. They responded by imposing quarantines and lockdowns. These were temporary in nature since they had limited effect.

People were not as mobile during the lockdowns and quarantines. Therefore, they were not driving their cars nearly as much. The solid-state battery industry saw a decline in demand. Some companies were forced to scale back production or shut down temporarily as a result.

The solid-state battery market remains highly competitive. Part of the reason for this is the fact that there are too many companies in this industry. What attracts companies to the industry is the fact that revenue and profit generation potential is high. In any case, companies find that they must invest heavily in research and development in order to survive. Of course, they can always merge with/acquire other successful companies and/or enter into strategic partnerships with successful companies.

BrightVolt Inc is a good example of a company that has stayed competitive even during the COVID-19 pandemic. By investing heavily in research and development it has ensured that it can develop and market superior products that the competition may not necessarily be capable of making and marketing.

The solid-state battery market growth rate is picking up now that people are starting to ignore the pandemic and become more mobile. This means that they are driving around more often. This is leading to more people and companies buying electronic cars and other vehicles. Many companies that make these types of cars are investing more in intensive research and development to develop what they like to call ‘the perfect battery!’

There were about 5.1 million electric cars in the entire world in 2018. This represented an increase of about 2 million car sales from 2017. The number of new sales of electronic cars increased by 200% from 2017 to 2018.

There is another trend that is likely to drive growth in the global market. This is the increased popularity of the FitBit and other smart wearables technology. In this case, the sale of thin-film solid batteries is on the rise.

Solid-state batteries offer their users many advantages that conventional batteries don’t. The first one is that they operate for longer because they have greater electrochemical stability. They also release more energy when they do operate and they don’t catch fire easily.

Many companies are seeing that there is a lot of money to be made in the market if they market and develop the right products. That’s why they’re investing heavily in research and development to come up with the ideal solid-state battery.

Solid-state batteries tend to be of higher quality. This is why they’re more expensive than traditional batteries are. This could be a key factor that restrains growth in the future.

Perhaps the biggest challenge that companies in the global market face lie in creating more energy-efficient batteries while continuing to keep the prices at points where the masses can afford them.

Brightvolt Inc is a successful American company. It has managed to succeed by creating a sustainable competitive advantage through research and development. It has managed to come up with a product that is superior to what the competition produces and sells. This is the lithium-polymer battery.

The market can be grouped into the following sub-segments based on type:


The thin-film battery sub-segment is projected to have the greatest market share. The reason for this is that the materials used to make solid-state and thin-film batteries are increasingly being used in packaging, smart cards, medical cards, wearable devices, and wireless communications. Thin-film batteries, especially, are friendlier to the environment than other types of batteries. Hence, they are expected to become more popular in a world where the population is increasingly worried about the environment.

The market can be grouped into the following sub-segments based on capacity:

The above 500 mAh sub-segment is expected to have the highest growth rate. The reason why is that it’s increasingly being used in IoT products and accessories. These types of batteries are small and recharge easily and quickly.

The market can be grouped into the following sub-segments based on application:

Also, many companies are engaging in intensive research and development to try to develop and market higher-quality batteries. Many governments are trying to make their nations greener bypassing strict rules regarding vehicular emissions. This is also driving growth in the solid-state battery market.

The market can be grouped into the following sub-segments based on region:

The North American region leads in terms of market share because its populations are relatively well-educated and wealthy. North America consists of three nations: Mexico, Canada, and The United States of America. People in the latter two nations especially are demanding that their electronics products be better, faster, and more efficient. This requires the use of higher-quality and superior batteries. Solid-state batteries happen to be this type of battery. Some electronics products that are in high demand in the North American region include packaging, smart cards, and electric vehicles.

These two nations also have some of the strictest rules and regulations in the world regarding the number and type of vehicular emissions that can be released into the air. This is leading to a rapid increase in demand for smart cars which use solid-state batteries.

The Asia-Pacific region is seeing huge growth in the solid-state battery market. The reason for this is that all nations in this region, including India and China, are industrializing and urbanizing rapidly. Their citizens are becoming wealthier. They want and need better vehicles and are willing to spend more on electric vehicles. Hence, the increase in demand for solid-state batteries. Also, the governments in the nations in this region are starting to get stricter in terms of the amount and type of vehicular emissions that can be released into the environment.

The European Union had the second largest market share last year. The reason for the European Union’s larger market share is because its governments have been encouraging the development and usage of solid-state batteries in a variety of devices. This includes electric cars.

How Big is the projected CAGR of the global solid-state battery market?

The global solid-state battery market is projected to register a whopping 28.01 % CAGR in the forecast period.

Who are the key players operative in the global solid-state battery market?

What is the type segment of the global solid-state battery market expected to witness the highest growth?

The thin-film battery segment is slated to expand as the fastest-growing segment.

What is the application segment of the global solid-state battery market expected to witness the highest growth?

The electric vehicles segment is slated to expand as the fastest-growing segment.

What is the expected market valuation of solid-state battery market during forecast period?

The global solid-state battery market is expected to record a substantial market valuation of USD 411.48 during forecast period.