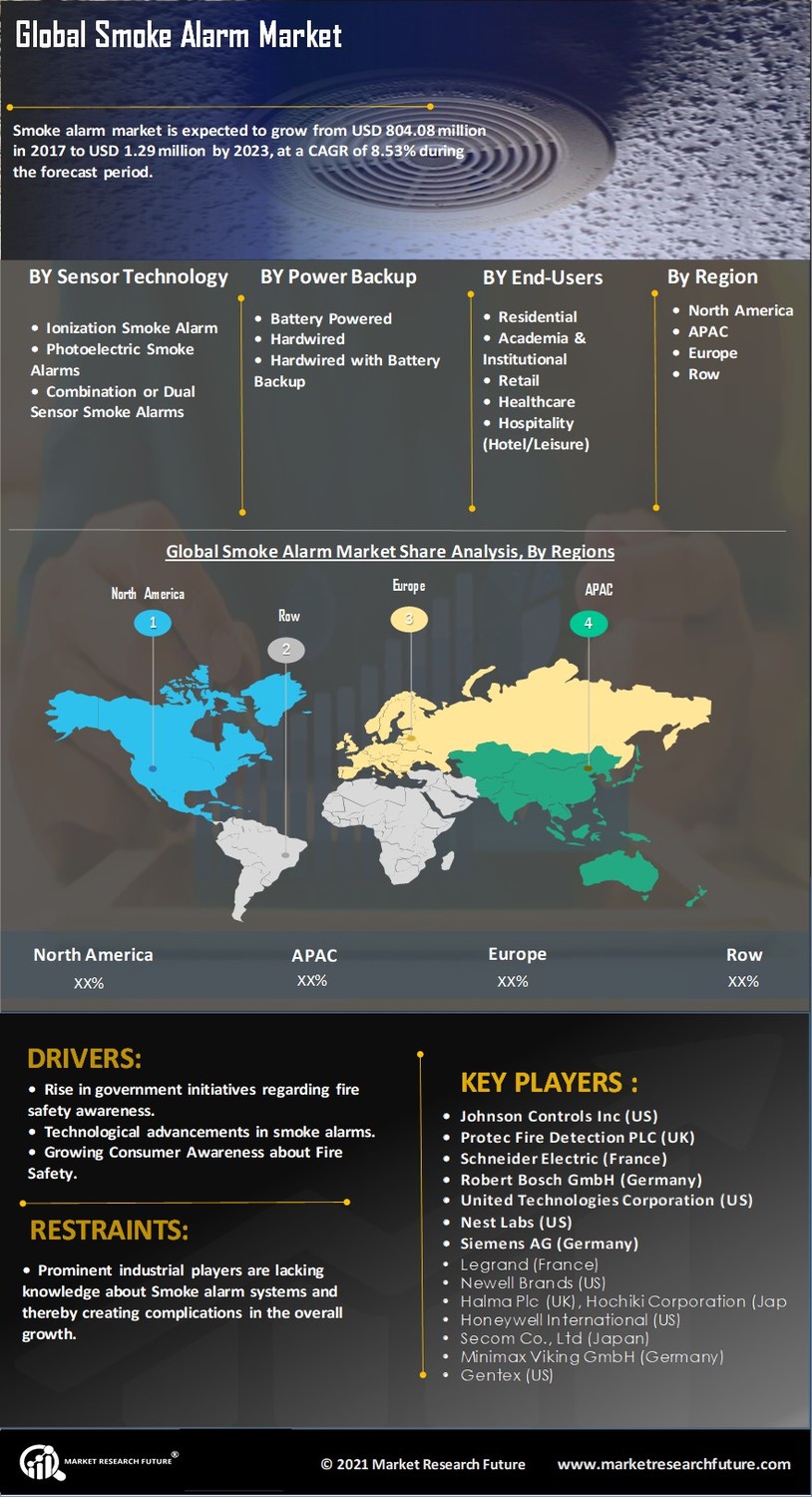 Globally, the size of Smoke alarm market is expected to garner USD 1.29 million by 2023, at a CAGR of 8.53% during the forecast period driven by the installation of Smart Smoke alarms and fire alarm systems in residential units have increased the value of the residential property and are fueling the growth of the real-estate sectors as well.

The smoke detectors and fire detectors have efficiently detected the fire hazards at early stages and are capable of preventing huge financial and deaths or injuries. Increasing government initiatives and fire safety awareness regarding the Smoke Alarm industry are considered as the major driving factors for the Smoke Alarm market growth.

The Pandemic has affected several industrial sectors and commercial sectors. The production was held up due to prolonged lockdown and scarcity of human resources. The markets were increasingly adopting new trends to continue their businesses and manufacturers of healthcare-related products were given preference and adopted different strategies to combat the crisis. During the pandemic, the Smoke detectors were facing both ups and downs in terms of market revenue. The commercial sectors and retail shops were not operational throughout the pandemic, thereby decreasing the demand for the Smoke Alarm market growth. However, the hospital, medical services-related offices were increasing the demand for fire alarm systems and smoke detectors.

On the other hand, the scarcity of the raw materials for the manufacturing of the smoke detectors and the constrained inventory and disruption in the supply chain, with the increasing demand for the electronic components have caused a decline in the Smoke Alarm market value during the pandemic.

The San Francisco administration has recently shared the shocking statistics related to the fire-related hazards and accidents, which states that over 4000 people die due to fire-related accidents in the residential areas and over 2500 people get severely injured in such incidences every year, which were primarily due to lack of fire extinguishing systems and smoke detectors. On the other hand, the advent of laser smoke detectors and their capability of providing intense security is driving the overall growth of the Smoke Alarm industry.

The latest technological advancement in the field and methodology are driving the overall growth of the Smoke Alarm industry. The ionization technologies in the smoke detecting systems have been replaced by photoelectric systems which are highly responsive. The integration of other protective systems, such as fire suppressants, burglar alarms, and cameras integration during the incidences are presenting lucrative opportunities for the Smoke Alarm market growth.

The governmental and non-profit organizations are providing outlines and updating them according to the construction and infrastructure to reduce or prevent fire hazards in the residential and commercial sectors. Further, Smoke detecting systems are increasingly installed in the automotive to increase fire safety while driving.

The Smoke alarm market is currently picking up pace, however still faces issues with the lack of active participants and professionals in the field of product management and maintenance.

The technical challenges and loopholes in the algorithms in detecting the capability of the device and frequent false alarms due to issues in the algorithms are also considered as the major challenges for the overall growth of the Smoke Alarm industry. On the other hand, complete control of the environment is required; disturbance of foreign elements or interruptions caused by animals or counterfeit products or activities could damage the Smoke detecting systems.

The smoke detectors in the residential units are expected to comply with the updated norms of National Fire Alarm and Signaling Code requirements. The standards are diversified based on the varied types of detectors. Some of the detectors are categorized as Automatic Fire detector, Automatic fire extinguisher and suppression system, Fire-gas detector, Flame detector, gas detector, heat detector, and so on. The placement of the system and the functionalities and overall design of the systems should comply with the standards imposed by NFPA 72. The demand for fire alarm systems and smoke detecting systems that come under the NFPA 72 regulations is rapidly increasing amongst the industrial and residential sectors.

The manufacturers are focusing on integrating several security-based systems, associated with the requirements of residential units. Several governments of developing countries are focusing on building smart cities in their respective countries. Some of the leading manufacturers are designing a system that helps in reducing the overall ownership costs. Such strategy includes diving the concerned areas into zones and properly installing the fire detecting systems in those zones for early detection of the fire hazard. The technological development in the Smoke Alarm industry and increasing investments are expected to boost the overall Smoke Alarm market growth.

The smoke alarm or detector is increasingly installed in the vehicles due to highway vehicle fire accidents. There were around 175,000 fire accident cases recorded between the years 2018 and 2019, which was reported by the National Fire Protection Association. Another report from the same association has claimed that deaths due to vehicle fires were 4.5 times higher than the deaths caused by non-residential structure fires and about 1.6 times higher than that of apartment fires. Such factors have propelled the automotive industry to install fire detecting systems in vehicles. This has increased the overall Smoke Alarm Market growth in recent years.

Based on Power Sources:

North America and Asia Pacific regions are likely to witness more revenue generation in the forecast period, among other competitive regions. North America is considered one of the most sustainable and well-established economical regions. Additionally, the manufacturers of smoke alarms and other security-based systems are increasing in the region. The growing economy has also increased the number of commercial and residential units in the region. Such factors have presented lucrative opportunities for the Smoke Alarm market growth in the forecast period. A recent study shows that North America has developed about USD 588.5 million in the year 2021 owing to the increasing investments and financial support from the US government.

Asia-pacific is also showcasing higher CAGR in recent years owing to the developing infrastructure and growing urbanization. The residential and commercial spaces are rapidly increasing with the increasing population, the demand for essential services such as healthcare centers, educational centers, malls; theaters are also increasing in the Asia Pacific region. Such factors are likely to increase the Smoke Alarm market growth in the forecast period.

In the year 2019, Siemens has launched its Smoke alarm system which could be integrated with the voice alarms and can afford protection against fire. It has also gotten approval from European standards for its acoustic and optical laser facilities.

In the year 2021, Bosch has launched the Smart Smoke alarm system which has a couple of essential integrations that adds value to the system, the smoke detector system was integrated with burglar alarm and air quality sensor, which has enhanced the overall performance and value of the system. The cameras integrated with the system will be activated in the case of emergencies. Such features of the system made it stand out in the market.

Which aspirants are pulling the development of the smoke alarm market?

What is the CAGR capability of the smoke alarm market?

A CAGR of 8.53% is predicted to influence the expansion of the market in the imminent years.

Which region is foreseen to form its dominance in the smoke alarm market during the forecast period?

The existence of a sustainable and well-established economy in the North American region has soared the market.

What segments are existing in the smoke alarm market?

Power backup, sensor technology, end-user, and region are the distinguishable segments in the market.

What are the factors are guiding the smoke alarm market to an advanced development level?

The intensification in government plans concerning fire safety awareness is anticipated to spur the market in the coming period.