Please note that the assessment period of report has been updated from 2018–2026 to 2020-2027. Cordially fill the sample form for updated data.

The SAML authentication is a standardized method of authentication to prove one’s identity and enable access to all the external applications and services they desire to access. SAML is a set of standards that enables all internet users to log in using a web portal and seamless access the information or other online services without logging providing credentials multiple times. SAML is an open-source XML protocol that enables the exchange of information for authentication and authorization between an identity provider and service provider (usually a cloud or a web-based application). SAML is also known with other terms such as token-based authentication, security token services, federated authentication, and identity federation. It was first released by the Organization for the Advancement of Structured Information Standards (OASIS) in 2002.

The security assertion markup language (SAML) authentication market is driven by the increase in the need for effective management of bulk identities and the rise in demand for a consistent and unified methodology to ensure the security of identities. Additionally, the increase in Internet penetration and rapid developments in the telecom industry increasing the use of the Internet over smartphones in emerging economies such as India boost the growth of the security assertion markup language (SAML) authentication market. The rising trend for BYOD is creating opportunities for SAML solutions and is expected to take the market growth to the next level. However, this market growth is hampered by the limited awareness regarding the availability of identification and authentication protocols to prevent unauthorized enterprise access.

The security assertion markup language (SAML) authentication market has been segmented based on component, deployment, vertical, and region.

By component, the global security assertion markup language (SAML) authentication market has been divided into solution and service.

Based on deployment, the global security assertion markup language (SAML) authentication market has been divided into cloud-based and on-premises.

North America is expected to register the largest market share mainly due to the presence of industry key players such as Ping Identity (US), Amazon Web Services, Inc. (US), Okta (US), Oracle (US), miniOrange Inc. (US), OneLogin, Inc. (US), SSO Easy (US), SAASPASS (US), Auth0 Inc. (US), BIO-key International (US), and Microsoft (US) in the region. The US is expected to lead the market in North America due to the factors such as an increase in adoption of SAML authentication solutions, growth in IoT, BYOD trend in large and small organizations, and a rise in internal and external threats.

The European market for security assertion markup language (SAML) authentication is expected to stand at the second position during the review period mainly due to the regulatory compliance requirements and rapid economic growth across countries such as the UK and Germany. Additionally, the increasing number of cloud-based services are increasing the sensitivity of the information, which, in turn, is boosting the market growth.

Asia-Pacific is expected to be the third dominating region in terms of adopting security assertion markup language (SAML) authentication across industry verticals. Several business organizations store their sensitive information over the cloud, requiring a strong authentication system to handle identity and access management. The regional market has been segmented into China, India, Japan, and the rest of the Asia-Pacific. China is the leading country-level market, while India is projected to be the fastest-growing country during the forecast period. The Chinese market is expected to report the highest market share, owing to the factors such as a large number of users in an enterprise, making them essential to implement SAML authentication solutions and services. Additionally, India is witnessing an increase in the number of IT service providers in the country.

The Middle East & Africa and South America markets are expected to report significant growth during the forecast period attributed to the digital transformation across industry sectors.

The global security assertion markup language (SAML) authentication market is witnessing high growth due to the rising need for user authentication without multiple sign-in requirements. Major players have opted for partnerships, acquisitions, and product enhancement as their key organic growth strategies to enhance their positions in the market and cater to the demands of end users, whether it may be an employee in the organization or a customer. Additionally, the industry players are competing over the advancement of services offered, such as next-generation SAML protocol- SAML 2.0. Additionally, the providers offer Active Directory, which readily supports the Single Sign-on functionality.

The outbreak of COVID-19 in the early months of 2020 has hampered the industry’s normal functioning. Many verticals have shifted their working environments from physical to virtual for business continuity. The adoption of digital platforms during this pandemic situation has enabled organizations to run their businesses seamlessly but has increased their data and system vulnerabilities. Since the beginning of the pandemic, the number of cybercrimes has reported a surge. This has resulted in a higher demand for security solutions, including SAML authentication, to prevent unusual circumstances.

The key players in the global security assertion markup language (SAML) authentication market are identified based on their country of origin, presence across different regions, recent key developments, product diversification, and industry expertise. These include Thales (France), Ping Identity (US), Amazon Web Services, Inc. (US), Okta (US), Oracle (US), miniOrange Inc. (US), Zoho Corp. (India), OneLogin, Inc. (US), SSO Easy (US), SAASPASS (US), Auth0 Inc. (US), BIO-key International (US), RCDevs (Luxembourg), Ariel Software Solutions Pvt. Ltd. (India), and Microsoft (US). The key strategies adopted by most of the players are partnerships, acquisitions, agreements, and collaborations. 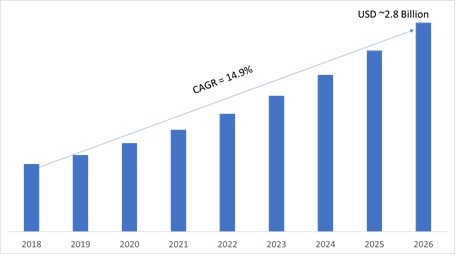 Increase In The Need For The Effective Management Of Bulk Identities Is Expected To Boost The Mar...