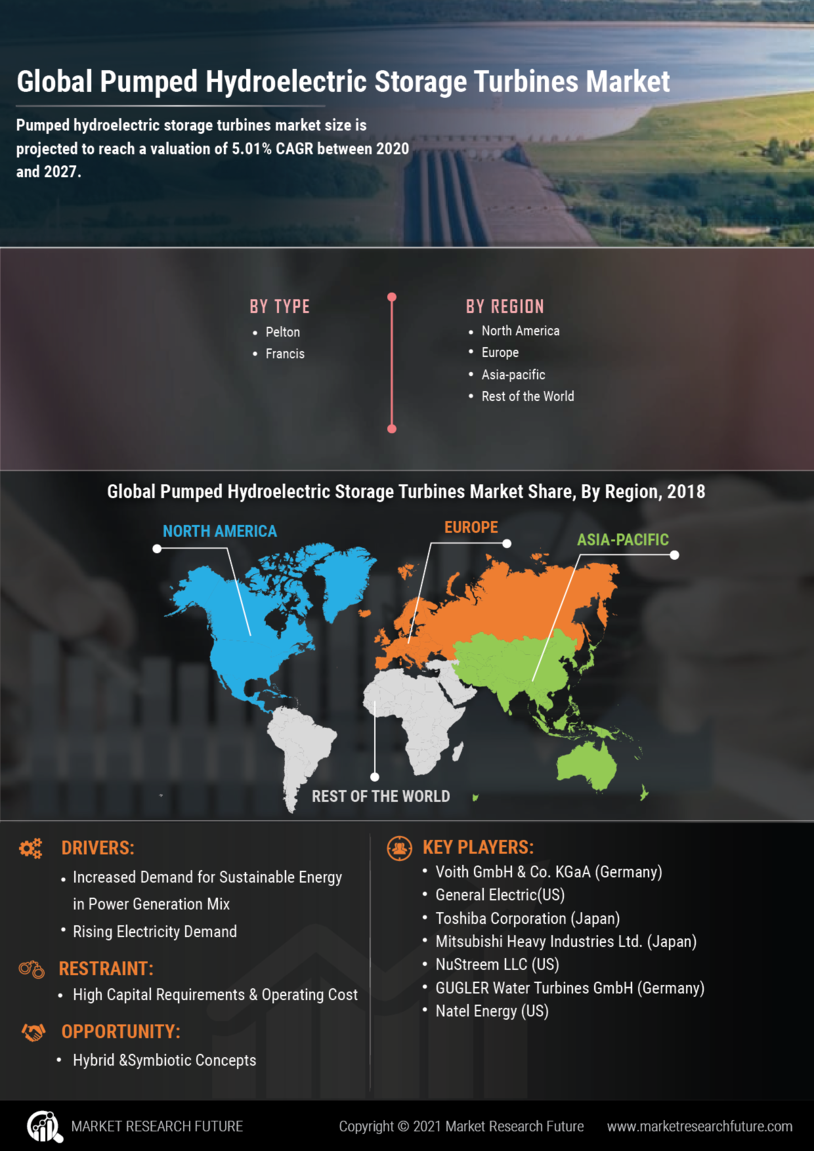 Pumped Hydroelectric Storage Turbines Market is expected to be valued at USD 5.6 Billion, with a CAGR of 5.01% Forecast by 2027

The Pumped Hydroelectric Storage Turbines Market will register significant growth in 2030 and hold a 5.01% CAGR until the forecast period.

people use Pumped hydroelectric storage to harness the energy of water flow in storage plants to generate electricity for load balancing. When there is high power demand, water is released through a turbine to generate renewable energy like electricity. Pumped hydroelectric storage turbines are needed to run the generators, and, hence, electricity is generated. Due to the increasing demand for sustainable energy in the power generation mix. Moreover, the increasing demand for electricity worldwide is expected to have consistent growth. The high operating cost and high capital requirement to install the hydropower generation is expected to hinder the market growth. During COVID 19, the focus shifted to renewable resources, which people use. However, the power plant control system operations was halted due to a lack of labour force. In the last few years, the growing industrialization and urbanization in various countries are increasing the demand for electricity which poses an accelerating factor for the market.

Pumped-storage hydropower (PSH) is a type of hydroelectric energy storage. These systems make use of hydropower turbines to generate electricity. In this configuration, two water reservoirs at different elevations are employed to generate power as discharge water moves down through a turbine to generate electricity. Additionally, it draws power to pump recharge water to the upper reservoir. The main principle behind the operation of pumped storage power plants is both simple and ingenious. They are used to store energy and generate hydroelectric power through turbines. Furthermore, if there is a surplus of power in the grid, the pumped storage power station switches to pumping mode, where an electric motor drives the pump turbines and pumps recharge water from a lower reservoir to a higher storage basin. If the demand for electricity in the grid rises, water is released from the upper basin, viz pressure pipeline to the bottom. The water causes the pump turbines to rotate, which operates in turbine mode, and the water is used to drive the generators. As a result, power is generated in seconds, and electricity is then fed into the grid.

Pumped storage is economically and environmentally the most preferred form of storing energy during base-load phases while making the energy available to the grid for peaking supply needs and regulation, as a result of which the global pumped hydroelectric storage turbines is expected to witness considerable growth over the coming years

Pumped hydroelectric storage turbines can help to meet the rising demand for electricity throughout the globe. However, the electricity demand had declined drastically due to covid-19 impact, thereby negatively impacting the hydropower generation, resulting in the limited installation of pumped hydroelectric storage turbines across the globe. Moreover, this unprecedented situation has created challenges in the technical and financial activities of the power sector. Hence, most of the utilities across the world were forced to cut their costs, including the cost of installing any new software in their power plants, which ultimately reduced the market of pumped hydroelectric storage turbines in 2020. For instance, French electricity consumption reduced by 15% owing to the pandemic. Generation is only provided by nuclear plants, hydropower, and other renewables in the country. The number of load variations in April 2020 doubled compared to previous years. This forced the operators to operate more flexibly, which is likely to affect the hydropower business in the coming few months due to a lack of profitability. This has directly impacted the global market.


Global energy demand has seen an exponential increase over the last few years due to rapid urbanization and a rapidly growing population across the world. Most of the energy produced across the globe is from fossil fuels, which produce harmful GHG gases on burningas per the International Energy Agency (IEA), as per the stated policies scenario, the global electricity demand is projected to grow ata rate of 2.1% per annum by 2040. Additionally,the share of electricity in the final energy consumption is estimated to rise from 19%in 2018 to 24% in 2040.The growing population, rapid industrialization and urbanization, and increasing infrastructure developmentare a few factors that are expected to increase the global electricity demand.

Additionally, as per the United Nations, the globalpopulation is expected to reach approximately 8.5 billion and 9.7 billion by 2030 and 2050, respectively. The growth in the world’spopulation results in increased electricity demand and consumption. Hence, it can be interpreted that with the increasing electricity demand, the need for electricity infrastructure is also expected to increase. Furthermore, according to the joint report of NITI Aayogand the Institute of Energy Economics Japan (IEEJ), under the ambitious scenario, India’s electricity demand was 805 TWh in 2012 and isexpected to rise to 5144 TWh by 2047. This is due to the increased use of electricity in residential, industrial, and transportation applications. Hence, the rising demand for electricity for power generation is expected to fuel the demand for pumped hydroelectric storage turbinesto generate electricity across the globe.


Hydropower generation through turbines requires high capital investments and has high operating costs. The higher capital costs are due to the larger structures, cost of wind turbines,and complex logistics of installing the towers for turbines. The costs of offshore / onshore foundations, construction, installations, and grid connection are further significantly higher as a result of which the pumped Hydroelectric storage turbine is expected to restrain during the forecast period

Furthermore, the operations and maintenance (OM) cost associated with hydropower generation accounts for 1.5 to 2 percent of the investment costs per year. Thus, the high capital requirements and operating costs involved in hydropower generation are expected to reduce the demand for pumped hydroelectric storage turbines, consequently hampering the growth of the global market during the forecast period.


Hybrid & symbiotic solutions such as the combination of pumped storage power plants integrated with wind and/or solar farms have become increasingly popular andessential for the generation and storage of clean, renewable energy along with the production of clean drinking water. In this innovative concept of combining wind power and hydropower, the upper basin of the reservoir is integrated into the foundation of the wind turbine towers. The hybrid solutions are likely to offer a reduction in planning and infrastructure costs and environmental impact as the two technologies use the same grid connection and switchgear.

Combining the technologies will create new trading alternatives which are not possible in a pure hydro or wind farm operation. Thus, it willexpand the potential of decentralized pumped storage, thereby providing opportunities in the pumped hydroelectric storage turbines market

The pumped hydroelectric storage turbinesmarketis classifiedbased ontypeand region. Bytype, the global market has been segmented into Pelton and Francis turbines.

The Pelton turbine segment is expected to hold a larger share in the global market during the forecast period. A Pelton wheel turbine is a hydraulic turbine, and its primary application is in the hydropower plant for producing electricity.

The global pumped hydroelectric storage turbinesmarkethas been segmented into five major regions, namely, North America, Europe, Asia-Pacific, the Middle East & Africa, and South America. The pumped hydroelectric storage turbinesmarket in Asia-Pacificis estimated to account forthe highest share of the pumped hydroelectric storage turbines market. The region is one of the largest markets for energy consumption in the world. There is an increased demand for energy in Asia-Pacific because of the growing population and rising per capita disposable income. Furthermore, the rapidly growing economies in this region are also the leading polluters in the world. Moreover, Asia-Pacific is estimated to showcase significant growth owing to the abundant availability of natural resources in the region. Emerging economies such as India and China promise sizeable growth due to proposed government legislation to increase investments in the renewable energysector.Additionally, most of the countries in the APAC region have abundant seashores, which is also expected to support the growth of the market in the region during the forecast period.

The impact of COVID-19 on the worldwide economy is changing every day. It is proving to be a big challenge for the renewable industry, resulting in a shortage of raw material supply and impending job losses. In the energy & power industry, companies are dealing with several challenges due to a decline in electricity prices post the COVID-19 outbreak. Moreover, the US is one of the largest markets for pumped hydroelectric storage turbine generation. The slowdown in the country’s economic growth has affected the overall generation and renewable energy investment globally. Similarly, during the COVID-19 crisis, there has been an increased focus on renewable technologies; however, fewer power plants were working due to labor constraints.

According to the Ministry of New and Renewable Energy (MNRE) reports, in India, only ~25 MW of wind capacity was achieved in March as all activities have come to a halt due to the pandemic. COVID-19 has led to severe impact across all the industries around the world. The rapid spread has led governments across the globe to take stricter actions for the operations of industrial plants and offices, leading to stricter lockdowns. The lockdown had a notable impact on the energy sector overall as energy demand had decreased around 18% to 20% in 2020. Moreover, the virus also significantly impacted the hydropower sector, with a moderate impact on the operation and installation of new hydropower plants. The impact was in terms of a slight decline in revenues and a challenging situation with managing the cash flow of the market players.

According to the International Monetary Fund (IMF), economic uncertainty due to the COVID-19 outbreak is much higher than the past outbreaks, such as severe acute respiratory syndrome (SARS), avian flu, swine flu, bird flu, and Ebola, owing to the escalating number of infected people and uncertainty about when the crisis is likely to come to an end. If the pandemic uncertainty lasts longer, then the world merchandise trade is expected to decline steeply initially with a more prolonged recovery, which is expected to affect households and businesses severely.

The report for the global pumped hydroelectric storage turbinesmarketof MRFRresearch covers extensive primary research. This is accompanied bya detailed analysis of qualitative and quantitative aspects by various industry experts and key opinion leaders to gain deeper insights into the market and industry performance. The report gives a clear picture of the current market scenario, including the historic and forecasted market size in terms of value and volume, technological advancement, macroeconomic, and governing factors of the market. The report provides comprehensive information about the strategies of the top companies in the industry and a broad study of the different market segments and regions.

At what CAGR is the Pumped Hydroelectric Storage Turbines Market predicted to grow during the forecast period?

Pumped Hydroelectric Storage Turbines market is predicted to grow at 5.01% through forecast period of 2022-2030.

What is the forecast period of Pumped Hydroelectric Storage Turbines market research report?

What are the key factors driving the Pumped Hydroelectric Storage Turbines market?

The rising demand for electricity across the globe is also expected to contribute to the growth of the Global Pumped Hydroelectric Storage Turbines Market during the forecast period.