Globally, it was found that the offshore mooring system market expanded USD 1,436.40 million at a market value of a CAGR of 3.80% during the market forecast period.

Since the last years of market growth, it was found that the market size expansion took place in the upcoming years. The mooring system comprises the connectors, anchors, and mooring lines. It is in high demand in ships or floating platforms to keep it constant at all levels of water. Anchor and the mooring line are highly advantageous and make the ship connected to the ship floor. Moreover, wire, chain, and synthetic rope make the mooring line which provides huge strength to the mooring system. The properties and the depth of the soil raise the holding capacity of the offshore mooring system.

The outbreak of the pandemic had a tremendous impact on nationwide people. This pandemic hampered the supply chain of the mooring systems. It even affected the transportation facilities thus decreasing the trade movement. COVID had a great impact on consumer behavior. The economic growth of the offshore mooring system industry was disrupted.

the major role played by the key players like merging eight automation, and the use of information technology helps in driving up the market size. The mooring system so invented helped in lessening the efforts of the humans and taking all of the safety measures.

Increase in production and exploration of oil along with the gas in the offshore fields rise the growth of the global market. The development of off-shale activities in the North American region brings opportunities for rising offshore mooring system market growth. Development of some of the vessels, which involves in production floating purposes and for drilling, raised the business expansion. The vessel mooring system is enhanced by some factors like rising subsea exploration activities, drilling, storage activities and offloading, and many more. The mooring system is fueled up by subsea exploration activities. Funding in the market rises the growth of the mooring industry. A rise in drilling activities of the offshore mooring market whereas the platform raises the requirement of the system links up towards rising market size.

Lack of technological ideas among the market players pushes down the growth size. The high growth in the market complexities and the regulations so put forward have influenced the expansion of offshore mooring system market size. The regulations and the strict laws so enforced for recovering preparedness and tracking along with development in the market benefit the market size. Carrying out more research activities by some of the market players helped in the development of the systemic industry thus becoming a major challenging factor for growth.

It was during the base period when certain inventions took place which increased the offshore mooring system market value. 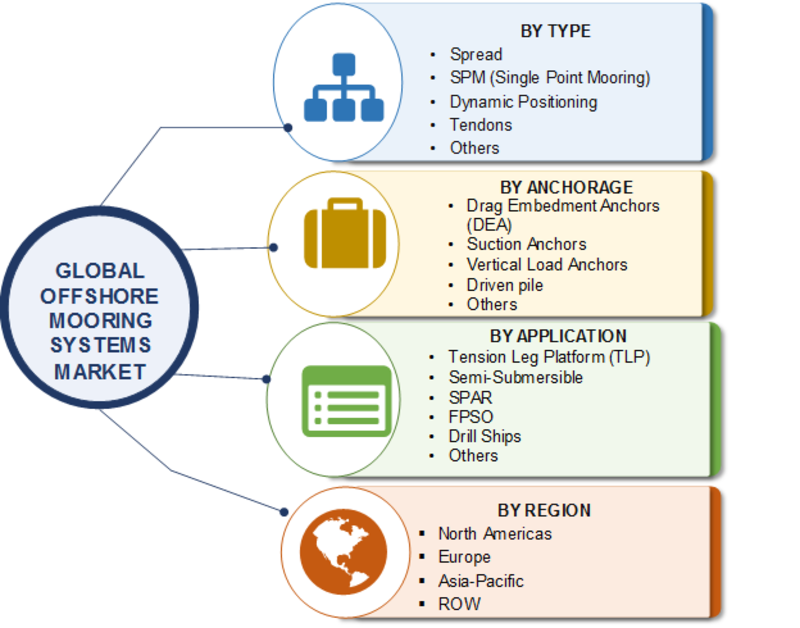 Globally, the offshore mooring market has been classified as per the type of the mooring product, anchorage, and applications. The segment type is divided into the spread, SPM, dynamic positioning, tendons, and many more. The segment of anchorage is classified into Drag Embedment, Anchors(DEA), driven pile, vertical load Anchors, and many more. Moreover, the application part has been classified into Tension Leg Platform, ships drills, SPAR, FPSO, semi-submersible, and many more. Based on type, the market covers a huge market share in the year 2017 whereas it maintains its position till the end of the forecast period. These mooring appliances are to be used in terms of various ranges like mobile offshore drilling elements. Based on anchorage, the industry has been classified as Winton drags Embedment Anchors, driven pile, anchors of the vertical load, anchors of suction, and many more. The anchor suction covers a huge offshore mooring system market share in the forecast period whereas it is projected where it experiences an exponential market share from the year 2018 to 2023. Hereby, the price of the system is less and reasonable and is very much safe.

High development in technology and utilizing wind and wave energy have helped in spurring up the market growth. The technology led to the innovation of certain products.

High growth in population takes place in the region of  China and India, there is a growth in energy which is dominating the offshore mooring system market. It was marked that the region was divided into North America, European region, Asia Pacific region And some region in the rest of the world.

The Asia Pacific region covered the largest part of the world which was followed by some of the North American and European regions. This is due to the presence of high growth of public and rise in growth in energy along with environment-friendly energy. The Asian region has experienced a strong market share. In the year 2018, the Chinese region was said to cover a dominant part of the market share. India experiences maximum growth during the review period. North American and European regions convert a huge area and are marked to be the second and third-largest market. These markets cover a steady and exponential market growth. Globally, the market covers s CAGR of 4.7% during the assessment period.

What would be the CAGR for the offshore mooring systems market during the forecast period (2022-2030)?

What could hold back the offshore mooring systems market growth?

Which type of anchorage is dominating the global offshore mooring systems market?

What are the advantages of the mooring systems?

It provides good support to the anchorage of the ships along the floating vessels and the platforms around all kinds of water depths. Globally, the offshore mooring systems industry is very much competitive having a large number of key players, throughout the globe. These key layers have adopted certain planning strategies for expanding their business globally and rising their foothold in the market. Some of the strategies adopted by different market players consist of expansions, investment along with acquisitions, and developing a new product.

What is some other restraining factor?

Its high maintenance costs, its high replacement costs and regulations, and the laws so related to the mooring systems.

How is the market segmentation so done based on the mooring type?

As per the product type, the market has been classified into Spread Mooring, dynamics positioning of the tendons, single point mooring, and tensional mooring systems. These moors are most typical and are and are used in platform activities thus ranging from units dealing with mobile offshore and also about the catenary systems. Spreading mooring system is very much common in those appliances where its longevity is increased, can be used at any water depth, and is used for different vessel sizes. They are popularly used in one-directional environments and are also used in the flooring of offshore structures