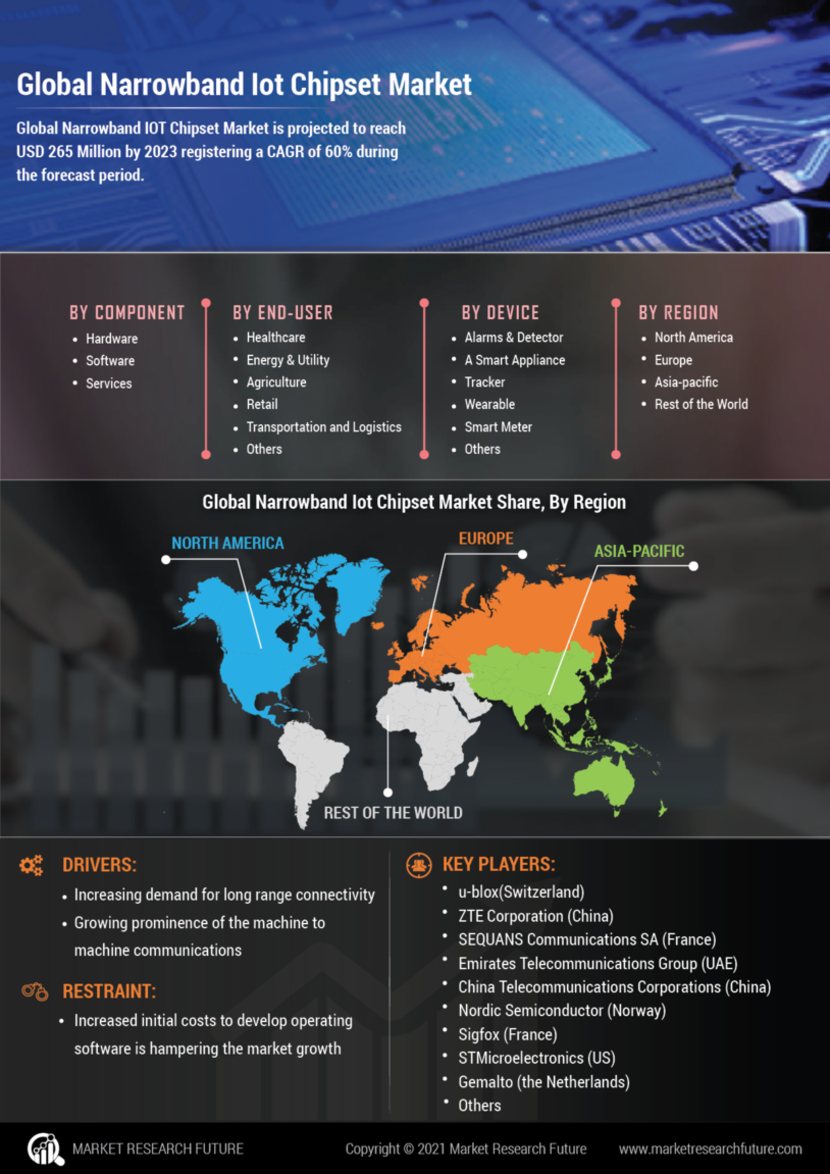 Narrowband IoT (NB-IoT) chipset market is estimated to reach USD 265 million at CAGR 60% through the forecast period 2023. Narrowband Internet of Things (NB-IoT) is a wireless technology which allows several devices to connect across cellular telecommunication bands. Due to this low power technology, it is majorly deployed in devices operating at low data rates. The major advantages of narrowband IoT chipsets can be deployed as a simple addition of new software to the existing LTE infrastructure, leading to fast development, global roaming, and economies of scale and many others.

NB-IoT chipsets consume less amount of power and are deployed in various applications such as smart meters, facility management services, fire alarms, tracking of persons, connected industrial appliances and many more. When compared to LTE- M1, NB-IoT chipsets has lower bitrates and better link budgets. NB-IoT chipsets can directly connect sensors to the base station which boosts flexibility while lowering costs.

The increasing demand for long-range connectivity and growing prominence of the machine to machine communication are driving NB-IoT chipset market. The market is fuelled by chipset factors such as power efficiency, flexibility, and wider deployment. However, increased initial costs to develop operating software is hampering the market growth.

Which segments are assessed in the report on the basis of component?

By component, the narrowband IoT chipset market has been segmented into services, software and hardware.

At what amount is the narrowband IoT chipset market expected to be valued by 2027 end?

The NB-IoT chipset market is expected to earn revenue worth USD 265 Mn by 2023.

Which region is supposed to lead the global market and why?

North America is supposed to drive growth of the global narrowband IoT chipset market due to early adoption of the technology.

At what CAGR is the narrowband IoT chipset market expected to expand?

The market is assessed to register 60% CAGR over the review period.

By application, what are the sgements of the narrowband IoT chipset market?

The narrowband IoT chipset market, by application, has been segmented into Alarms & Detector, Tracker, Wearable, Smart Appliance, and others.