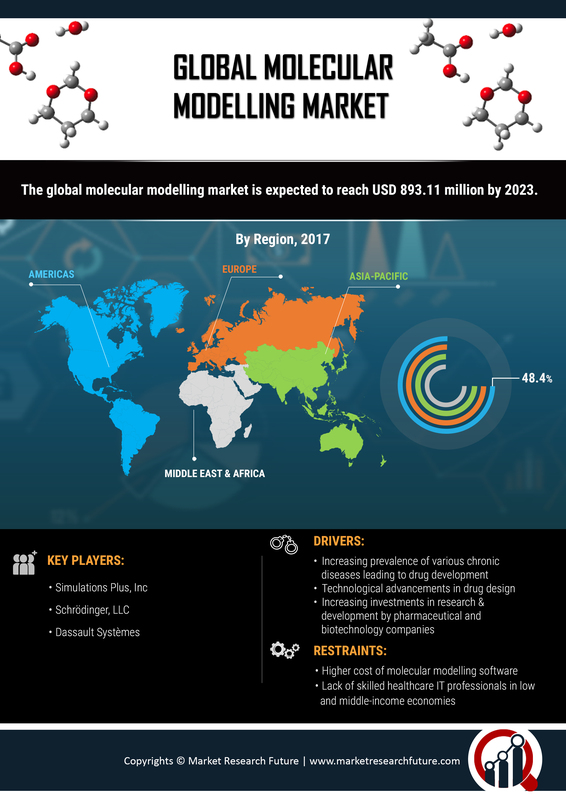 The molecular modelling market is anticipated to reach USD 13,500 Million by 2030 at 12.50% CAGR during the forecast period 2022-2030. People use molecular modeling software to create 3D computer simulations of molecules in terms of structure and nature. This is invaluable because it allows them to manipulate these molecules. They can then understand how different drugs would react with humans. This is far more effective and safer than testing medicines on lab animals.

Molecular modeling software used to be used when developing new drugs and testing them for potential side effects. However, since it’s so useful, it’s now being used in computational chemistry and materials science work and projects.

COVID-19 first appeared in the world in the spring of last year. At first, this virus seemed to be nothing more than a nuisance. However, some people who got it had to be hospitalized, and a very small percentage of these people died from it. Additionally, people who recovered from it could get it again since the antibodies were short-lived. They could also suffer from long-term side effects like diabetes and partial brain damage.

Many companies found it hard to get the materials and find the programmers needed to make molecular modeling software.

More and more scientists and researchers are using molecular modeling software to test the efficiency of drugs. They find that this is a cost-effective and safer way to bring new drugs to market faster.

Another factor that is driving growth in the molecular modelling market is the fact that more and more people around the world are suffering from chronic long-term diseases like diabetes, Alzheimer’s, and cancer. Only effective and powerful pharma drugs can effectively treat these.

The biosimilars and biologics industries are growing fast. This has been a major factor that has driven growth in the molecular modelling market in recent years.

The fact that the global molecular modelling market has a high CAGR is many enticing companies in the pharma and biotech industry to invest heavily in research and development. This has led to the creation of a new generation of powerful drugs that are more effective than their predecessors and can sell at higher prices.

One challenge that pharma and biotech majors will have to overcome lies in finding an effective way to raise more funds faster.

The CAGR for the global molecular modelling market is 15.16%.

Stardrop is a suite of programs that uses the latest in silicon technologies to allow users to create accurate simulations of certain molecules. This allows companies to make more effective and powerful drugs and related products faster and at a lower cost.

There are many applications for molecular modeling software. Some of these are:


The drug discovery segment can be segmented further into direct drug design, indirect drug design, and molecular mimicry. The customers are research centers and agencies, academic institutions, pharma and biotech companies, and others.

There are four major regions for the global molecular modeling software market. These are;

The North American region held the lion’s share of the molecular modelling market in 2015. This is expected to continue until at least 2027, given the fact that most of the major pharma and biotech companies are located either in America or in Canada.

Many major companies have entered into strategic partnerships. This has allowed them to invest even more in research and development. The result has been amazing because this has allowed them to produce a new generation of more effective and powerful drugs. These drugs are produced according to stringent national and international standards.

To use an example of a strategic partnership, the American Diabetes Association (ADA) has entered into a strategic partnership with Entelos Inc in terms of research. The objective is to invest even more into research and development efforts to try to come up with a new generation of more powerful and effective drugs to treat diabetes with fewer side effects.

Instead of experimenting with these drugs on lab animals, these companies can use molecular modeling software to understand how these drugs would interact with each other and with the human body.

The Asia-Pacific molecular modelling market is expected to have the highest CAGR of all of the regions in the world for the forecasted time period. This is largely fueled by the establishment of contract research organizations (especially in countries like India and Singapore.) Governments in the Asia-Pacific region are also becoming much wealthier. This has allowed them to spend more on healthcare. They are financing projects that use molecular modeling software much more often, and the results are amazing. The biotech and pharma companies in this region are able to produce a new generation of more powerful and effective drugs with fewer side effects.

Another factor that is driving growth in the Asia-Pacific region is the fact that healthcare infrastructure and standards are changing for the better.

The global molecular modelling market is very competitive despite higher barriers to entry. The relatively high CAGR combined with a high return on investment (ROI) in terms of drugs introduced to the market is enticing bigger companies to enter into the market. This is especially true of pharma and biotech companies.

As more and more companies enter the market, established players find that the only way that they can be successful is if they invest heavily in research and development. This will allow them to create and sustain a competitive advantage by allowing them to create a new generation of innovative and powerful new drugs that are more effective and have fewer side effects.

Companies are also finding that they must enter into strategic partnerships and merge with/acquire other companies to succeed with strategic partnerships. They can increase the total monetary resources they can allocate for research and development by ‘pooling the funds’ of the companies in the partnership. This allows them to produce drugs that are better, more effective, and safer in less time.

Strategic partnerships also allow companies to strengthen their position in existing markets. It allows them to enter new markets on a strong footing. Both of these can result in much more sales revenue for the companies.

The global molecular modelling market is growing at a CAGR of 15%. The increasing prevalence of chronic diseases is fueling the growth. Many governments are also investing heavily in research and development. This is allowing them to support large corporate projects that are devoted to developing a new generation of more powerful and effective drugs with fewer side effects.

What would be the CAGR of the Molecular Modelling Market during the forecast period of 2022-2030?

Molecular Modelling Market predicted CAGR would be 12.50% during the forecast period of 2022-2030.

What are the product types discussed in the Molecular Modelling Market report?

The types are software and services.

Which segment is leading the Molecular Modelling Market?

The software segment is dominating the Molecular Modelling Market.

Which application segment would dominate the Molecular Modelling Market?

The drug development segment would dominate the Molecular Modelling Market with a projected valuation of USD 13,500 Million.

Which end user segment would drive the molecular modelling market ahead?

The pharmaceutical and biotechnological companies would head Molecular Modelling Market.

Many small and large companies are engaged in the global molecular modeling market. Through extensive research, it is found that market players have adopted strategies of product launches, acquisitions, and collaborations. Based on the market study, we found some key players operating in this market which are Simulations Plus, Inc, Schrödinger, LLC, Dassault Systèmes, Chemical Computing Group, OpenEye Scientific Software, BioSolve-IT, Cresset, Optibrium, Cambridge Crystallographic Data Centre, Acellera Ltd, Certara, L.P, and others.

Simulations Plus, Inc is one of the leading players in the market with a huge global presence and strong product range. The company has a significant presence in the Americas, Europe, Asia-Pacific, and the Middle East and Africa. Furthermore, the company is capturing emerging markets by launching new products. The company is one of the premier developers of modeling software used in drug research by major pharmaceutical, biotechnology, agrochemical, and food industry companies and provides a license to these software. Major products from the company include gastroplus, ADMET predictor, NAFLDsym, and PBPKPlus. The company is using acquisitions and collaborations as strategies to expand its business scope and penetrate the untapped markets. Moreover, the company is focusing on increasing its business area through inorganic growth strategies.

Last year, Simulation Plus, Inc. acquired DILIsym Services, Inc. which is a leading provider of Drug-Induced Liver Injury (DILI) modeling and simulations software and contract research services. After the Agreement, DILIsym has become a wholly owned subsidiary of Simulations Plus and will continue to operate under the DILIsym name. DILIsym comprehended the revenue of over USD 3 million in 2016 and the business is expected to grow in the near future.