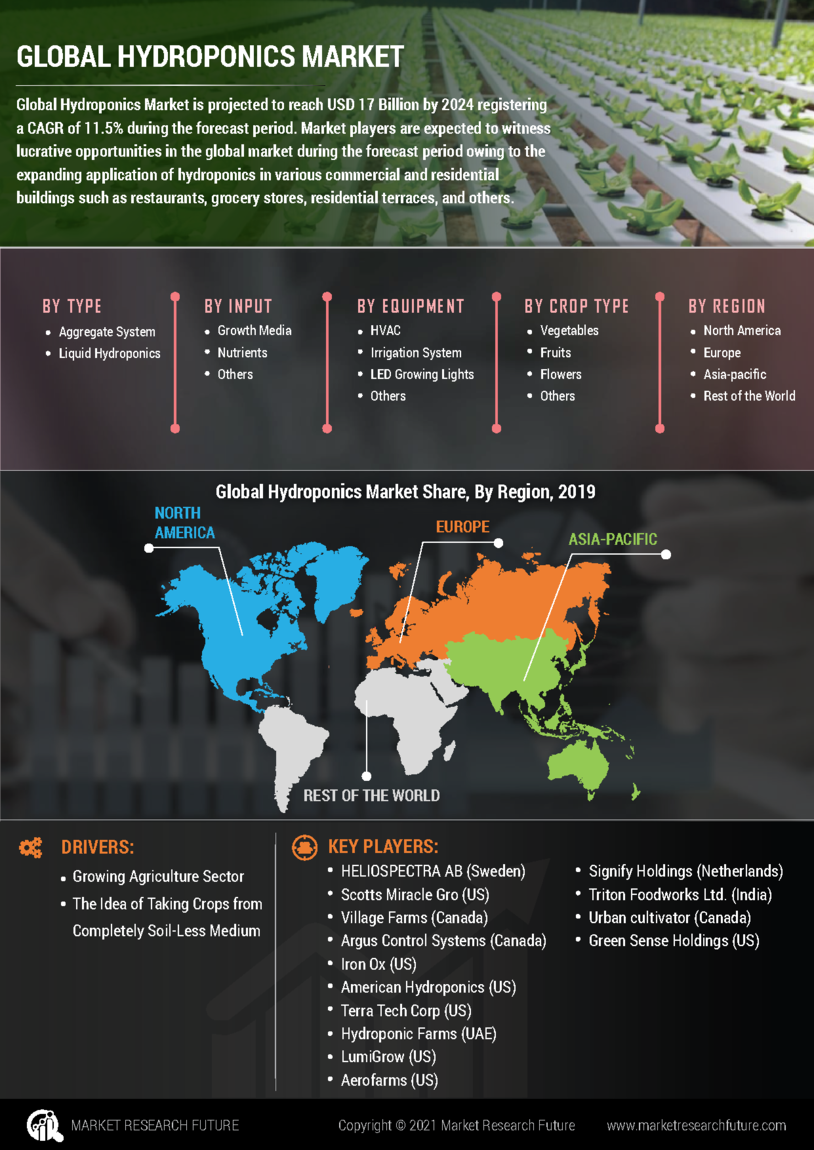 Hydroponics market size is expected to garner a revenue of USD 8.9 billion by 2030, with a CAGR of approximately 13.45% during the forecast period, 2022-2030. The rising pressure on the agriculture industry to meet the growing demand for grains and food in the Hydroponics Market scenario leads to the divergent search for high-yielding farming techniques, such as precision farming and urban farming. Hydroponics is thus, being looked upon as a potential solution for solving the issues followed by the growing concern about food security in the coming years, as a part of the global forecast period.

The obnoxious spread and outbreak of the novel coronavirus disease and its recognition as a pandemic by the WHO has not only created havoc and distress in the minds of the global target audience, but it has also developed a major degree of challenges and issues for the healthcare services and service providers to deal with and conquer the issues and roadblocks, subsequently. However, Hydroponics Market rise in consumption of snacks, appetizers, and others has increased since the pandemic has hit as people are staying at home. One of the major reasons behind this is the lockdown that has been followed which has forced the global target audience to sit back at their places and further, opt for alternate means that will help to keep themselves busy and do something productive to stay busy. With the increase in consumption of snacks like chips or fried food items, hydroponics is considered important as it is important to have the intake of these for a balanced diet and functioning.

Post the pandemic, the demand for the vitamin and mineral test is likely to increase as the global target audience has started taking their health seriously followed by their intake of food items and supplements that will help in enhancing their diet and immunity, in the long run, to deal with health issues and diseases. The global market players and governments alongside the public sector are increasing the investments and funds that give rise to the research and development activities that fuel the Hydroponics Market trends during the ongoing forecast period.

According to the stats of the circulated UN reports on the global population chart, the plants that are grown in hydroponic systems have achieved a 20%–25% higher yield than the traditional agriculture system, with its productivity being a minimum time 2–5 times higher. Also, owing to the propelling need for controlled environmental conditions, the effect of climatic changes can likely be balanced with the help of these systems, thereby not affecting the annual crop production that the farmers and other associations expect. The CEH techniques directly affect the crop harvest cycle. Since climatic changes show a minimal effect on such functional systems, the crops can be produced all year round, thereby again increasing the produce.

However, the hydroponics market trends are witnessing the emergence of factors such as the high cost that is associated with the conducting of hydroponics farming. Also, the limitations of the tests like false positives and false negatives alongside the lack of awareness that is prevailing in the developing countries are expected to restrict the market growth during the forecast period.

The existing players of the Hydroponics Market are laying their focus on the development of a constant degree of innovation followed by mass-up-gradation for the product portfolio of the market. The technological ideas and employment in the global market premises id giving rise to efficiency in the product offerings that result in a better and accurate testing outcome for the crops that are located in various global locations. With the rising increase in the adoption of hydroponics globally, the manufacturers and researchers are working on improving the degree of efficiency of hydroponics technology to increase the quality and quantity of the produce.

To Hydroponics Market report, have a detailed analysis of the impact of the pandemic on the market operations and the market dynamics in the form of the market growth drivers and opportunities, that will help the market recover the losses that have been witnessed during the pandemic year of 2020. Also, the report helps to understand the factors that stimulate a demand that goes well with the expansion predictions as laid down by the market leaders and business chiefs for the forecast period.

To hydroponics market report aims to study the revenue earning potential that is held by the market segments which will lead the market operations during the period and hence, grow as per the predictions. The report further conducts a deep discussion of the ability of the segments to fulfill the demand of the target audience that is spread in various global locations.

The report aims to draw a competitive graph amongst the prominent players of the Hydroponics Market based on the market factors that will help in understanding the scope of the players to emerge as international competition and trendsetters during the forecast period.

The hydroponics market analysis highlights the rising responsibility of the global market segments to earn better revenues that will help in increasing the chances of the market to grow as per the predicted revenue by the end of the period. The market has been segmented based on the following factors in the global market premises:

The hydroponics market has been segmented as follows:

The Hydroponics Market has been segmented as follows:

The market has been segmented based on the input and includes the following:


Based on crop type

The hydroponics market has been segmented based on the crop type as follows:

The global market segmentation based on the region is as follows:

The European region and market are likely to emerge as the dominantly growing region in the international market premises. In the Netherlands, the growers that are farmers mostly cultivate their plants in simple tunnel-like greenhouses without involving the use of climate control technologies. There has been a good degree of advancement in greenhouse farming that has supported the growth of hydroponics in Europe.

The North American market consists of the US and Canadian markets which are increasing the population and so has been a rise in the demand for food and other grains. This will drive the market towards growth in the period.

The rising competition and chances for the market to rise as per the predictions for the forecast period is prevalent because of the prominent role of the following prominent players of the Hydroponics Market:

According to national government statistics that have been released, the rising degree of adoption of hydroponics has been witnessed to be the highest across all European countries. Thus, the Hydroponics Market is highly developed in the region.

The growing awareness and research for vitamins and their benefits on health influence the market growth in the European region.

Many prominent companies in the global market are investing heavily into R&D activities for obtaining state-of-art technologies that boost production and also bring about a variety of cultivations possible. Also, the market is home to strategic partnerships with research labs and institutes further drive the growth of the hydroponics market.

At what CAGR is the global Hydroponics market projected to grow in the forecast period (2022-2030)?

Hydroponics market is projected to grow at approximately 13.45% CAGR during the assessment period (2022-2030).

How much is the global Hydroponics industry worth in the future?

Hydroponics market is estimated to reach a valuation of approx. USD 8.9 BN by the end of 2030.

Who are the top players in the global Hydroponics market?

Which region holds the largest share in the global Hydroponics industry?

What are the major tailwinds pushing the growth of the global Hydroponics market?

The rapidly growing agriculture sector and the idea of taking crops from completely soil-less medium are major tailwinds pushing the growth of the global Hydroponics market.

Global Hydroponics Market is projected to grow at a CAGR over 13.45% post 2030