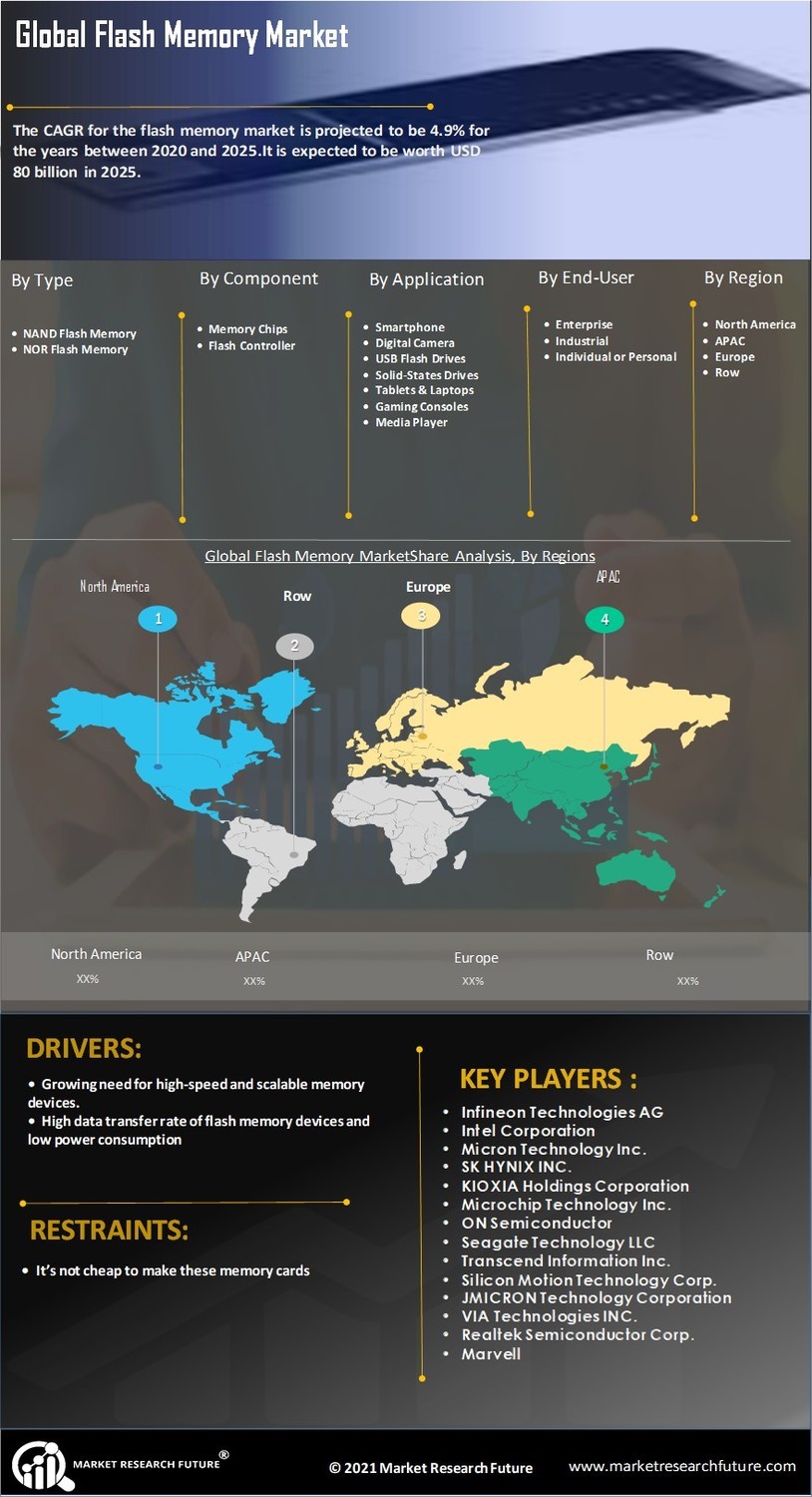 People use flash memory cards when they want to record information and data but don’t have access to a reliable power supply. It can be considered to be a safe way to store vital computer-generated information and data as well. Flash memory was created when the first computers were in the 1940s. It has evolved over the decades as computers and various mobile digital devices have evolved.

Flash memory is currently used to back up information and data on many devices - digital and otherwise. Their use is not just confined to computers anymore. In fact, the flash memory market is expected to be one of the few markets to register significant and noticeable growth during the COVID-19 induced global recession.

COVID-19 proved to be dangerous when it became a global pandemic last year. Most people recover from it but a few people got deathly sick. Governments around the world began to notice that this was a deadly virus and they began to act with temporary quarantines and lockdowns. These had limited effect, many industries and markets were negatively affected.

Governments around the world realized this. That’s why they imposed quarantines and lockdowns. These were temporary and had limited success. Many industries were negatively affected. Many companies that used flash memory cards in a variety of industries were forced to either temporarily halt or dramatically slow production down. This created less of a demand for these cards. Also, manufacturers of these cards found the raw materials needed to make these memory cards hard to come by. This raised the cost of manufacturing these cards. The manufacturers were forced to pass these costs onto the final consumer in the form of higher retail prices.

Many more people around the world are growing richer. In fact, many developing nations have a growing middle class. They want better computers, digital devices, and other forms of consumer electronics. This has created a need for more sophisticated and better flash memory cards with more storage ability and more affordable payment plans.

The flash memory market is experiencing a healthy CAGR which is expected to continue for at least the next few years. Manufacturers of flash memory cards are realizing that the market is very lucrative. That’s why they’re spending millions in research and development in the attempt to develop the next generation of memory cards that are more efficient at storing information and data and are capable of storing much more information and data than their predecessors.

Perhaps the biggest challenge that manufacturers in the flash memory market will face going forward lies in continuing to make more advanced flash memory cards that can store even more information and data while keeping prices at a reasonable range for consumers.

IM Flash is an American company. It’s the result of the marriage between two American tech giants:  Intel and Micron. It exists to do extensive research and development in the flash memory market. Thus far, its efforts have been successful. IM Flash has, to date, developed the 3X Point. This is a memory chip that’s able to record far larger quantities of information and data without needing a transistor. It can be considered to be a pioneer in the global flash memory market because it’s the first chip that operates without a transistor.

The flash memory market can be grouped into the following sub-segments based on type:

The NAND flash memory sub-segment has most of the market share in the type segment at 73.68% as of 2019. A CAGR of 5.20% from this market is expected from 2020-2025. Flash memory is stable. It’s also referred to as flash storage. It organizes data and information into units based on the similarity of data and information. These flash memory cards are then able to erase existing data and rewrite it on the same card. This helps many businesses become much more productive.

It’s so effective at storing, retrieving, erasing, and rewriting data that it’s used widely in devices and companies that need to store and transfer important bits of data. Many manufacturing companies use these chips because of these features as well.

NAND flash memory plays an important role as a catalyst in terms of dramatically improving and accelerating the output of devices that are Input/Output based.

NOR Flash memory is used in devices and systems that use embedded chips. The reason being that it’s easy for these systems to retrieve, read, and interpret the information and data that these memory cards store. It can also do this at a much faster pace than NAND flash memory cards can. That said, NOR flash memory cards are more expensive mainly because they have greater capabilities and efficiencies.

The flash memory market can be separated into the following regions:

The flash memory market remains highly competitive. One of the factors that account for this is its relatively high CAGR. Flash Memory Market is also very lucrative and has few barriers to entry. Established companies in similar industries with huge treasuries and cash resources have no trouble entering the market. It’s this competitive nature that makes it difficult for companies to stay financially viable. They generally have to do one or more of the following to thrive in this ruthless market with cut-throat competition:


Companies that invest heavily in research and development end up extending their product horizons by creating a new generation of more competitive flash memory cards. These products have many more useful and innovative applications than their predecessors did. Therefore, they are in much higher demand. It’s also new product development through extensive research and development that allows companies to justify charging people much more for these products.

Companies increase their resource pools when they enter into strategic partnerships with other companies. Some of the companies that are formed as a result of the strategic partnership exist solely to do the quality research and development that will lead to more innovative products that are more efficient and effective at transcribing, storing, retrieving, and rewriting large quantities of data and information.

Intel Corporation is an American company. It has managed to retain its superior market position by investing heavily in research and development. This has enabled it to develop a new generation of more effective memory flashcards with far more innovative uses.

What are major drivers of the global flash memory market?

What can restrain the global flash memory market growth?

Which region can lead in the global flash memory market?

APAC can lead in the global flash memory market.

Who are the prominent manufacturers of the global flash memory market?

What are prime strategies of players to sustain their standing in the global flash memory market?

Launch of new products and acquisitions are prime strategies used by players in the global flash memory market.