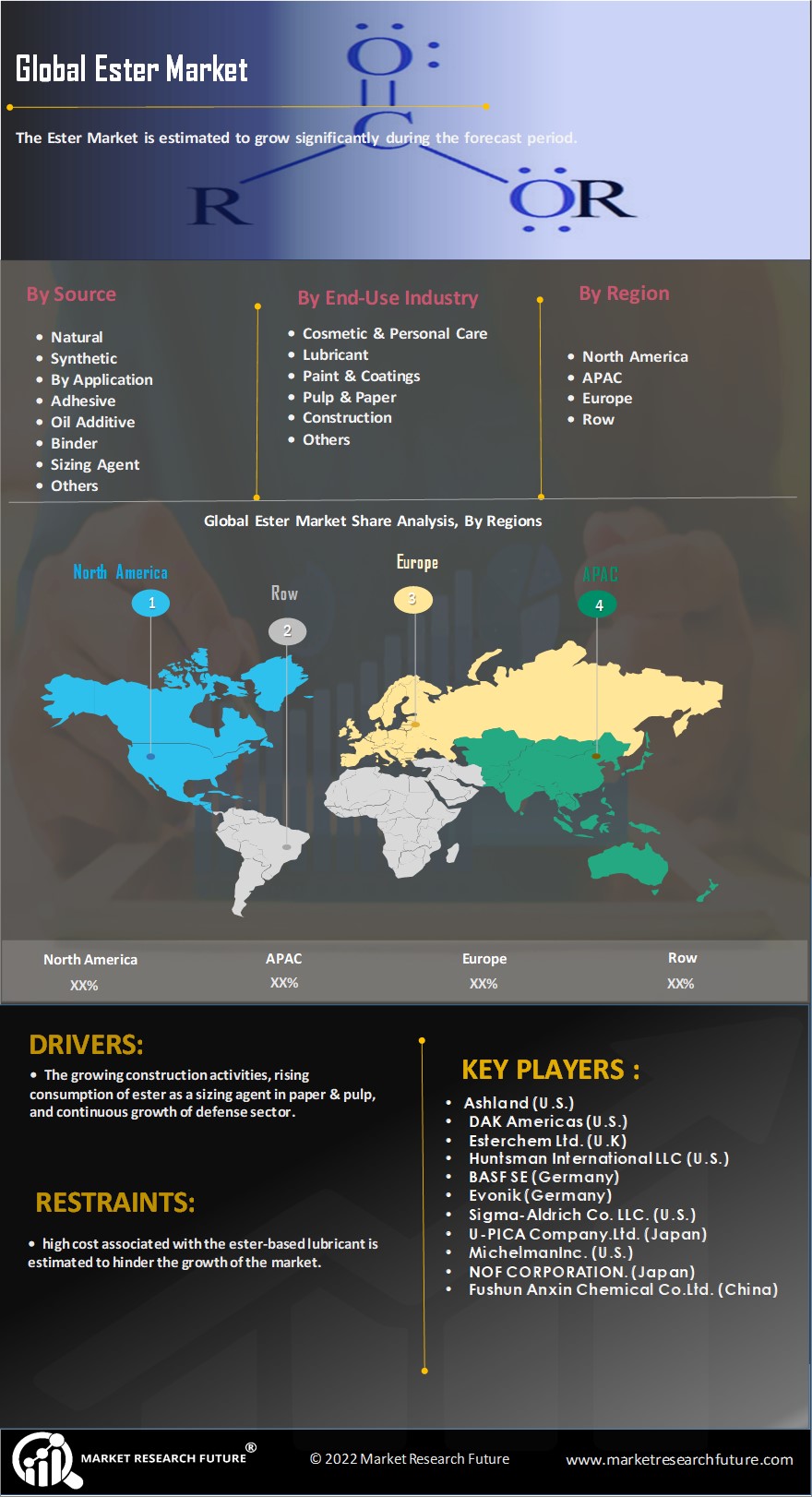 Ester Market Overview Ester Market is projected to be worth USD 127.45 Billion by 2030, registering a CAGR of 5.25% during the forecast period (2021 - 2030). Ester is a non-hydrocarbon chemical compound formed by the interaction of carboxylic acid with an alcohol. It can be obtained either naturally or synthetically. The naturally occurring ester is primarily generated from seed oils like rapeseed, soya bean, and sunflower. Synthetic esters have a low pour point and great oxidation stability, making them useful in a variety of applications such as oil additives, adhesives, sizing agents, and binders. It is then utilized in a variety of end-use sectors, including lubricants, paints and coatings, pulp and paper, cosmetics and personal care, construction, and so on. The global ester market is driven by expanding construction activity, increasing demand for the ester as a sizing agent in paper and pulp, and the defense sector's continued expansion. Furthermore, increasing mining-related activities leads to increased explosives usage, which is expected to fuel nitrate ester demand over the assessment period. Over the forecast period, demand for the ester is expected to be driven by expanding population and rising consumption of packaged food and beverage. Furthermore, in the textile business, several forms of ester are utilized as a textile finishing agent or binder. As a result, the worldwide ester market offers a profitable prospect thanks to the textile industry's continued growth.Key Players

Ester is a non-hydrocarbon organic substance that is derived from the reaction between carboxylic acid and alcohol. It is obtained by either natural means or by synthetic means. Naturally, the occurring ester is predominantly derived from seed oils such as rapeseed oil, soya bean, and sunflower oil. Synthetic esters have excellent oxidation stability and low pour point, which can be utilized in a wide range of application such as oil additive, adhesive, sizing agent, binder, and others. It is finally used in numerous end-use industries such as lubricant, paint & coatings, pulp & paper, cosmetic & personal care, construction, and others.

As per the analysis, some of the noticeable market factors and trends identified in the global ester market include the growing construction activities, rising consumption of ester as a sizing agent in paper & pulp, and continuous growth of defense sector. Furthermore, increasing mining-related activities leads to the higher consumption of explosives, which, in turn, is predicted to fuel the demand for nitrate ester over the assessment period. Increasing population along with rising consumption of packaged food & beverage is estimated to drive the demand for ester over the forecast period. Moreover, some of the types of ester are used as a textile finishing agent or binder in the textile industry. Thus, the continuous growth of the textile industry has presented a lucrative opportunity to the global ester market. Growing automotive production and sales coupled with increasing demand for ester from lubricant industry is predicted to propel the growth of the market. Rising per capita disposable income in emerging economies along with increasing consumption of cosmetic & personal care products is estimated to drive the demand for ester over the assessment period. However, high cost associated with the ester-based lubricant is estimated to hinder the growth of the market. 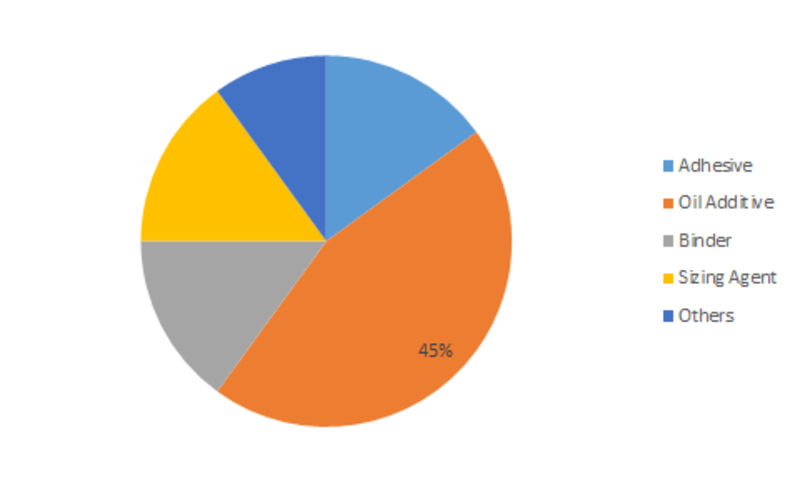 The global ester market is further classified into five regions namely North America, Asia Pacific, Europe, Latin America, and the Middle East & Africa. Among these, Asia Pacific emerged as the largest market share and estimated to hold around half of the market share in terms of value and volume in 2016 and is predicted to register a tremendous growth over the estimated period on account of the continuous growth of various end-use industries such as construction, automotive, paints & coatings among others. The demand for ester is expected to fuel the growth of the market in the various countries of Asia Pacific such as South Korea, India, Thailand, Taiwan, Malaysia, China, Australia, Bangladesh, Japan,  and Singapore owing to rapid industrialization and high adoption rate from various end-use industries.

The Asia Pacific emerged as the largest ester market followed by North America and Europe. North America is expected to be the second largest ester market and is estimated to witness a steady growth owing to recovery of the industrial sector combined with increasing investments to revitalize construction & paints & coatings sector over the forecast period. The U.S. holds the maximum market share in North America, which is further followed by Canada on account of increasing consumption of cosmetic & personal care products along expansion of textile industry. In Europe, countries such as Germany, Spain, Italy, the U.K, and France are estimated to be the largest contributor to the regional market on account of the significant growth of the automotive sector and expanding personal care industry. Latin American countries such as Mexico, Brazil, Colombia, and Venezuela are predicted to witness constant growth due to increasing spending on personal care products and the strong presence of big cosmetic brands. In the Middle East & Africa, various countries such as Qatar, Turkey, the United Arab Emirates, and Saudi Arabia are predicted to register a healthy growth due to increasing mining activities along with increasing consumption of ester based explosives.Recent Development


Verbio AG and Indian Oil Corporation Ltd signed an MoU (Memorandum of Understanding) in July 2021. The MoU will look into the prospect of forming a joint venture company that would use Verbio's technology and expertise to produce biofuels (biomethane (CBG/BioCNG), bioethanol, and biodiesel) and markets them through Indian Oil's network. Renewable Energy Group Inc. and Optimus Technologies teamed together in March 2021 to provide biodiesel to fleets across the United States. Biodiesel can now be used in fleets as B100, or 100 percent blended biodiesel, thanks to Optimus' breakthrough technology.

What is the forecast period of Ester Market research report?

The forecast period for Ester Market research report is 2020-2030.

Who are the key players in the Ester Market?

Which region will lead the global Ester Market?

Ester: Growing demand for lubricant as well as personal care predicted to fuel the growth of the ...